Radiator for the Mind 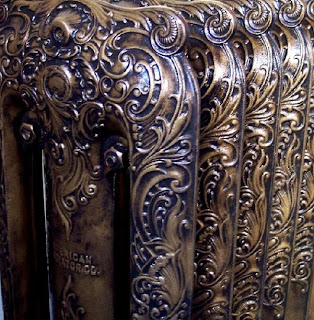 In the heavens above, not in the fabled heavens but in the heavens that are described by our sages as the worlds above, there was once a place where the water gathered into petty and jealous pools of rivalries. The Master of the Universe had to separate these pools by putting a five hundred mile thick barrier or a firmament between them. Wait… I think I need to back up, you see, the water isn’t really just ordinary water; it is a viscous and vaporous condensation of spiritually incandescent and pearlescent… water. This is not only the water of life but the water of everything else as well. Talk about the fountain of youth! Water…I am getting thirsty… for something wet and watery… water…

Ok, back to reality. You see, this story is really about how our minds work. It started with water because this is the substance that leaves our body when we activate its spiritual thermometer by engaging in acrobatic mind maneuvering. This water isn’t the normal water but it is also the same viscous and vaporous condensation of spiritually incandescent and pearlescent… water from the heavens above. Well, maybe I need to back up some more…

You see, our nephesh (our soul and energy source) heats up when it supplies the motor (our minds) with power to run. As our minds turn at ever increasing speeds to follow leads from life and the big plan in an attempt to close the gap between the heavens above and ourselves we get hot. Not hot in the physical sense, although that is also effected, but hot in a spiritual sense. This water needs a release valve as it heats to temperatures beyond our ability to measure. We need a radiator to kick in. we need something to drain the excess fluids from our minds or our motors.

History has shown us that this is accomplished with following God’s commandments. The Torah gives us a release valve and it describes to us how to manifest this release valve in our lives, but this is not all. It also tells us to grow the hair on the four corners of our head. What? Maybe we are all just block heads after all! One thing I do know is that two of these corners are on the chin and that means a beard. Oohhh, now I get it! A beard is a radiator! When we start to rev up that engine (our minds) we need a radiator (our beards) to let the excess water drain and vaporize back into the heavens above! Phew!!! Now I am feeling hot… and my beard you ask? If you didn’t know it was gone… Its back!

So, the next time you see the morning dew, a hail storm, or the most amazing sunset ever, think about the water… not the regular stuff that is inside and on the surface of all of creation, but the viscous and vaporous condensation of spiritually incandescent and pearlescent… water… that was paternally separated by The Master of the Universe way back in the beginning of time.

Shavua tov kulam!
Posted by Dnoll at 21:10
Email ThisBlogThis!Share to TwitterShare to FacebookShare to Pinterest

If a tree falls in the forest…

Long ago, in a time before there was time, there was a garden. This was no ordinary garden mind you; it was a very, very special garden indeed. This was the first garden that was ever created and it was done so in an otherwise barren wilderness. There was nothing anywhere else in the whole universe, accept one thing. And that thing was (and is) so big, so large, and so timeless, that I could never use words and language to describe it. It is a thing that we have come to call by many names and all are Holy with a capital ‘H’. So, not to labor the point too much however, this story starts in a place that can only be described as everything and nothing at the same time. The ‘everything’ comes from what we see today… everything that is always all around us to see, hear, smell, feel, and whatever. And the ‘nothing’ you ask? The ‘nothing’ is also everything around us. The ‘nothing’ is something that we can not see or hear or feel. Sometimes if we are lucky we get a whiff of it though. It smells like something familiar, something wonderful. It smells like we know what it is, if for just a moment, before it disappears into our justifications and explanations of the world around us… you know, the one we can see and hear and feel and yes, sometimes even think we can smell.

There was a time, well that isn’t exactly the word for it… maybe a better way to describe it is an infinite instant, that in this very special garden, before it was or could be tended by any… person, every single plant had never existed, ceased to grow, grown to its mature height, and spread across the universe as if Moshiach had already come. Every tree was just a want-to-be seed as well as resplendent with fruit. It was an instant where everything in the universe was only possible but at the same time, was complete and in this instant, in this garden of gardens, a tree fell. Some have said that this occurred as a result of a forest creature that, because of its treachery, was destined to slither for all eternity. Others say that it was because of the concept of free will or because of something lurking in the world today, the evil inclination, that this occurred, and still others say that it was because of something all together different. These ‘others’ say that is was because ‘we’ needed to see the tree fall. ‘We’ needed to know that there was once a place that was so perfect that it needed to be hidden at the end of a curvy and unseen path and guarded by something that might have looked like General Grievous from the Star Wars movies.

We didn’t witness this tree of trees’ fall with any of our senses and yet, we know that it fell. We can see the results of its calamitous plunge throughout our lives and still we ask ourselves the simple question, “If a tree falls in the forest and no one is there to witness it, did it really fall?” of course it did! Look around already… or at least take a whiff. You might catch a scent of that ancient and, at the same time, imminent tree; that tree of everything and at exactly the same time, that tree of absolute nothingness in a garden where nothing is as it seems, and the ‘nothing’ is really ‘everything’.