Beyond the Tin Can, Mazal Tov, and the Indispensable Parts of One 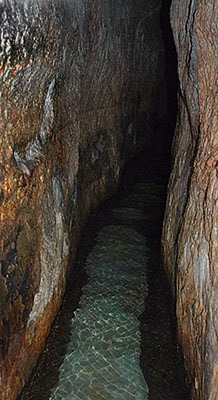 Mazal Tov to my nephew Daniel, family, and friends! He had his Bar Mitzvah last week and has now entered the ranks of minyan goers around the world. We went up to Jerusalem earlier in the week for his Torah reading at the Kotel, which he pulled off without a hitch, and at the last minute before driving home, I decided to join him, his father, and some other friends spelunking down King Hezekiah’s Tunnel to Shiloach Pool.

Just for a little background on Hezekiah’s Tunnel: according to recent radio carbon dating, it was dug about 700 B.C.E., which corresponds to Biblical references to the tunnel in Kings 2, 20:20; Chronicles 2, 32:2-4, and 32:30. The tunnel runs 131 feet beneath the City of David, just south-east of the Old City in Jerusalem. According to the Tanach (Hebrew Bible) and the plaque that was found inside the tunnel (robbed by the Turks and now languishing in an Istanbul Museum), the tunnel was dug in order to safeguard Jerusalem’s water supply from the attacking Assyrian army, led by Sennacherib in 701 B.C.E. The tunnel meanders from the Gihon Spring, which emerges above the Kidron Valley, flowing with water from under the Temple Mount, and follows the entire length of the tunnel to the Pool of Shiloach (Siloam or now known in Arabic as Silwan). King Hezekiah, in a feat unmatched at the time, carved the winding tunnel, from two directions, through solid bedrock.

Another nephew of mine, that is all grown up and practicing plastic surgery in Los Angeles, was also visiting with his family and I helped take care of his oldest son Nathan on our adventure through the tunnel. We all drank water, ate ice cream, and went to the restroom before the point of no return and sure enough, as soon as we got into the tunnel, Nathan (the poor kid), had to pee again. We asked a guard there where he could go and the only (official) place was the restroom at the other end of the tunnel… I left it up to Nathan where to go and he decided to hold it (oy) until we got to the other end.

The tunnel descends down, covering about a third of a mile, and we traversed it through first hip-deep and then ankle-deep water, all the tall guys having to walk hunched over most of the way to avoid head-banging the rock ceiling. After about a half of an hour of fake coyote and bat calls, flashing LED lights, and splashing feet from every direction, finally we emerged into the sunlight, a little wet and a little sore from bending over for so long.

I wanted to explore some more, but Nathan was doing the ‘I gotta go dance,’ so I hightailed it to the restroom with him. I asked the guard where to find it and he said to go down the stairs and to the end, where there is a gate. Simple enough, so we trotted down the stairs and into another excavation site where 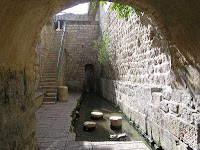 a lecture was progressing. I then entered another cave like tunnel-opening and turned around to find three little kids following me (I guess we all drank too much and evidently felt uncomfortable going in the water that emerged from under the Temple Mount). So we headed up the new tunnel, which curved slightly so we couldn’t see the end. I started to get worried about 5 minutes later when the rocks started to get very slippery and I actually slipped hard once, just catching myself as my nose came to within about an inch of the mud and slime on the tunnel floor. Now I was really starting to sweat, with mud on my hands and knees, a bleeding toe where it had caught a rock, and Nathan doing the ‘I gotta go dance’ just a little faster… I could either turn around or I could keep going (it was now 6-of-one or half-a-dozen of the other, if you know what I mean), so I kept going forward.

Skip forward to Shabbat... where we celebrated Daniel’s Bar mitzvah some more with aliyote to the Torah, throwing more candy at him, another Kiddush, lunch with some great friends, and finally a party when Shabbat ended with a magician and everything (Kol ha kavod to his mom and dad!). While at the party, I got into a discussion with a friend about all kinds of nonsense relating to the nature of the Universe. She had learned that eastern philosophy advocates the nullifying of the self, in order to become one with the universe and that Judaism advocates the elevation of the self by making the self Holy through Kiddushah (kosher 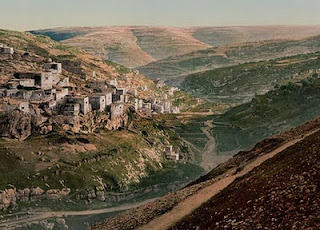 food, remembering and protecting the Shabbat, keeping the Mitzvote, and so on...) in order to reconnect to the Creator. We never actually finished our mystical, magical, nature-of-the-Universe discussion, since we were interrupted by the magician’s magical, ‘slight-of-hand’ performance, so we haven’t figured out the nature of the Universe yet, but I did catch just a glimmer of it as I thought about it later.

Think about how a motor works. When I was in 6th grade, I won a contest in math class on an extra credit project. Our teacher had stored a huge jar of M&M’s on a shelf next to his desk for the whole year. It was the prize for completely taking apart and then putting back together an internal combustion engine. So, one day after all the math tests and monotonously grueling learning was over, the teacher cleared out all the chairs and desks from the center of the classroom and parked an engine on a large table, right smack in the middle of the room. I can’t remember much about it, other then the chain and hoist that brought the engine in, seating the engine gasket, the spark plugs, and the pistons and valves, and that my team and I ripped through that engine like it was the last day of math class, ending the year with the big prize and very large grins. I know, you want to know what happened in the tunnel...

OK, back in the tunnel, there were now three little kids doing the ‘I gotta go dance’ and they were all bouncing around the mud covered walls and asking, “Are we there yet?” I was limping and watching my footing very carefully—if I could only be calm and reassuring to the little tikes... Another couple of minutes went by and a crack of daylight began to show. We were all relieved to see the exit sign and had no idea what we were in for next. Well, I think the kids still don’t know, but after we came out of the tunnel and walked up the stairs, we found the restroom. They took turn

s and then we continued on to the street. The tunnel let us out right in the middle of Silwan. You know... the place that you read about in the news; the place that rioted and burned cars last Tuesday, only a week after we had been there?

There is a major clash of culture going on in Silwan now. The Arabs built their houses illegally on top of ancient ruins and ancient graves. The Jews want to excavate the City of David under the illegal shanty houses, build a public archeological park, some retail shops, and generally explore more archeological facts about how Jews have been in Jerusalem a lot longer than the Arab settlers from Turkey and Egypt have been. As you can imagine—chaos is an ongoing phenomenon. We made it back alright. We all held hands, stayed on the side of the road (moving for the speeding cars that seemed to be playing chicken with us), and tried not to make eye contact with the Ramadan starved inhabitants (Muslims fast during the day for Ramadan) of the Silwan Shanty Town.

I never found out if the engine actually worked, since it was disembodied from a car; however, this is my point. Each one of those little parts was a whole thing within itself. Each piston was a beautiful, shiny thing glistening and waiting for its turn to shine. The problem is that each one of those parts was absolutely nothing without each of the other parts. That piston could have ranted and raved all it liked about how the engine wouldn’t work without it, and it would be right. The point is that we are all parts of an engine, each and every one of us. We can’t do anything without each other accept rant and rave about how gloriously important we are, effectively removing ourselves from reality. Reality is when that engine starts up and every one of us is tuned into the whole, tuned into the oneness of the engine.

That is eastern philosophy in a tin can. The difference between that and Judaism is that once you have your engine purring like a Lamborghini, you need someplace to go. If there is no place to go, eventually all the parts get bored and just want to be the center of attention again, leading to more chaos like I described above, blown head gaskets, and broken down Junkers on the side of the road. Inner peace can only last if we have a higher purpose.

It was explained to me like this: peace is when two opposing forces give of themselves fully to the opposite force, causing stability. This is the exact opposite of what we are taught peace is all about; you know, can’t we all just be a little more alike, compromise a little? Maybe then we will all get along. This makes sameness, not peace. What we really want to do is to work together, all of humanity from the opposite ends of our philosophical leanings, give it over to the opposing force completely, fire up that engine, and take that wondrously purring hotrod straight to the Creator, where you know that He will be smiling and cheering us, as we blow through the finish line together, with big grins and M&Ms stuck in our teeth!