Faith, Art, and the Junk Collectors 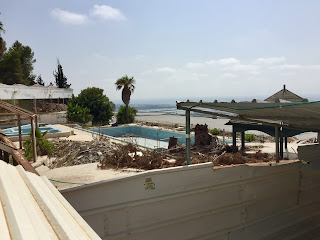 It was mad hot. There was no aircon in the family van. There were places for my feet on the floor if I jiggled them a bit … and then we skidded to a stop, again. Invariably we left skid marks at the recycling areas all over our little hilltop/beachside town of Zikhron Yaakov. We were building an art center smack in the middle of town, and really had no choice. There were limited resources and we needed to recycle, reuse, refurbish, and repurpose … or RRRR for short. So, growling in the heat and humidity, with the windows rolled down so a hot wind would whip across our faces, we collected the junk that had been thrown out by our neighbors. Talking about art and artists of old, careening through the streets with junk teetering from our roof and flowing into our laps, we were living. My partner, a religious man, had already developed an eye for the good stuff. I learned as we went how to RRRR, but understood right away the level of faith required to do so.

Faith, I believe, comes much easier with limited resources, and life can be a hell of a lot more fun when it is less planned out, and even challenging at times. For instance, in my mind’s eye I can still see the look on a woman’s face as she careened around a corner on a mountain road in Madagascar with her child in her lap, while riding a homemade go-cart carrying hewn stones down to the family’s shack. The stones would be pulverized by hand into gravel for building materials. As she banked those treacherous turns, she wasn’t thinking about the cash at the end of the day, even though it would mean food on the table for her offspring. She was thinking about the line she had chosen while riding a cart down a mountain road. She was grinning with glee as the go-cart, most likely a cart that her husband had made by hand from collected junk and tree trunks, held the road and then slid around the corners as both she and her offspring leaned into each turn.

On one of our forays into uncharted dumpster alleys my partner and I found ourselves wandering around a once grand hotel built into the hillside above the sea. The pool glistened with a sparkling blue, like a mirage in the desert, since it was empty of water, painted blue, but full of debris. The hotel structure was broken and exposed, rusting and crumbling down the cliff it was built into. We entered a courtyard strewn with makeshift furniture and dead potted plants, where an elevator of sorts awaited our arrival. It was a cable car that rode on a track down the cliff side. Once we entered it, and the door closed us in, we began to descend with a squeaking rumble pocked with twangs and bangs. The levels were marked as we went, and just as I became used to the pattern cascading by us we stopped suddenly, causing me to lurch into the glass window that had revealed to us our descent through a tunnel down the hillside. The door opened and once outside the cable car, the dilapidation of the building was less jarring as much as its vast emptiness was. On occasion a person would wander out of a once hotel room and stare as we passed, like someone not sure if they were yet afflicted with the latest zombie infection.

The state of the structure reminded me of a building I saw in Baja California recently. It was also a hotel that had been left to the elements after becoming a failed venture due to the conflagration of imported design techniques and building materials with a class five hurricane. There were stories told of couches flying out of windows as the wind hit the building, breaking the glass and flattening the drywall right through the hotel. All that was left were bones and lawsuits with billowing curtains fluttering in front of the sunrise over the Sea of Cortez.

At first I felt put upon every time we skidded to a halt in front of some pile of junk, but as time moved on I collected patience and smiled along with my partner in our art center endeavors. I began to trust that there was a higher purpose as we sweated fumes up and down the hills inside our squeaking van. I developed faith. It is said that every day we must put our energies into developing faith. Reason comes naturally with a little time and study. Faith, I’ve found, is a daily adventure. When I wake up in the morning it takes me a long time to actually get up. Then on my way to the bathroom I mutter a prayer thanking God for giving me another chance at living. On Friday morning last week my morning prayer was more of a mumble than usual. I had finished collecting junk for RRRR for the week, but it was time to remove a tooth that had been with me and my biosuit for a lifetime. After hitting my head on a palm tree while giving the dogs water, concussing my brain as it sloshed inside my scull, stepping off a step backwards and stumbling while ensuring that whiplash would set in as well, I cracked two teeth, one of which would need to be removed since it died during the accident. After almost two months of debilitating pain and the inability to eat properly I was finally going to pull it.

I sat in the dentist’s chair and … as the hygienist and dentist spoke behind me in Arabic, I began to get claustrophobia. My white head became whiter and a cold sweat began to breakout across my forehead. I get panic attacks all the time, so am used to them and know what to do when they hit. If I’m feeling vertigo from being too high up, I descend. If I’m feeling confined and compressed, I stare into the distance. Luckily I had a view out the window of the dentist’s office to the north, towards Mukhraka. This is where Elijah the prophet battled the Ba’al prophets with a bonfire lit from heaven. He had such faith that he even dowsed the altar to be burned with water before praying to God for a sign. Today a Franciscan monastery stands on the site written about in the Bible. From its rooftop the view is stunning for kilometers around. It only took a minute or two to pull my tooth, and the dentist and hygienist were stellar in their communication, switching freely from Hebrew to English whenever they wished. All it took to quiet my worries was a little faith, and a great view.

We’ll be opening our doors to the Zikhron Art Center in September. We are planning on having two operating studios for teaching art to children and adults, a professional gallery that will show local and regional artists work, and a coffee house featuring intimate gatherings for poetry, storytelling, and acoustic music. If you are in the area, or just visiting, please stop by sometime; we’d love to show you around. Please visit us on our Facebook page, also, and have a great day!