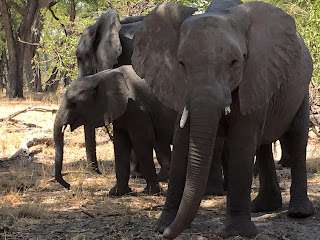 Seeking perfection in the world can get very myopic, in the sense that perfection itself is one of the most simplistic ideas there is. All we really have to do in order to arrive at so-called perfection is to let go of our ever-present, preconceived notions of what we think the world needs in order to be perfect. I know this is circular logic, but a perfect loop 'is' the closest thing to perfection that we can mentally muster. With this in mind, all we can do while we have the honor and privilege of visiting this chaotic world, with all of its darkness, love, and it's beauty, is to try our best to live big, making as small of a ripple as we can while we do it. 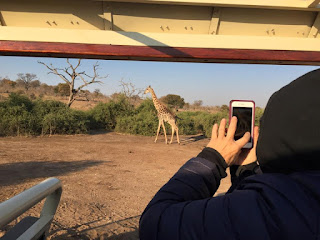 Before I left for Africa, I felt I was making so much random noise that I forgot what the world even sounded like. It's hard to filter through the egocentricity that inevitably surges when given the chance. It took some time, as well, after landing in the bush of the Botswana wilderness, to clear my head from the media driven news that I had been trying so hard to avoid and ignore. My mind was continually plagued by my own existence, whether existentially due to the political folly and vapid cruelty that had been making ripples around the region, or from my own feelings of inadequacy professionally and artistically. 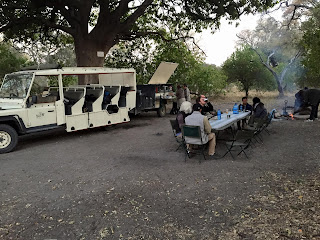 In Africa all was laid bare. Our journey began with a decision to freely tell those that we encountered along the way that we lived in Israel, something that we didn't totally permit ourselves while traveling in Indonesia and Malaysia, due to the politics of religion. While traveling in that part of the world, the locals that we did let in on our little secret, regardless of their religion, were ignorant but sympathetic, many of the fellow travelers we met tended to be ignorant and unsympathetic, due to their reliance upon mass media for their roots to gather sustenance from. This dynamic was not so different in Africa, but after time in the bush our individual worlds began to meld, becoming a "bush family, or tribe," as our Botswana bush guide, Eddie, stated in our introduction to the bush. 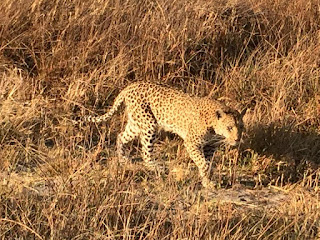 As processions of giraffes, elephants, and zebras crossed our tribal caravan's path, the preconceptions and ignorance from all members of the tribe began to slough away, including mine. There was that first night, when, after trudging in and around our campsite smashing, eating, and farting, an elephant pushed over an entire tree, thankfully in the right direction, a few meters from our tents. This episode began the tribal cohesion process; but, it wasn't until one member of the tribe, a young woman on her honeymoon with her husband, spotted a leopard behind a thicket that ultimately initiated us all. Together we witnessed this leopard hunt, catch, kill, and eat a bird at very close range. From that moment on we were forever connected by this one, collective, bush experience. 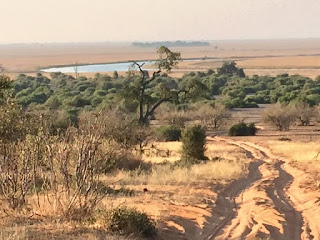 And this collective only increased its connectivity as an ever-increasing amount of giraffes, elephants, and zebras crossed our nomadic route through the bush, until we witnessed a tragedy of the wild, an elephant carcass stinking alongside the road. It had died of anthrax poisoning, an affliction that they can suffer from licking old bones, of which there are plenty strewn about, bleaching in the sun. While we waited for one of our younger tribesmen, sick from the smell and the bumpy ride, to quietly relieve himself of his breakfast behind a bush, I noticed a game camera chained to a tree in order to ensure the safety of the poor creature's ivory tusks. The poachers in Chobe are ruthless and dangerous, coming mostly from Namibia across the river; where, once with binoculars we even witnessed a ranger (apparently) making a deal with a local, as the local hacked into the tusks of another dead elephant with an axe and a hacksaw. 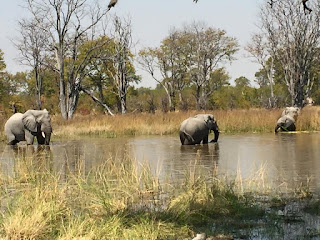 The uncomfortable beginnings of our adventure into the wild, coming from separate and even opposing world views, had disappeared completely, having experienced, together, such a foreign and wild environment. Through our collective experiences in the bosom of nature, we had become one tribe, separate from the rest of the world. However, it was still apparent that our leader, the chieftain of our nomadic bush tribe, Eddie, was still only a guide for ecotourists... until just before dusk one evening, late in our journey together. It started, as usual, with a procession of zebras crossing our path. Then a large dust cloud was spotted ahead (we found out later it was from stampeding Cape buffalo). 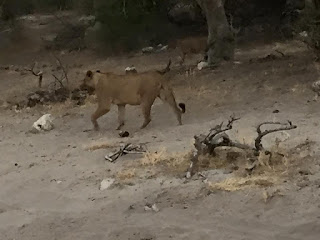 Eddie told us to sit down and then hit the gas. We flew down the bumpy dirt road until we came to an abrupt stop, dust flying everywhere, and out of nowhere a pride of nine lions trotted down from the hillside right in front of us, cubs and all. The large male was missing, most likely guarding a kill they had made, since their bellies were so fat that the cub's bellies were almost dragging across the ground.


Our entire tribe was shocked into silence, accept our guide, who began to explain to us some of the dynamics of a pride of lions, and that they were probably headed for a watering hole. We were sitting in an open vehicle, with no roof and no sides, but the lions paid no attention to us as they moved through, as if we were inert and unappetizing. After they passed our tribal vehicle took off down the hill, four-wheeling right up close to the watering hole, and we watched... 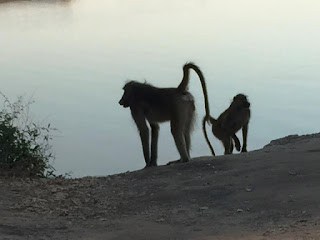 We were all flabbergasted, except for our leader, who looked quite pleased with himself for giving his guests a really good lion sighting, until we noticed one of the lionesses stalking up the hill away from the watering hole. Then something screamed and a quick dark spot began to bounce around, running wildly into another lion at every turn. It was a baboon that had been caught in the tall grass next to the watering hole with no trees to escape into, screaming for help from his friends... help that could never come. That was the moment that our guide joined the tribe he had created, muttering to himself, over and over, "Oh my god, oh my god...Oh my god..."

We all watched in fascination, and in horror, for as long as we could, but the light was fading and we had to depart back to our campsite, a ten minute drive into the night. Later, while zipped into our sleeping bags, zipped into our little dome tents that were sparsely scattered about, listening to the roar of lions, the baying of hyenas, and the crunching of elephants, even though we had finally become a tribe of nomadic bush people, we trembled and dreamt of a larger world, full of darkness and full of wonder. In the African bush, our ragtag group of way-fairing tourists and one time idealists of the ego finally had arrived at perfection. We were One.