Bali and the Last Wave 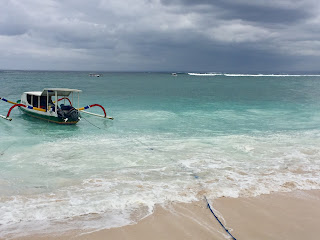 When I was younger, the world was a much smaller place. There were neighbors, parents, friends, and my little brother. We lived inside the Green Belt, in Laguna Beach, California. Laguna had a local reputation as an artist’s colony, with festivals and happenings all around town, which was separated from the commercial hubbub to the north, and from the orange grove dotted developments and track-homes to the east, by a vast land of rolling hills and sagebrush. The Green Belt was sanctified as untouchable open-space, even when it was owned by one of the largest development companies in the world, the Irvine Company. My dad worked for them as an urban planner, designing living environments for people moving to California in droves.

My dad was born in California, as was his father, as was I. My first born son was also born in California, but because of instabilities produced by over crowding and commercialization with no end in sight, we left the Pacific Ocean to move far inland to Colorado. After facing first-hand the Rodney King riots in LA, we felt more comfortable raising a family without the fear of random violence, as well as the unsolicited brainwashing of a generation we saw around us, to consume, and to replace consumables in order to consume again. Things were once prized for years, back in the space and time I grew up in; or, they were prized at least until they were grown out of. Then they were passed on to another generation and used again, possibly even prized for more years to come.

Laguna Beach started as a prehistoric paleo-Indian civilization, but once the European conquerors took over, the area was named in Spanish as Cañada de las Lagunas, or in English: Glen of the Lagoons. Then, in 1848, the area was ceded to the USA after the Mexican-American War. In 1927, the city of Laguna Beach was incorporated, upon which time urban planners from New York City overlaid a grid from afar and called their map a street map, which is why there are so many steep hills in Laguna ... and why Laguna became a skateboarding capital in my time, which led directly to surfing for most of the kids growing up inside the Green Belt.

I was born in 1962, and have a vague memory of the moon landing, and an even more vague memory of traumatized parents from the assassination of JFK. My mom sometimes sported the look of Jacky O., hairdos, sunglasses, and all. I guess the beginning of rampant commercialization began way back then, maybe even before, in the 1950’s. It’s a strange transient life we inhabit. The world keeps turning, the continents keep drifting, and we keep thinking we run the world ... uhh

Just now, while sitting here on the Balinese island of Lembongan writing this piece, another earthquake shook the continental plate beneath my feet. Like the first quake I experienced last week on the mainland of Bali, I felt two distinct waves. The first wave was a wake up call with a back and forth motion, indicating that something might not be quite right with the world, then, about one second later, the larger motion of an up and down wave struck, the last wave, confirming my suspicions. Quiet descended upon the beach-bar around me. I ran out onto the open sand and turned to look back at my neighbors, still sitting there. They all stopped what they were doing and looked up, finally paying attention to our world for the briefest of moments. Then we all went back to what we were doing before the ground woke us from our slumber, as if we actually ran the world.

Growing up in California helped a lot to understand what was happening to the Earth’s crust during the earthquakes I’ve been experiencing in Indonesia, and so did that college geology elective I took as an undergrad. Indonesia is a card carrying member of the Ring of Fire, a region surrounding the Pacific Plate and home to 75% of the world's volcanoes and 90% of its earthquakes. California is on the opposite side of the Ring of Fire from Indonesia. I’ve experienced many large earthquakes, once as a child even getting tossed from the top bunk of a bunk bed, only waking once impacting the hardwood bedroom floor. Occasionally there were aftershocks, but, regardless, for at least a half an hour, my parents always huddled with my brother and I in the hallway under a main arch. My dad, who had grown up with earthquakes his whole life, and understood architecture professionally, said it was the safest place to be during an earthquake.

The buildings usually survived in California, if the epicenter was far enough away, due, I suspect, to stringent building codes and proper urban planning. However, the death toll in Lombok, an Indonesian island where the quakes I experienced had their epicenters, keeps on rising. The structures in Indonesia are often built poorly, with economics driving construction parameters instead of safety. The poorest neighborhoods seem to get hit the hardest, even to the point that the epicenters may regularly fall smack in the middle of lower economic areas; maybe because older areas in a city are older because they tend to survive earthquakes better, and as a result older residents and land owners tend to be situated in the older areas. Regardless, it’s policy here in Indonesia to exit a building during an earthquake, no matter where you are ... uhh 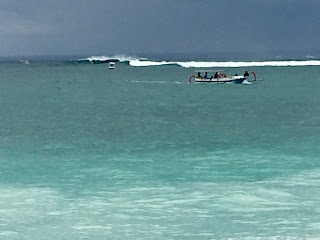 Sitting here, just now, while writing this piece on the porch of a little bungalow I rented, I realized that I have a perfect view out to Shipwrecks, one of the biggest and scariest surf breaks in the world, and I noticed because the waves look about double overhead, stormy frothing beasts that glow turquoise when the sun is able to stab through a rain clouded sky. The line-up is crowded, which means every few waves a desperate soul drops in and slams face first into the shallow waters above a sucked-out reef. I came to this island in order to try and relive some of my glory days spent surfing on the other side of the Ring of Fire, in California. I was rarely able to surf once I left the Pacific Ocean behind, so it wasn’t until leaving Colorado and moving to Israel that the surf-bug was able to ignite again, but the Mediterranean Sea just doesn’t have the same kind of raw soul that the Pacific did.

That raw soul lives here, on Lembongan Island. Over the last two days I’ve taken a beating riding Razors, named for the sticks and metal poles that once peppered the water’s surface for harvesting kelp. The first surfers here rode waves through the spikes, which gave the break it’s name. The spikes are now gone, but the reef is nearly as deadly. The break is primarily a left, but because of the crowds on the waves, and because I’m regular foot (left foot in front), the guide I hired said I could try the right, a short, fast, sometimes close-out wall that shot down the reef directly towards another break called Lacerations. My local guide was a thin and muscular surf-Hindu, with long, dark, sea-soaked hair and sun blackened skin, named Thabu. When he caught a wave he appeared to fly over its surface, like a demon butterfly, carving and streaking, momentarily fluttering, then disappearing behind the whitewash, only to reemerge in order to check on me in an encouraging, even a beautifully, loving kind of way.

Having been land-locked for so many years, my surfing skills and abilities have faded considerably. In hindsight, it could be that my wave knowledge and comfort with rough waters may have given my guide the wrong impression of my abilities and strength as a surfer. It’s quite possible that my bravado recalling the good old days mislead him as well. To position for the right, I needed to stay just inside of where the outside sets broke, an error in math that didn’t escape me at the time. After catching a few nice rights, each one riding alone on the wave, without getting shinned by loose boards emerging from the tourist washing machine rinse cycle, one of the day’s monster sets loomed above the sea-calm in dark turquoise lines. I began to paddle, hard, digging into the waters below me. The first wave of the set arched up and slammed down in front of me. I managed to stay on my board, diving beneath each of the oncoming mountains of foaming whitewater and emerging from beneath each wave’s broken back, already digging towards the next Goliath bearing down over the reef.

Fear didn’t bite until my strength was sapped, and even then it didn’t compare to getting shoved violently in the back while trying to exit a restaurant as the first Lombok quake hit us and the first taste of panic bit. It was back on the mainland of Bali, in Ubud, a place that has been commercialized almost beyond recognition from my last visit just five years ago. Upon first arriving in Ubud, my wife and I began to reconsider spending ‘any’ time there; it was once our favorite place in all of Bali. Traffic came to a standstill almost every day, for hours at a time, and the sidewalks were so full of people that pedestrian traffic flowed into the rain-soaked streets. The same cavernous sidewalk holes were present, something I didn’t mind the last time I visited, but because of the crowds, they became treacherous as everyone jostled about for position, gawked at the latest Bali-fashions, and admired each other’s consumption of yuppie yoga plumage and skin ink. And, the beaches of Lembongan Island were not much different.

As I paddled back to the boat that had dropped us at Razors to surf, my arms barely rising above the surface of the water, I realized what must have happened to the world. I was too tired to think about anything besides my arms moving in the direction of the boat, and my lips kissing the sea as I attempted to inhale air. The last wave of the day I rode on my belly ... as far as I could go, the other tourists doing cartwheels to each side of me like swans in a bird show. As I slid across the water, if only to get that much closer to the boat-ride back to shore, I realized that our species could very well be riding the last wave, after an exhausting run of it. But, even if that is so, I also realized that it could still be the best wave of the day.

And, blessings to the families of lost loved ones on the Indonesian island of Lombok; it has been a real tragedy in our midst.

For more photographs of Bali and Nusa Lembongan, click here.