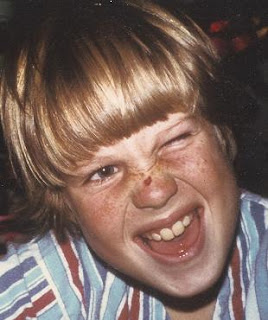 I was born in a hospital in Tustin (I think), California, The United States of America, on October 30, 1962. (Thanks Mom!) (And see picture of me in high school… couldn’t find any real baby pictures, oh well) that makes me exactly 45 years old… tomorrow. Happy birthday to me!!! Well, wait a second. My Jewish birthday is Cheshvan 2, 5723. What exactly does that mean? Do I have two birthdays, or just two calendars? If the former, then because of the combined effect of having two birthdays every year I would have been 89 on October 14 this year and tomorrow I would be 90 years old. So, that sounds like a bad idea. Nothing against being 90 mind you, I just want to remember a little more for the time I put in.

So that just leaves the possibility of two, totally separate and distinct, calendars! But how is that possible you ask? Can we really live with dates like October 30 and Cheshvan 2 at the same time? And just to make it more complicated the dates are never the same every year. Next year my birthday on the Jewish calendar is on October 31 on the Gregorian calendar. This is because, I think, that the Gregorian calendar (or the Luach Notsrim, Christian Calendar) follows the cycle of the Earth as it revolves around the Sun (accept for Easter which follows the Moon for some reason) and the Jewish Calendar follows the cycle of the Moon. Neither calendar is completely accurate so they both need to add some time every once in a while to keep pace with the ever revolving and evolving Earth. The Christian Calendar has a leap year in which the month of February has an extra day sometimes (don’t quote me…) and the Jewish Calendar has an extra month of Adar every few years (again… don’t quote me).

So why is all of this important you ask? For me, it all comes down to seeking our place in the Universe. If we ask why, then we either have to search for the answer, or just be OK not knowing and maybe never knowing. Naaah, that sounds really boring to me. Let’s explore the question of… why???

I think that it all comes down to a Universe that is multi faceted and ultimately complex. I don’t think that we can ever really know the meaning of it all. How could we possibly know where we came from and why we are here? It has to be different for everyone and everything. For the Atheist Scientist it must be about proving, once and for all, that we descended from apes and that when you die, you really cease to exist. For the Buddhist monk it must be about having complete harmony with the Universe. For the devout Christian it must be about becoming so pious and G-D fearing that you know the afterlife will be in Seventh Heaven. For the Jew; I am still exploring that one, as you can probably tell… and who knows where it will lead.

But, since it is my birthday tomorrow (or it was a week and a half ago depending on your calendar) I want to tell a little story that I heard from Moshe, my friend from the Yeshivah, about the concept of creation and evolution. It goes like this…

“There was this guy that was on an airplane with his son. This guy happened to be a Rabbi and sitting next to them on this plane was a renowned scientist that specialized in biology. During the flight, the biologist noticed that the son of the Rabbi took tremendous care of his father. The son of the Rabbi asked his father many times if he would like something from the flight attendant and if he could get him something to make his father more comfortable. You could tell by the fathers face that he really loved his son, and likewise you could see by the sons face and actions that he really loved his father. As the flight was coming to an end the biologist decided to break the sterile front he had maintained thus far into the flight. He asked the rabbi how it was that he had a son that was so caring and respectful of his father. The biologist said that his son was invited to come on this flight as well and to attend a lecture at a very prestigious university as a guest to the guest of honor, his father, and his son had declined. The biologist’s son said that he had his own ‘stuff’ to do and couldn’t be bothered with it.”

“After a moment of thought, the Rabbi answered with a question. He asked the world renowned biologist if he believed in G-D. The biologist answered that he believed in evolution. The Rabbi said that must be the problem”.

Then he said, “You see, in our belief, when we were created by G-D in heaven, the first man was Adam. He was the proto human being and was closer to G-D then any of us. As generation after generation descended from Adam, they became more and more distant from the greatness of G-D, the almighty creator. My son only wants to reach back, to the moment of creation, to be as close as he can with his creator, Hashem, our G-D. Your son on the other hand, has been taught that his most ancient ancestor is a kind of… monkey. He is just trying to run as fast as he can from his ancestry, or in other words, from his father.”

With that, I will let you all think about life, love, philosophy, art, genetics, psychology, religion, spirituality, and last but not least; the life to come… or not, depending on your point of view.