The Golan, Safed, and the Arsim next door 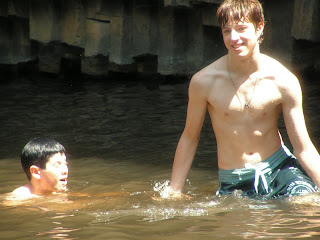 We have been exploring some of the Golan Heights recently. Well, not really the hights but the rivers and pools. Zach explored Nachal Zavitan with a really cool new adventure group that my brother-in-law Abba sent him on with his cousins. Wow, Zach really changed over night on that one. More recently, the whole mishpacha (family) went with one of the same group leaders on a trip to Nachal Jahudiah and hiked through water and canyons that were truly amazing. We all jumped from a 10 or 12 meter cliff into the bricha (pool) at the bottom of a water fall and then hiked and swam down stream. At one spot everyone needed to climb down a ladder and into a long pool that we had to swim through. There were so many people that had to climb down that there was a line to do it. I kept looking at this group of ulra-orthodox people, you know like you see in the movies with black hats and everything, and wondering what the plan was. After all, we had our cool (Teva – means nature in Hebrew) river sandals and camel backs with dry bags for our stuff. They didn’t have anything accept big black hats and long black coats (and it was hot out too!) they didn’t even pause. They slipped right into the water, hats and all, and swam across. Yikes!

This week I took a day off of work to go to a place called Bricat HaMeshushim (hexagon pools) and spent some time with the kids before they go back to school. This is an amazing hike that starts, as all these hikes do, in a hot dessert environment and continues down into a wadi (canyon) to the bottom, where there are the most amazing pools of water and lush growth. This particular hike takes you to a pool that was cut through a volcanic plug that had dried slowly, causing the magma to crystallize into tall hexagonal conjoined pillars. Many of you may be familiar with something similar in the States called Devils Post Pile. Anyways, we spent some time swimming and hanging out and then we hiked back to the car and decided to drive to Sefad.

Safad (pronounced Svaat) is one of four cities (Safed, Hebron, Jerusalem, and Tiberius) in Israel that have been continually occupied by Jews since the time of the Israelites. Well, that isn’t completely true… I think. Jerusalem’s Jews were wiped out and kicked out for a few years by the invading Crusader armies, and in more contemporary times, the Arabs killed the Jews that lived in the Old City of Jerusalem. Also, in more recent times, the Jews were slaughtered in Hebron by the Arabs. But besides these small breaks, these cities are full of amazing history and Jewish culture. Safad is considered a mystical city because of the receiving of the Zohar, a book that… well, that is a long story (but well worthwhile!) If you are interested check this site out. http://www.kabbalah.info/engkab/book_1/book1eng_ch04.htm
I loved it in Safed. If it had an ocean, it would be perfect to live in for me. Well, it is pretty close, only about an hour and a half away. I’ll be back…

One thing left… ‘The Arsim next door’… that is pretty simple and no, I didn’t save the best for last. These people are really annoying. From the moment we moved in here the dog next door has been incessantly barking at exactly the times when it seems to test me the most. You know, times like when I need to get to sleep because I need to wake up in 6 hours to go to work. But that is not why the neighbors next door are Arsim. By the way, Arsim is a word that, I think is derived from English. Can you guess the word? If you need a clue, the answer is another word for donkey. Anyways, Zach informed me that the guy that stole his bike from behind him a few months back, rode it for a while and trashed it up a bit, and then had it removed from his house by the police, was seen at one of the many misibote (parties) that the Arsim kids next door keep having. The thief does live right up the street so I just hope he doesn’t put two and two together or we might have all kinds of problems like the broken light in the front of the house that I suspect was related to one of these misibote. Well, to be fair, they sometimes are quite nice like the time when they planted our front walk with bulbs… OK, just relax… what was that mantra again… ‘We have a dog, we have a rabbit, and we live in the Middle East…ok, ok, enough of that one…we might not have rabbit for long anyways. Josh wants to be done with it and of course Adele has been done with it since we got it. Adele and Josh went to one of the local pet stores to ask what to do with it and the guy there replied with, “just let him go in the forest. He will make a great meal for some wild animal out there.” Yup, this is the Middle East isn’t it… can you imagine that happening in Boulder? I think not. So we shall see about the rabbit. Adele still wants chickens and maybe we can use the cluv arnav (rabbit cage) for them! Aye yaey yaey…