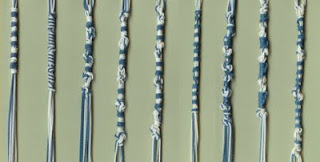 There is a string that attaches to the cell inside my mind that is responsible for the next essence of an action that I will make. That string extends from there outwards as it is tugged by the forces in the Universe. To be really smart, I just need to pull back on the string and force the forces in the Universe to my will. The problem is that in order to pull the string, first, I need to know that it is there. Second, I need to know that it is possible to pull. Third, I need to know how to pull it. And fourth, I need to pull it with the right intention.

It is all a matter of who the puppet is and who the master is. I operate on a daily basis as if I were the master; however, the real master is most often the string. I tell myself that I am justified in my thoughts and actions and that I can pull the string anytime I like–which is really the string pulling me... So, I guess I know the string is there. Next, I need to find the end of it. This is something like looking for my Tzitzis in the morning before I say the Shma. They are always wrapped up in my Talit ends and clinging to my back. I have to pause to find them and then I forget what I am doing. I do a kind of spiritual stutter and try to pick up where I left off, but it never really is the same moment.

So when I figure out where I think I was, then I can really pull the string. I tell myself that I am really pulling the string and then, the Universe is going to move. Nothing–I am left standing with tassels between my thumb and fingers wondering... maybe it is possible to pull the string. Then, without warning, I get a post-it from Heaven. The whole time that I was trying to find the string in order to pull it, the forces of the Universe where coaxing me in the right direction and trying with all their might to push the physical string into my physical hand.

I guess this is the intention part. When I am finely tuned enough, I can seek the proper help in order to pull the string of the Universe and bend it to my will. If my will is good, the result in the world is good. When it is not, the result is not. Now we have a whole new problem. What is good and what is not?

Let’s explore an experience that I had on the way home from work the other day. I was walking up the hill next to the fields and I heard a rustling in the bushes across the street. I stopped and looked for just a moment and was just in time to see a pack of jackals emerge from the other side of the road and jet towards me. Two saw me immediately and returned to the cover of the bushes but two continued until the middle of the street. They both saw me then and one decided to continue on the same trajectory, passing about a meter in front of me. I could see the individual hairs on its back. The second jackal, after seeing me, stopped abruptly by leaping about a meter and a half straight into the air while doing a summersault and at the same time returning from where it came, all in a fraction of a second.

Is this good? Is this not good? It is hard to say. I find it easy to make sense if I substitute the word good with the word truth. Now I can say, is this truth? Is this untruth? The jackals were really there, even if no one else around me saw them, so, it must be truth. Recognizing truth is good. So now I can define what good is. Good is the knowledge of truth. So my intention needs to be the seeking of truth in order for me to pull the string that manipulates the Universe. The more lies I tell myself, the more the Universe has its way with me. I will leave you with a small story about a rabbi and a student.

One night, when Yehudah Aryeh, the future author of the Sfas Emes, was a young boy, he studied Torah the entire night and did not go to bed until just before dawn. He slept only a short while and then woke later than usual. His grandfather, Rabbi Yitzchak Meir of Gur, reprimanded him for not waking early to study. The young Yehudah Aryeh absorbed the rebuke in silence. A friend who knew the real reason asked him: "Why didn't you explain to your grandfather why you awoke late?"

"What!" said the young Yehudah Aryeh. "And miss the opportunity to hear my grandfather reprimand me?" At a that young age, Yehudah Aryeh understood the profound wisdom brought down from King Solomon, who repeatedly stresses that the wise actively pursue building character while fools avoid it. Our character is like water to a plant. Abundant attention to personal traits promotes growth of character, just as water promotes the growth of a plant. Yehudah Aryeh realized that he could easily have justified getting up later, and perhaps might have even received commendation from his grandfather for his diligence. He knew, however, that while praise may be pleasant, it is not as conducive to growth as reprimand is, even though the latter may be unpleasant.

The truth is out there, somewhere at the end of a string. Now if I can only figure out a way to find my Tzitzis without stuttering...
Posted by Dnoll at 21:02
Email ThisBlogThis!Share to TwitterShare to FacebookShare to Pinterest
Newer Post Older Post Home