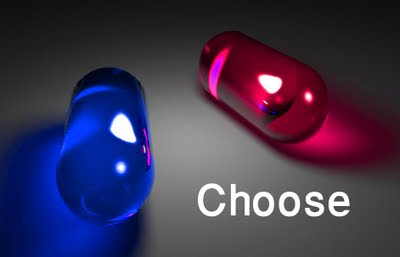 A lot of stuff has been going on in the world, but since it hasn’t been much of a pretty-picture (to-say-the-least), I have an unrelated and extremely trivial question for you. Do you know where the word ‘blog’ came from? Well, I didn’t, but I looked it up and it turns out to be a squished version of ‘web log,’ becoming ‘blog.’ You know, I think I learned that once, a long time ago, but I guess I just forgot it. That, my friends, was my segue into this week’s subject: Why is the buzz in buzzwords light-years away from reality anyways? The problem, it seems, is that some of these ‘buzzwords’ out there now-a-days take on a meaning-of-their-own and then, regardless of whether we know what they mean or not, we use them until we are blue-in-the-face; um... maybe just to sound like we’ve been-around-the-block once-or-twice.

Honestly, it reminds me of the clicky school-yard, where you had to be part of the ‘in-crowd’ or you were ‘a-nobody.’ I remember, back-in-the-day, that I tried everything to try and be part of this group or that one; but, in-the-end, I remained a-nobody to them. It didn’t matter that I surfed, made art, goofed around in the hardest classes, or did various other self-destructive, attention-getting types of things (that, incidentally, my-lips-are-sealed about here). All that mattered, at-the-time, was that I was not part of the in-crowd, the too-cool-for-school crowd; I wasn’t even part of a chick-click, sick-shtick, fickle-pickle, or a closed-circle-quad-triangle crowd. I wasn’t a sosh (short for socialite), a prep, a dead-ender, a surf-rat, a brainiac, a river-rat, a disco-dog, a dead-head, a drama-goon, a frat-fallout, an art-geek, or even a misfit. Today, I can say, quite happily as a matter of fact, that I felt like a-nobody when it came to groups and crowds, in-or-out...

Speaking of clicks, tracks, and dead-endo’s, I once asked the sales guys-and-girls at the office to supply me with ‘industry-buzzwords’ in order to apply more usable keywords, niche-words, and keyword-phrases for the company’s website. I never heard back; so, I had to invent them myself. You would think that this wouldn’t work so well, since I am a desk-jockey now, not talking-the-talk and walking-the-walk around the world anymore, but I came up with a plan that ‘did’ seem to work. I ‘invented’ the words and the phrases myself! “Wait,” you are all saying... “That doesn’t work, does it? If you invent the words, then you are the only one using them, right?” Ha Ha! That-is-the-ticket, that-is-the-trick; you see, somebody has to invent the words in the first place! So, what do you think happened? Yes, while checking the stats and analyzing the analytics for the website, I noticed that the major players in the industry, from-around-the-world, started to adapt the words that ‘I invented’ as their keywords on their websites, presumably in order to use the-most-up-to-date, industry-standard-buzzwords!

As you can imagine, there is a lot of whining-and-crying about ‘just’ this kind of situation. I mean, how many times have you heard the word, “solution” attached to some kind of technophileac-market-speak-rambling? What has ended up happening is that, starting from way back in the 1990s, we have created lists of industry-standard buzzwords and buzzword-phrases that the regular people, the ones that are just nodding their heads in agreement right now (me included), are completely ignorant of the original meanings; words like: affluenza, agflation, amakudari, and arbitrageur; word phrases like: alligator-spread, accounting-noise, alphabet-broker, aunt-Millie, automatic-execution, and asset-stripper... and those are just some of the ‘A’ words and phrases. I could go on for hundreds of pages with buzzwords and phrases like: bagel-land, beating-the-gun, big-uglies, Bo-Dereks, bracket-creep, bone-yarding, and boomernomics... yes, they all mean something very specific and that was only some of the ‘B’s to-boot!

I’m not even going to get started on the ‘C’s (yet), but speaking-of-which, in this week’s parsha, Masay (Numbers 33-36), we learn about another buzzword phrase: “the-C-word.” What is the actual ‘C’ word? Well, of course the parsha doesn’t use the actual ‘C’ word, since ‘C’ is not a Hebrew letter, (it uses a ‘נ’ [nun – (sounds like ‘nuin’) word])... oh, you know what I mean. The Hebrew word is ‘nader’ and it means the same as the dreaded ‘C’ word, which is ‘commitment...’ and that is why we don’t actually spell-it-out — it is common-knowledge that it would be really bad-karma to do so... I mean, heaven-forbid if we were really pinned-down-on-something, with little-to-no-wiggle-room! We would find ourselves between-a-rock-and-a-hard-place in-no-time-flat! In Hebrew we often say, “bli-nader,” which means, “without-commitment.” I guess the idea is that commitments are not taken-with-a-grain-of-salt and if one were to be made, it should be kept or cross-your-heart-and-hope-to-die, stick-a-needle-in-your-eye... It’s a pretty important lesson-in-life and, come-to-think-of-it, can mean-the-difference in a marriage, with children, and anything relating at all to social, financial, and spiritual values, on-high-and-down-low.

I think, for now, we have topped-off our friendly-little-game of buzzword-bingo. My blog exit-strategy is really going to be a fallout-spiral here, going all-the-way back-through-time, via-the-Torah, and all-the-way to the ‘Joseph-effect,’ (quantified by the ‘Hurst component’ and the Hirsch-commentary of course), which is the idea that: “movements in a time series tend to be part of larger trends and cycles more often than they (appear-to-be) completely random.” What does that mean, you may ask? It means that whether we’re UV-specter-nightclubbing or blind-barfly-backstroking (whether we understand it or not), there is a greater-purpose, a hidden-pattern, and an underlying-knowledge to everything-in-the-Universe; bli-nader...

P.S., Thank-you Investopedia for all the good-buzz.

P.S.S., From a tiny country in the center of the Middle East, many blessings go out to the massive amount of traumatized people from the senseless hatred that has recently afflicted the Norwegian People and people around the world...