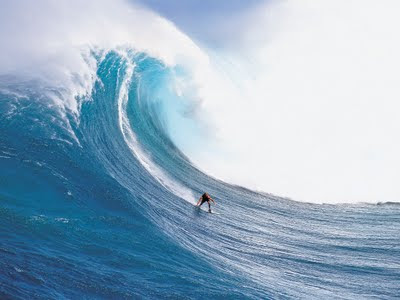 Life seems, sometimes, to be manifesting a friggin war... on so many levels. Analogously, it’s getting to the point that skipping rocks in the sea of life is close to impossible. I mean, to skip a rock the ‘right’ way, you need to have perfect glass conditions. Nowadays, the sea of life looks like the surface of Venus, having been green-housed into highly pressurized toxic methane heat storms, swarming across the surface of our collective consciousness. Think about it; when you throw a rock, intending it to glide and, hence, skip across the surface of the sea, it makes all kinds of little calamitous catastrophes every time it contacts the water. The ripples from the rock expand out and the more skips, the more ripples there are. The more ripples, the less glass. The less glass, the more confused we all get, and the more desperate we all get for a breath of fresh air, without all the hot methane ineptitude of our perceived realities!

As a kid, when I would paddle out on my custom shaped yellow pinstripe gun of a surfboard at my local’s only spot, Rock Pile in Laguna Beach, California, the best days were the ones with off-shore winds — Santa Ana conditions... These winds would shoot across the surface of the water, flattening the ripples and hollowing out the waves as they broke in peeling, long swells that would jack up over the sharp volcanic rock reefs. As the wind would hug the surface of the water and shoot off the top of the wave’s crest, it would carry a fine, sharp salty mist with it, spraying the sky with an impending cacophonous silence. In that moment, when the spray would strike your face, like a hydro powered rock saw, you were one with the sea. You knew that the next moment was going to be a thrilling ride of adrenaline and connection to the Universe... or a crushing defeat, as the water pounded your being into jellyfish soup on the rocks and sand, under the waves at the bottom of the sea — but it was worth it — it was real life.

This is where we live, in a constant state of flux between the serene glass and its metamorphosis into intersecting ripples, great and small. We know from last week’s blog (sorry it was so….. long!) that Eastern philosophy aspires to living in a world made of smooth glass, but this means that we cannot skip a rock or even drop in, sliding down the surface of a perfect wave. We can never take a chance that we might not make it or that we might stir the glass into a sea of ripples. Where ‘we’ live is a place that requires action in the world. Each and every one of us needs to make choices, whether to make a personally inspired ripple, whether to wait it out for that perfect glass, or whether to collectively work together, all of humanity, and try to control the direction, size, and duration of those elusively contrived waves and ripples, mastering our world.

This week we mourned the beginning of the destruction of both Holy Temples in Jerusalem. On the 17th of the month of Tammuz (Monday night to Tuesday night this week), great tragedies have befallen the world, causing waves of suffering to wash up onto the shores of existence. The Israelites lost the first tablets, the ones that were formed from solid sapphire by God, because they made the Golden Calf. The daily sacrifice stopped on this day as well, due to the difficulty of obtaining animals in the (at the time) besieged city of Jerusalem. The Romans breached the walls of Jerusalem on the 17th of Tammuz. A Torah was burnt by a Roman captain named Apustmus. And an idol was placed inside the Holy Temple on this same day...

All of these things seem like they have nothing to do with the world, just the Jewish people, but these are the events that left craters regurgitating across all of humanities skipping pond. These are the events that launched the Diaspora, ultimately sending the Jews into exile around the planet. This was one giant wipe-out that buried the world under miles of hardened ash and refuse, pummeling us ‘all’ further into the jagged rocks. You see, it all started because we refused to work together, each and every one of us. It all started because we wanted to do it our own way. It all started, you see, because we pulled back from God as an entire species, beginning with each individual, spreading to the separate races amongst Humanity, and driving a wedge between ‘us’ and the Creator. We didn’t even see it coming. We didn’t see that we had made the same calamitous mistake many times before, even once upon a time… in the Garden.

Reading a commentary (http://www.aish.com/tp/i/btl/48960096.html) on this week’s parsha, Matot (Numbers 30:2-32:42), I learned a really simple analogy that explains what we keep doing to ourselves. It explained that a rabbi by the name of Elchanan Wasserman stated that there is an obvious reason that some of the world's greatest thinkers and philosophers have been unable to acknowledge the existence of God: “Just as a home testifies to a builder, so does the world, which is far more complex and sophisticated, testify to a Creator. Nevertheless, many great minds have not recognized this self-evident argument, for the simple reason that accepting it would require them to change their lifestyle. Belief in a sophisticated God, who imposes guidelines for proper conduct, prevents people from living according to their desires. Therefore, in order to carry out the heart's desires, people can conjure up outrageous philosophies to justify that lifestyle.”

OK, a little too Jewish for you? Well, I found this list of common management misconceptions and surprises for new managers in my weekly Mind Tools email that could help. These guys at Mind Tools use theories in group dynamics, combined with business models to create easy to follow guidelines for things like managing people and career excellence. This particular list, if translated properly, also solves the world’s problems. It goes like this:

1. You can't run everything in detail = step back and take a look at the big picture once in a while.

2. Giving orders is costly = telling someone to do something is as good as trading them for something else, you just don’t know what or when.

3. It's hard to know what's really going on = we have a limited perception in every case and actually seeing the big picture is, basically, impossible, but try anyways.

4. You're always sending a message = everything you say and do, whether you are alone or not, is being recorded for playback in this life and in the next...

5. You aren't the boss = if you think you are the boss, regardless of your ‘position,’ you are starting at the very bottom of the corporate ladder of ‘your’ life.

6. Pleasing shareholders is not always the goal = ‘much’ better is to give it away, rather than to try and take it with you.

7. You're still only human = always know that this statement is saying a lot and just about nothing at all, at exactly the same time.

Essentially, as the Human Race, we are all ‘one’ species. A step further in: we are all ‘one’ individual, each completely different. A step further out from the Human Race, we are all ‘One’ with Hashem. On a spiritual level, we each have a role to play individually, collectively as a member of the Human Race, and ultimately in ‘the big picture’ with Hashem as the collective ‘One.’ Anything we do in life is going to create ripples, but we can manage those ripples and send them in the right directions — if we work together. Any way we break it out, in the end, with regards to our conduct in this life, we are responsible for these three things: one’s self, one’s community, and while dropping in, down the glassy face of that set-wave of life, seeking to be ‘One’ with the Universe and reaching out to the Creator...