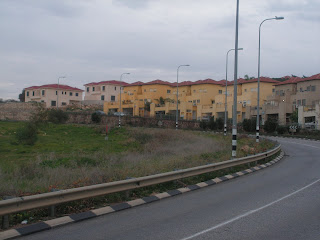 We are still doing well in Zichron. The second to last orange house on the left in this picture is where we live now. Adele has been very busy working for the army and developing her private practice. I have been looking for work and doing bids on jobs. I have finished two projects thus far, a shtender for the Shule, and a vanity for a beach house. I update the website occasionally if you would like to see. http://www.bigsundesign.com/ Both projects I was able to build in my little garage, however, I now realize that to make anything larger I will need to get a more appropriate space to work from. This understanding and the fact that none of the bids that I did came in accelerated my search for employment and also my stress because I cant make very much money by getting a job as a carpenter.

Through a friend of my sister in law Debbie, I was able to get an interview at the German gas mask factory in Zichron as a carpenter. This is the same factory that is nestled into the valley outside my living room window (you can see it in a previous photo from my merpesit). I needed to push my way into an interview because I am evidently over qualified for the job. At the interview, there were 2 people waiting in the hall to interview and one inside already. I sat down with my resume and portfolio in between these guys as it was the only chair available. No one said a word. The other guys were about 30 years old. One had long dread locks and the other had frosted spiky hair. We sat for about 10 minutes while the guy inside was interviewed. When he was done the guy with the dread locks went in. We waited for another ten minutes and another guy showed up. He was wearing a little white kippah like you get at weddings and had a Versace t-shirt on. He sat down. No one talked. The dread lock guy came out and the frosted hair guy went in. 3 or 4 minutes later frosted hair came out and wedding kippah guy said that he needed to go into the interview next because his wife was having twins at that very moment. I said "bavakasha, ain baya" and then waited for another 10 minutes.

When it was finally my turn, I went into the little room and was greeted by an Israeli and a very neatly dressed German guy with a big smile. So, long story short, I didn’t need to even open my portfolio because it was too fancy, they liked that I was an Oley Hadash, I interviewed with them in Hebrew and in English, waited over the weekend, called on Sunday to be sure they knew I was interested, and this morning I received a call that I got the job! Yay! So now, I won't need to get another car that I can't afford because I can walk 5 or 10 minutes to work! The people are nice there too! I was worried about having to work with mostly Arabs, Russian immigrants, and Ethiopian immigrants. That is usually a pretty rough crowd here in HaAretz. So, I will be working in a factory with state of the art German machinery, five minutes from my home! Did I mention that they are Christian? Well, maybe more like Amish. They all live as simply as they can. They wear simple button up shirts, dress slacks, and live like Mennonites or Amish or, I don’t know yet. They drive cars and use electricity but their philosophy is very specific about living. I don’t actually know much now but I will learn about it. They want to make Israel beautiful so that Jews make Aliyah… I think. I am extremely exited to get busy with something. I will go through a three month period as a new employee and then (with the help of Hashem) I will get to be permanent and receive some kind of insurance or something. It is all new to me.

On a down note, Adele seems to have really hurt her knee. She went to some weird dancing thing to check it out and this woman fell on her and Adele popped her knee. She went to the hospital this morning with her sister Kate. I don’t know yet what is happening with it, but I think that it will be ok. Maybe rest for a week and pain and a brace for 3 months. The worst case scenario is surgery. Oyy… I am sure she will be writing all about it some time soon. Zach will be having a little party at our house on Thursday night this week. I think we are supposed to lock ourselves in our room or leave the house. I remember when my parents did that for me and my little brother. We rolled up the rug and had a dance party in the living room while they sat in the car at the end of the street. It sounds weird but I guess it is a bit normal or maybe normal just for me. Josh now has a rabbit. He is making some friends but it is a bit tougher for him. Good thing he has some time before he needs to get his act together. Zach has only one year to get his Hebrew down enough to take his baccalaureates in Hebrew. These are tests that determine your collage placement. They start here in 11th grade and every year the kids take them. They average the scores or something like that. I don’t actually know. I think he will do OK. He is already getting A's on some tests and says that he understands most of what is going on in the class. We have to have lots of faith to do this. I have been using this faith for a long time now and feel that sometimes I have had to use it to hold my family up. Just last week I hit rock bottom. My faith started to falter a bit. I started to think about what if we moved back? What if I can't find work? What if we can't make it here? It felt very lonely in that place. Getting this job was a G-D send for me. I needed to remember that all things that happen have their purpose. I needed to be down to know what it was to be up… or… something like that anyway. I hope that all is wonderful for everyone and please write me sometime. I would enjoy hearing from you all.
Love from the Holy Land,Drew.
Posted by Dnoll at 15:57
Email ThisBlogThis!Share to TwitterShare to FacebookShare to Pinterest
Newer Post Older Post Home