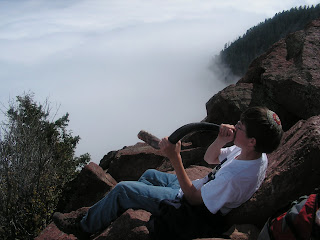 We have had an amazing year here in Israel. We have visited many places where amazing things have occurred throughout history. We have begun to adjust to the many differences in culture and lifestyle (we still have miles… I mean kilometers to go!). And that is really what this time of the year is all about, anyways… to take stock of who we are, who we have been for the last year, and how do we want to be written in the book of life for the year to come. It is said that everything is decided for the year to come before we even begin to live it. Well if that is the case then I hope that everyone has the best year to come as is heavenly possible!

Ok, now that the official stuff is done… I went to the green line today. This is an artificially placed border which roughly defines the 1967 border of Israel and what is called the stachime (West Bank Territories) I went with my boss and some of the Germans from work to move some chairs for a Techus (ceremonial gathering) that they will be having at a new factory that they built next to Jenin. You know; the one in the news with all the terrorists... well if you listen to CNN you will hear about all the poor Palestinian children and Jimmy Carter. Anyways, that is another story. We got the job done and my boss showed me around a bit. We picked up a Russian guy in Pardes Hanna on the way so I got to sit in the middle of the front seat with this guy on my right and my boss on the left. On the way back we stopped to drop some extra wood in an Arab village. (Arabs are the primary workforce to build buildings in Israel and used to be employed in many areas, until the Intifada started again that is, now it is mostly Asian workers that send money home to there families abroad) we drove into this little village and the whole place was littered with garbage and rusty stuff. We passed grizzled old guys with kafias and cigarettes and Arab woman with full head coverings with there children in tow. It was a small village so we didn’t need to go far until we were instructed to back into a little barbwire wrapped dirt road and slowly inch up the hill to the top. We stopped and jumped out of the truck and began to unload.

There was only dirt, cracked stucco and rusty metal buildings, and the ever present garbage that was strewn about by the wind, which is why I was so surprised when I looked up and saw this beautiful structure standing about 30 meters away on the top of the central hill that the village was built on. Everything around it seemed to descend from this place. In its environment, it was actually shining, like it was the Taj Mahal or something. I quickly unloaded the wood with the help of some of the locals and then noticed someone yelling in Arabic in our direction. I looked up and on the prominently placed mirpesset (balcony) an Arab was standing casually leaning over the edge and shouting orders. This wasn’t any normal looking Arab guy though. He had some kind of headdress on, had a long black beard, and fiery light colored eyes. This guy was scary looking. He looked like a Taliban warlord and must have been the chief of the town or maybe he just had all the towns’ money, who knows.

We made it back ok and only got into a little argument in the truck. The Russian guy was a bit of a Leftist. My boss, the German, is a bit of a Rightist. And me, sitting in the middle of the cab of the truck and also somewhere in the middle politically (maybe just on the fence) started to talk about the Arab situation in Israel. I was mostly just trying to keep up with the Hebrew but it was sure interesting.

So, to finish off the year the right way…

May you all be written in the book of life for the year to come with health, wealth, and the wisdom to use them both for only dvarim tovim (good things), Baruch Hashem!