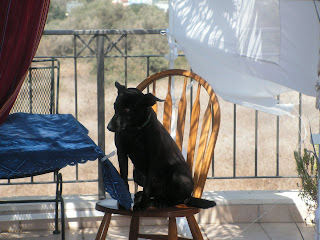 Sukkot in Israel is a very different thing than in the States. In the States, we make a Sukka, usually… but only if we are involved with Judaism on a marginally deeper level. There are many ideas about Sukkot and why we are supposed to build one and live in it for seven days, but the most convincing argument comes directly from The Big Guy. He doesn’t say anything about the Arbaim Menim (Four Species), Palm, Citroen, Myrtle, and Willow, but he does say that we need to dwell in the Sukka for seven days. I think we add another day for Simchat Torah because the holiday is actually 8 days long. Before the Holiday begins, right on the heels of Yom Kippur (the very religious actually start as soon as the fast is over) we start to build the Sukka and this leaves us very little time to get it done and livable. There are kids dragging the Skach (branches and leaves for the roof) around all over the place and funny little carts selling it in the Religious neighborhoods. The trees are trimmed all over the country and the branches are left for everyone to collect. Almost everyone builds a Sukka, Religious, Secular, Conservative and Reform and there are Sukku’s all over the place and in the strangest places. There are very specific rules about how it should be built but a lot of room for many variations like small little low ceiling ones for sleeping in and giant party ones built in front of restaurants and hotels.

I walked through the ultra religious neighborhood of Mea Sharim (100 Gates) in Jerusalem on the first day of Sukkot and it was absolutely incredible to see all the little nooks and crannies with these funny little huts built on them. They were on the roofs and built on little meter size merpesets (balconies). They were hanging off the sides of buildings with makeshift Robinson Crusoe stilts holding them up. We also have a few of this caliber in the neighborhood here in Zichron in which I study at the Yeshiva sometimes. Simply Amazing… G-D commanded us to build a little play fort, and to dwell in it. It is like when we were kids and our parents told us to “Go out and Play”! That is exactly what Sukkot is, a whole week of playing. And that is how our Sukkot holiday started. We invited friends two nights in a row and had wonderful dinner parties (thanks to my wonderful wife Adele for such hard work to do this). We moved right into the work week with more parties until Adele and Josh went back to Jerusalem to attend a party at her Brothers house and Zach and I stayed home. Well, what is this leading up too you ask? And what is the deal with the picture above you ask? Now you’re getting the idea… Dude, the dog, wanted to have some fun in the Sukka also. He got a little carried away with his impromptu decorating though. He must have felt that the cloth walls were just a little too claustrophobic and to the best of his ability (you know, dogs lack opposing thumbs so they have to use teeth) and in a very artistically expressionistic style he removed only the bottom half of two and a half walls. He was so proud of himself when I got home from work. He was strutting right through where there used to be walls with only a slight hop over the remaining metal frame… Oy.

So, we had planed to have a few more little parties with friends but I just couldn’t get behind it after the remodel. (If you didn’t get invited this year this is our official excuse, and… sorry, next year for sure.) Today is the last day of Sukkot and I have another half day off of work for Simchat Torah. This is the celebration of the Torah! Tomorrow I am off work too! The kids have been off of school for two weeks now. I think that they only went to school for two weeks between summer and Rosh Hashanah. Wow, it will be good for them to get back to work on there little futures… Hope everyone had a great holiday season this year,

Love to you all,
Noll’s of Zichron.
(By the way, I found out what Noll means in Hebrew… Weaving Loom, interesting haw?)
Posted by Dnoll at 16:06
Email ThisBlogThis!Share to TwitterShare to FacebookShare to Pinterest

Strangers in a Stranger Land 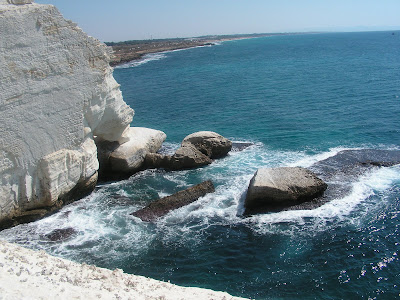 Even though I am beginning to understand a bit of Hebrew, know what to do in some situations, and am starting to expect certain things from our new life here in HaAretz, I still think of myself as an utter stranger here. On the inside I feel more at home then any other place I have been in on the planet but I suspect that I will always feel like a stranger to some extent in this amazing and crazy land. I have also noticed however, that when I take a moment to really look at the people around me, that everyone else also seems to be a stranger in some indefinable way to there environments. Even the Sabras (born Israelis) seem a little like they are strangers. Now that is a strange word for born Israelis… Sabra. It comes from a cactus plant that is indigenous to Mexico in Northern America. The idea behind this unusual choice of names is that a Sabra is prickly on the outside and soft on the inside. The analogy sure fits, but what about the origination of the plant? I would think they would have picked a plant something like the amazing black iris (iris shakum) that I saw on one of our hikes in the Negev Desert that only blooms for about a month a year and is an endangered species because it really only lives in a tiny little section of the dessert. Or even better, the amazing little red flower (forgot its name) that grows in Israel that, when sectioned and looked at under a microscope, it has the exact shape of a Magan David (Star of David). There are sabra cactus plants here all over the place, even in the shukes (open air markets) where they are de-prickled and served with fresh fruit and watermelons. But that is really beside the point. What I am getting at is that this Country was created out of not only the ashes of a more ancient Country and culture, but that it was created out of the ashes of humanity as well. That is a heavy thing to think about, however it can be looked at from a literal perspective (the Holocaust), or from a more esoteric perspective.

The people that live here in Israel are from almost every culture on Earth. There is a kibbutz called Ofir (means fawn) of East Indian Jews not far from Zichron, where the people sometimes can be seen in Sari’s, like from Hodu (India). There are Chinese Jews, Korean Jews, Russians (some Jewish and some not by the standards of The Rabbinate in Israel), Jews from North America, and Jews from South America like the guy I met in Jerusalem that was from Peru that looked like a native Indian from the mountains (that was an interesting story) or our new friends, Olim (new imagrants) from Mexico City, Mexico. There are people from all over the world, Africa (both white and black), Asia, Australia, Europe, and don’t forget the Middle East. Israel is a tiny little speck on the map of the Middle East and most of the Arab countries threw their Jews out when Israel became a nation in 1948 and many of them ended up here too. There are major differences between Iraqi Jews and Moroccan Jews, between Yemenite Jews and Jerusalem born Jews, between Ethiopian Jews and other Jews from North Africa. I believe that Israel is the new melting pot. It is a place where cultural and religious differences are common. It is a place where Notzrim (Christians), Muzlimim (Muslims), Yehudim (Jews), Dattiim (religious), Chilonim (Secular), Druzim, and Bahaim, all live together, for better or worse. Israel is a place where all the amazing and varied peoples of the Earth coexist (maybe that isn’t the exact word…) but, if you look at the economics of the region as a whole, thrives as well.


The place I live, in my heart and in my soul, physically emotionally and spiritually, is a place that so many people share; people from all over the world and also from right next door. We all seem to be looking for balance and meaning in our lives. We are all opinionated and sometimes rude and obnoxious, however when it really counts, we are there for each other. It is like living on the cutting edge of the knife of humanity. The world is there, in all its amazing glory, and we all exist together as we ride through the universe in time and space like tiny molecules, seeking form and function, seeking meaning and understanding. Israel is the edge of that reality for me and for most of the millions of people that are here with me, sharing this voluptuously cosmic ride, to the ends of our beliefs, and then, (Baruch Hashem), beyond.
Posted by Dnoll at 19:44
Email ThisBlogThis!Share to TwitterShare to FacebookShare to Pinterest
Newer Posts Older Posts Home
Subscribe to: Posts (Atom)