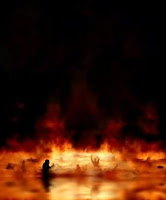 Did you ever want to know if Hell is exothermic (gives off heat) or endothermic (absorbs heat)?

First, let’s just assume that there is a Hell and that Hell is bound by the finite quality of time but not of space. This being the case, we need to know how the spiritual mass of Hell is changing within time. So, we need to know the rate at which souls are moving into Hell and the rate at which they are leaving. To do this, we need to analyze the world’s religions. To start with, since Atheism is technically a religion and agnostics are technically considered to be on the path to acquiring religion, we have to assume that there are no truly secular people and that all people are religious enough to be a member of a religion.

With this in mind, the vast majority of religions in the world believe that once a soul gets to Hell, it will not leave. Therefore, according to most religions, no souls are leaving Hell. There is only one tiny religion in the world that says that every soul will only stay in Hell for an appropriate period of time before leaving Hell and going to Heaven.

Furthermore, most religions in the world state that if you are not a member of their religion, you will go to Hell and only one religion, the same tiny one from above, says that every soul, from every religion, is welcome in Heaven but, every soul first goes to Hell in order to clean it up and make it presentable for when it arrives in Heaven. Since there is more than one religion in the world and since people do not belong to more than one religion, and since the only religion that says every soul goes to Heaven also says that every soul first goes to Hell, we can project that all souls go to Hell. With this understanding and with birth and death rates increasing exponentially as they are, we can expect the number of souls in Hell to increase exponentially as well.

If we apply Boyle's Law to this problem it would state that in order for the temperature and pressure in Hell to stay the same, the volume of Hell has to expand proportionately as souls are added.
This gives two possibilities:

1. If Hell is expanding at a slower rate than the rate at which souls enter Hell then the temperature and pressure in Hell will increase until—all Hell breaks loose.

2. If Hell is expanding at a rate faster than the increase of souls in Hell, then the temperature and pressure will drop until—Hell freezes over.

So, is Hell exothermic or endothermic? Let’s consider that last night in my house, without going into all the gruesome details, all Hell broke loose. That would mean that Hell must be exothermic. On the other hand, since Hell breaking loose in my house eventually ebbs and turns into stony silence, it would appear that Hell can freeze over, which means that Hell is also endothermic.

So, which is it then?

I know, I know—if I am not careful I might just end up slipping on thin ice and sliding right out of the pan and into the fire!
Posted by Dnoll at 18:48
Email ThisBlogThis!Share to TwitterShare to FacebookShare to Pinterest
Newer Post Older Post Home