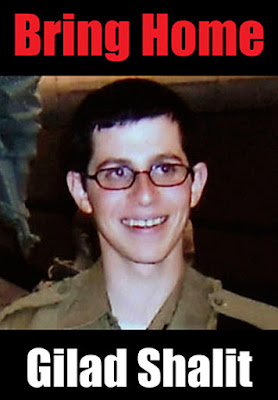 I had a dream the other night that Gilad Shalit was released from terrorist captivity and not a soul even knew about it. Do you know who Gilad is? Well, if you don’t live in Israel, it is quite possible that you don’t, considering the weight the Western Media puts on pro-Hamas-Palestinian / anti-Israel-Semitism propaganda. About 5 years ago, just to fill in any gaps, two weeks after I moved halfway around the planet to start my life again for the third time, the Second Lebanon War broke out. It started when an ambush from the Palestinian terrorist organization that controls Gaza, Hamas, and a virtually simultaneous ambush from the Palestinian terrorist organization, Hezbollah, who control the Lebanese border, captured Israelis, including Gilad, by crossing the border into Israel. He is still believed to be alive, but we don’t know how well he is doing, since he has been refused any medical care from any outside institution. What I ‘do’ know is that as long as I have lived in Israel, he has lived somewhere in a prison cell, buried under the ground, in a terrorist war zone for the crime of being a Jew in his homeland.

I remember when the war broke out. We all quickly tuned into the news and since all the local news was in Hebrew, we found ourselves watching CNN. The more we watched, the more our jaws dropped... Not because of the shock of the war, about a two hour drive away, but from the horrifying one-sidedness of the reporting. Virtually every story from CNN that was told about the conflict depicted Israel as not only the aggressor and the oppressor that started the war in the first place, but that it was doing so with all-out abandon. So, we tuned to Fox News, which being a longtime Democrat that lived in Boulder, Colorado 15 years prior to my move to Israel, I wouldn’t have believed it in a million years. They actually reported from a fairly nonbiased platform… just reported the news and let us make up our minds what was really going on. I still cringe at anything bearing the Fox News emblem and this is precisely the problem that I want to delve into today — selective listening.

I guess, after 5 years in Israel, I have pretty much gotten used to the news that is reported around the world about Israel getting twisted from every media source you can imagine. When it comes to the world reporting on Israel, the Right shifts to the Center, the Center shifts to the Left, and the Left shifts to Extremism, which is why I believe that when dealing with Israel, the Left and Muslim Extremists fit quite nicely together, but I am getting ahead of myself.

In my dream about Gilad and the overwhelming sense that the Media had gone quite insane, my subconscious, dreaming mind seemed to be saying that the knowledge of the release of Gilad needed to be kept a secret. We weren’t instructed, but we all knew not to say anything about it from the fear of international reprisals from the World Media Army. Yes, there seems to be such a thing in the world. The Media controls so much of what and how we think, whatever side of the spectrum we tend to align with.

I remember when I was about to move to Israel and a friend of mine from graduate school asked me if I was going to be ‘one of those Settlers.’ I had to explain a little history and geography to him in order to come to a mutually agreed upon ‘peace of a distant proximity.’ Then during the war, while ducking Hezbollah missiles, I began sending out emails to try and give people an on the ground perspective. He sent me a reply to one of my emails stating that he had worked really hard, for many years, cultivating the kinds of media information he was willing to even receive into his general vicinity. This, I realized, was another way of saying that he would only listen to what he wanted to hear, that’s it. He had effectively put blinders up to shield himself from a version of the truth that didn’t align with his own world view…

The media coverage during the latest ‘Nakba’ conflict earlier this week was no different. Did you know that Nakba means catastrophe in Arabic? That makes sense if you think about it. The Muslim world view, as written in the Muslim holy book, the Quran, incorporates the idea that, eventually, the whole world will be under one rule, the Caliphate — a Muslim Empire. The entire world will be forced, one way or another, to bow to the Caliphate or die. So, how does one react when he (not necessarily she) sees his world view crumbling? I mean, the Muslim Empire is supposed to expand throughout the ages with only minor fluctuations on the borders, not be inflicted by the recoil from having a gaping hole, however small, smack in the center, obnoxiously removed. It sounds like a catastrophe on an individual and a collective level to me. I can’t imagine what I would feel like if, for my entire life, I had been brainwashed into thinking one specific way, only to have it dashed in front of my eyes. Definitely a catastrophe — or maybe it would be an opportunity to grow and see the truth in the world? Naw… I must be reading into it now, I guess…

Syria (or I should say the Dictator of Syria, Bashar al-Assad ) has given its indignant disapproval of the death by the IDF (Israel ‘Defense’ Force) of mad border runners, among hundreds, that claimed to be Palestinian, right before being secretly transported by the Syrian Government by bus to the border, sneaking across the border, running into a wall of warnings, and finally running into a bullet. Maybe it had something to do with the 801 ‘known’ civil protesters that Assad had slaughtered just a week or two ago... hmmm.

Here is a news headline from an admittedly ‘right’ leaning news outlet (Israel National News), dealing with the Nakba conflicts, that particularly grabbed my attention: “According to unofficial reports, six Arabs were killed in clashes with Israeli forces on the Lebanese border Sunday. Four others were killed in an incident on the Syrian border, and one in Gaza, as Arabs protested the consequences of their failure to annihilate Israel in 1948.“

Now here is a quote from CNN that appears at first glance to be trying to report in a ‘fair and unbiased’ way about the recent conflict: “The conflicts broke out on "Nakba Day." Nakba — Arabic for "catastrophe" — marks the period when more than 700,000 Arabs were displaced from their homes during fighting that followed the creation of Israel in 1948.”

So, the truth seems to be somewhere in-between all of this unseen soapbox preaching. When the Israel National News says, “… the consequences of their failure to annihilate Israel in 1948,” it is the truth, but bent for the reader’s perception of events. This is why most people that consider themselves ‘right wing’ are so incensed that others can’t see the obvious truth. The version of events that they hear is bent just for them. In the CNN piece, when they explain Nakba, “… when more than 700,000 Arabs were displaced from their homes during fighting that followed the creation of Israel in 1948,” this is also the truth, but clearly lays the blame at the foot of an oppressor army. The real truth is much more complicated and involves a majority segment of Arabs fleeing at the request of the surrounding Arab nations, not fleeing from violence. It doesn’t even mention the Arabs that stayed in Israel (a newly sanctioned country by the United Nations) and are still living in Israel today, even serving in the government. Where did the number they gave come from anyway?

And last, the recent terror attack in Tel Aviv is called “suspected” in the left leaning paper. We know and have on record, that as the Israeli Arab truck driver ploughed into cars and pedestrians, he was shouting, “Allah Akbar” and “Death to the Jews!” This is how we can see that we are ‘all’ brainwashed by the different factions out there; with pieces of truth mixed in with a ridiculous amount of opinion that is stated as truth and as fact.

In this week’s parsha, Bechukotai (Leviticus 26:3-27:34), we learn about keeping the commandments and in doing so, receiving blessings from Hashem. Rashi states that the greatest blessing is one of peace, which is referred to in this parsha: “And I will give peace in the Land and you will lie down and no one will make you tremble; and I will rid every evil beast out of the Land; neither shall a sword pass through your Land."

With the overwhelming and irrational condemnation of Israel in the media, I have to wonder why the Israeli government even cares what the world thinks. All Israel really has to do, based on what God said directly to the Nation of Israel, is to follow the commandments. It seems obvious to me that Israel can’t win trying to play the political game; just look how the United Nations ‘Peace’ Keeping Forces looked the other way when the recognized international borders of the modern nation of Israel were breeched by unruly mobs seeking death and chaos. And look at how the World Media Army reacted…

I think Nakba must be an acronym in English for a kind of catastrophe. Look at it this way: N = No or none whatsoever, A = Attempt or effort, K = Knowledge of history, the present, and any future potential, B = Bigger, as in ever-expanding if unchecked, A = Ails, ills, sickness, pain, death, and ultimately nothingness!

Without making any effort to learn from who we are, our history as a race of Human Beings on our planet, our history of conflicts and resolutions, our historical and cultural prerogatives, and our intellectual / spiritual foundations, the collective woe and distress that we experience as a species will grow at an ever expanding rate, until one day we may wake up to find that we, and the world, no longer exist… catastrophe…

I believe, my friends, that ultimately this is the reason that we have not attained peace in the world, much less peace in the Middle East — it is not that the latest round of proximity-talks failed or that certain over developed egos flared. It is not from building on the other side of an imaginary ‘green’ line in the desert or even a war of subjectivity in the Media. So, what is peace, pray tell? Peace is the opposite of evil. I think Isaiah the Prophet said it best when he stated the following: "He (God) fashioned light and He (God) created darkness; He (God) fashioned peace and He (God) made evil." (Isaiah 45:7). There is a cosmic system at play here and the sooner we start to pay attention to the writing on the wall, the sooner the lion will lay down with the lamb… so to speak.

May Gilad Shalit and his family have peace soon with his speedy return and on this Shabbat, may you and your family enjoy peace as well. Or in other words: Shabbat Shalom!!!
Posted by Dnoll at 18:33
Email ThisBlogThis!Share to TwitterShare to FacebookShare to Pinterest
Newer Post Older Post Home