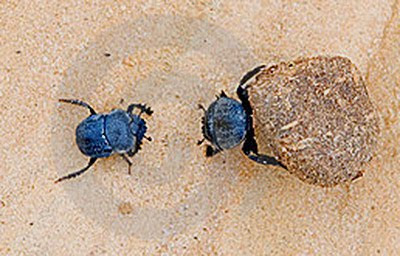 “Lenny!” said Stanley, “What was that rumble?”

“Um,” answered Lenny, “I think it must have been another one of those unexplained phenomenon...s. Phenomenon has an ‘S’ at the end, doesn’t it?”

“Lenny! Nu, watch what you’re doing! Hey! Look out! The treasure is rolling by itself! Catch it!”

“Stanley, you are such a nudge... Why can’t you just let things be? You know, there are things in the world that can’t be explained; things like the ball of hot god-light and the dark cold sniffers, things like the water upside down and the village-people in the sky.”

“OK, OK... I felt it that time too. Quick, get under the front of the treasure and I will stay at the back. We can stay like this for awhile, but don’t move! Yeah, like that. And Stanley, try to stay out of the brightness from the ball of hot god-light.”

Meanwhile, 20 minutes have gone by in the world of the biggies. Stanley and Lenny are still motionless, hiding under their ball of dung, thinking that the biggies don’t see them.

“Yup, good call Lenny. I think the coast is clear. Let me just try and flip around to support the treasure with my hind appendage thingies. You know? I just gotta say, Rosalie is gonna love this when we get it back to the hole in the ground! Look how round it is, just sitting there, waiting to become a play-fort or a soup-kitchen or whatever! I just think this is great! We are gonna be rich too! Did you see how many more treasure balls there were up there?!”

“Wait a second Stanley... You think ‘Rosalie’ is going to be happy? You should see the look on your face! I think that you, Stanley, are the one that is going to be happy... not Rosalie! Why are you still trying to pin your feelings on others Stanley? Don’t you remember what we worked out in therapy?

“Listen to the little treasure hunter,” chided Stanley, “all big and macho, telling me how to be, even bringing up that good-for-nothing ‘therapy’ thing again... I’ll have you know that I was rolling treasure balls around for practice when you were still a pimple on the mind of your progenitor’s excrement cavity!”

“Stanley! Look out!! It’s something else this time! It’s bigger too! Look out... Stanley!”

Meanwhile, the park ranger had driven his biggie truck up the winding dirt road, which had been traveled upon for centuries, and was almost finished emptying the daily collection of throwaways. With a screech and a crunch, the truck ground on by all the bushes and weeds that the cows hadn’t eaten yet and the gravel and dirt shot this way and that. It was almost Shabbat and the park was closing soon. He didn’t celebrate Shabbat, since he was from a different faith, but his whole world operated from the concept of a 6 day week and 1 day off. The ranger waved at a nice couple sitting on a bench. “I really love this spot too,” thought the park ranger. “Those folks really know how to live.” The park ranger emptied the cans and bottles into their respective containers and then drove off down the dirt road. The gravel shot out, this way and that, and it was quiet once again.

The view was pristine and the old couple enjoyed the silence, while they looked out over the hills of Samaria through the ancient olive grove. Shabbat was coming, so they decided to get going, walking hand-in-hand, up the hill to the abode that they referred to as home. Really, if you ask the layer above, home was really the connection that lay between them. Home was really just a feeling, an intuition, and home was more real than any house could ever be.

“Did you sense that?” said Metatron, but Gavriel wasn’t paying attention...

“Lenny… What are you talking about?” said Stanley, “You live in a fantasy world. There is just unexplained phenomenon in the real world, not fantastical inventions of your subconscious mind and want-ta-be realities based on the layers of air between your brain cells … Someday we will possess the knowledge and the equipment to understand it all, but now we just have to be ‘OK to not know.’ Based on that, we know that nothing that we have not explained actually exists at all! Whatever our most brilliant, scientific thinkers tell us… that is what I am going to believe.”

“But Stanley, I understand the brilliant part, but what about the scientific part? Doesn’t science ultimately rely on faith anyways? I mean, just like they used to say that the world was only a hole surrounded by the vast unknown, science is based on what you believe as well. And anyways, if our faith was only based on what ‘they’ tell us, we would still think that the world was a hole surrounded by the vast unknown — we would never have found the treasure balls that ‘you’ so dearly love!”

“Did you hear that?” said the old woman, as she walked slowly up the hill, hand in hand with her husband. “I heard something small down there. Watch where you are stepping; I don’t think we are alone.”

The old man looked down at his feet, looked up into the wide blue sky, and then looked into the glistening familiarity of his wife’s round eyes. He smiled an old worn and wrinkled smile, knowing that his connection with her was deeper than he could ever fathom. “Life is an amazing thing,” he said, and winked at her. “Let me tell you about what I learned about the parsha of the week, Behar (Leviticus 25:1-26:2). You see, it is all about trust and faith. The Ramban begins to explain it like this: ‘The process of creation is a deep mystery not to be understood from the verses. It cannot truly be known, except through the tradition going back to Moses, our teacher, who received it from the mouth of the Almighty. As well, those who know it are also obligated to conceal it.’”

“What this seems to mean to me is that we need to trust or have faith in God in order to, ultimately, understand, on a deep level, what we are doing here in the first place. Faith is how we have the ability to grow ourselves, our souls. We can have faith in all sorts of things, things like assuming we will be able to walk up this hill again, for example. It is a bit complicated, but it can also be traced back through biology, astronomy, geology, language, and on and on… all the way to even anatomy’s 248 bones that we have inside our bodies, which represent the 248 positive commandments for us to accomplish while in this world of action. On a side note, observing Shabbat is an extremely powerful act in this world and doing it properly is worth all of the 248 positive commandments put together.”

“Another way to understand this is based on writings from the Rebbe. Basically he stated that: ‘The scientist's understanding begins from the outside and attempts to work in — from the bottom up. He begins with subjective empiricism and attempts to deduce an objective model. The wisdom of Torah begins from the inside and works its way out — from the top down. In this approach you meditate upon the Creator's own objective model and apply it to discover the truth behind this world.’ The Rebbe then adds, ‘The prudent scientist will realize that he can benefit most through a combination of both approaches.’”

“Honey,” said the old man’s wife, “I am happy that you are reaching out to the Creator, but I already understand all that ‘faith’ stuff, without all of the analysis...”

“I love you too Sweetie.”