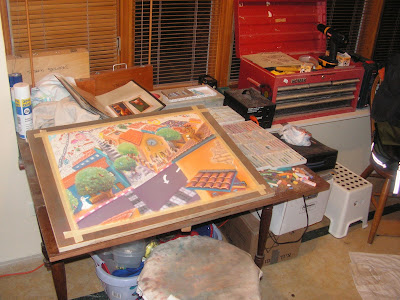 Going back a ways, all the way back to my hacksaw wielding confrontation in the driveway, I learned a thing or two about the possibility of spending the night in jail… It had been brewing for years, it seems, when I finally had had enough of it. Remember one of the last blog-posts I wrote, the one where I took off my kippah? Well, Hashem sent me another message (loud and clear) to put it back on. It happened, realizing after the fact, since I had been behaving like a baboon, all knuckle dragging and swanking around…  Was I really behaving like a baboon…? oy.

I slapped my kippah back on my head the next day, fortunately after waking up in my own bed and not the local Israeli stockade for juvenile baboons in disguise. The other guy said that I tried to cut him with a sharp metal tool of some sort; well, I did have a hacksaw in my hand when he so eloquently barreled down the driveway at me. I even raised it in the air as my arms went up in a failed attempt to get him to slow down and let me pass. You see, I had just finished cutting off the end of a down –spout from my brand new rain gutters, so that he would stop bending it over and cinching it off with a pair of pliers. Yeah, I was pissed, but mostly, at the time, I just didn’t want to get run over.

We both called the cops, but he must have had his phone on speed dial, since they were already on the way when I, with my broken cultural-language attempt, got through to them. He filed a complaint; I just let it ride, realizing that this was meant to be. I already knew that I had dropped back into chaos for a moment, as my kippah rested on my dresser-drawers upstairs in my bedroom. It went racing through my mind, while the cop pulled me aside and said to wait, that to walk more than 4 amot without a kippah (according to Rav Moshe Feinstein, 53.98 centimeters each), I had been really pushing it, cashing in on Hashem’s good will for the better part of a week… so I let it ride to see where it would go.

Well, now that a bit of time has gone by, I see where it is all going… go figure. I’m making art again. I’m ripping out drawings like they had been stopped up behind a dam of self-satisfaction for far too long; six years too long. The light is glowing in my newly vamped dining room turned studio… the light is flooding out into the Universe, right back to God. Yikes… what was I thinking? Painting the kitchen cabinets with a cosmic journey mural just wasn’t enough, I guess. I’m making art again! That, as you probably figured from the lack of blog-posts heading your way, is why I haven’t been writing so much. I’m making art again!!!

Since I gotta get busy now with a drawing called, “Pray,” about my local town, Zikhron Yaaqov, Israel, I’m going to conclude with this:

Live like every day could be your last. It’s simple. That’s it. Everything else is commentary…

Oh, and the hacksaw in the driveway incident? We are still working it out, one day at a time…