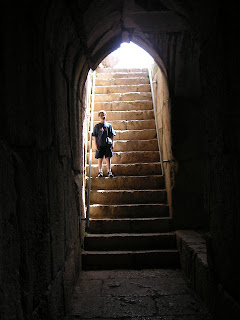 (the 9th of the month of Av on the Jewish calendar)

Sometime before I was born, a tree began to grow, somewhere in the Carolinas in North America (Hi Aunt Cathy!). It was a Carolina Pine Tree and it grew for, maybe, 50 years before it was cut down for lumber. It had a journey through giant saws and then to a kiln to dry it properly. It went on a ship and maybe made a few stops in Europe before it finally landed on the shores of Israel. Once it was offloaded, it probably sat in a shipping yard for a week, or maybe a month, and then went to a local lumberyard, maybe in Haifa. Then, as it worked out, it finally found its way to an agalah (cart) in the basement maksan (storage area) at Beit El in Zichron Yaacov where my Son Zach, was busily working at his summer job (at the Nagaria (woodshop) with me!).

Well, to really tell this story right I guess I need to back up to about the time of Moses. He is the guy that led the Israelites out of Mitzraim (Egypt) and the story goes like this… at the border of Israel, after hearing the horrible tales from the spies that were sent in to get information about the land that G-D had promised to give to the Jews, the Israelites decided to flee. They turned from G-D and forgot all the miracles that He had done for them. After this moment of complete idiocy, G-D told the Israelites that not only would they have to wonder in the Sinai Desert for forty years, but that throughout time, the 9th of the month of Av, would be a day for the Jews to cry. Now that is really heavy. And to make matters worse, maybe a little history can also shed some light on that ill-fated promise;

The first temple in Jerusalem was destroyed on Tisha B’Av.
410 years later, the second temple was also destroyed on Tisha B’Av.
On Tisha B'Av in the year 1290, Edward I issued an edict of expulsion for the Jews from England.
The expulsion of the Jews from Spain during the Spanish inquisition took place on Tisha B’Av, 1492.
In 1914, WW1 (the parent of WW2) broke out on Tisha B’Av.
The final solution to wipe out all the Jews by the Nazis was signed on, OK, not Tisha B’Av, but the eighth of Av (I guess the Nazis were a little bit eager) however,
The first cattle car which left the largest ghetto in Warsaw, loaded with Jewish Men, Woman, and Children heading to their deaths, left on Tish B’Av, 1941.

There are more dates with more horrible reasons for Jews to cry but I just don’t want to think about it all. It is just too overwhelming. Well, that is probably why, on Tisha B’Av, 2007, in the basement maksan at the Beit El factory in Zichron Yaacov, Israel, I was busy treating the day just like any other day, even though in the back of my mind, there was something lurking, something dark and dangerous, something that I had pushed as far back as I could get it. And the further I pushed it, the further the fate of the day was willing to reveal its ugly head.

I walked by Zach, who was at the time trying with all his might to lift these giant beams of Carolina Pine into a space that was designed for perfectly straight boards, and not the twisty, warped, and splintery boards that were sitting on the Agala in front of him. He had been sweating for about ½ of an hour before he asked for help with one, very innocent and unpresuming board. I reached down and began to move the board in his direction, but at the last moment, noticed a sharp pain, like a needle being inserted under my fingernail. I quickly withdrew my hand, muffled a few curses, walked swiftly to the back door for some air, had to sit down before I got there, and then, I guess I passed out from the pain because when I opened my eyes, there were people running around me, trying to figure out what was happening. My Boss, Yochonan was there. I remember speaking in slurred Hebrew and then I remember getting up and walking to the bathroom to wash the wound. I had to sit down again and eventually I had to lie back down on the concrete floor and briefly lost consciousness again. Ay Yaey Yaey! They made me lay down on a little cot in the hall for an hour and nursed my wound with some dressings. It wasn’t that big of a deal, not too much blood or anything. It was just a sliver, half way up under my ring finger nail and a quick pry to drive the day home for me.

I eventually was able to continue working that day and tried not to be too embarrassed as I passed people in the halls. I only passed out, twice, from a splinter… OK, OK…I know; big things in small packages. Maybe next time I will see it coming.