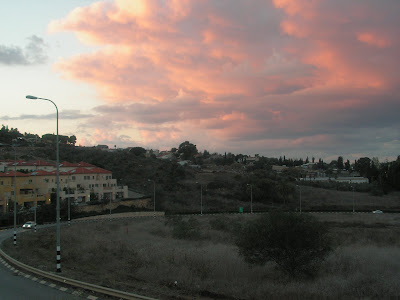 When I woke up the morning of my wife Adele’s return from her first journey chutz la’Arets (out of Israel) since we moved here, the house had just been cleaned by May, the Pilipino woman that Adele had arranged three weeks before, Shabbat dinner was planned, and I had time before driving to the namal ta’ufa (airport) to shop for the week and then get dinner started, or so I thought. The morning started just as any other Friday morning had. I quickly grabbed the load of laundry that was still left, headed downstairs and shoved it all into the mechona hakvisa (washing machine). Then, I started looking for my cellphone…

After I waited while the ridiculous washing machine (see Adele’s letter for further information on that one at - http://adventureoodle.blogspot.com/2007/08/european-clothes-washers-and-tears.html ) to drain so that I could open the locked door and rip the clothes out, I found it… in the bottom of the washer. Its light was still on in a desperate attempt, it seemed, to live. It didn’t. I quickly took it apart, dried it off, put it in a plastic bag, and drove to Hadera to get it fixed. Now, as luck would have it, I have a new cellphone and I also have a new case that goes on my belt so that it will never go into my pocket again. But that left me with one hour to go shopping and get dinner done… priorities, priorities…

I got the shopping done on the way home from Hadera, I prepared some of the dinner and had Zach help with the rest while Josh and I drove to pick up Adele. Yehe’ea beseder… or, maybe it wont be OK… you see, when Josh and I were walking out of the house to get to the car we needed to pass through my little basement studio. As we passed, I noticed that something wasn’t right. I looked closer and there was a big mess on the floor. There were clamps scattered around. I scanned the direction of the origin of the strewn clamps and noticed my $1,000 aluminum frame full suspension mountain bike, buried and yes, bent. Because I was late and now swirling in a pool of adrenalin driven angst, I just left the mess for later. We got to the airport in record time with just enough time to buy a little lady bug balloon for Adele. Well, I was probably not thinking about the drive much and thank G-D for the little airplane on all the road signs to direct me considering my limited ability for concise thought at the time. Josh later said that he was afraid to go with me at first because of the intensity of my emotions (get it under control Aba…) but we both used the opportunity to practice our stress management skills… breath deep… blow it all out… breath deep… blow it all out. 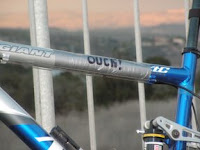 Don’t worry; the story isn’t over yet… Adele had been stressing out since before she left about the new mountain bike she was bringing in to the country. We had heard horror stories of appliances, technological gadgets and gizmos, and yes, bicycles becoming the focus of the tax collectors at the border to the Holy Land. Long story short, we paid, through the nose in money and in time. We waited for about two hours and Adele had to go back the next day with her sister Kate for five more hours to get the bike released… Oy.

On the good side, dinner was great, we got the beautiful new pink mountain bike for Adele, I got a new blue cover for my phone (that will never see the inside of my kies (pocket), and after a few days of worrying about how to fix or sell the bike and what to ride in the meantime, I duct-taped the damage in classic Israeli fashion, and while taking a picture of it for this blog saw the most amazing sunset (see above) from the street in front of our house! Ye’heey beseder! Now I just hope I don’t break the bike completely while bouncing down the boulders around here… Neereh,