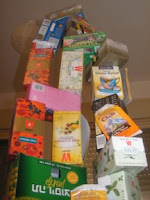 My wife Adele has been out of Israel for only one week of a planned three week visit to the States. Even though we already miss her, early on all four boys in her household were ecstatic about the new found freedoms. Well, maybe the dog wasn’t so thrilled. Dude the dog had an unfortunate experience with nerves and missing his Mommy when about two days into this so-called freedom of the household he decided to change his poop schedule. He usually had a daily bowel movement on my late-night walk with him, but no… he wanted to go right in the middle of a really good movie and a cold beer! I, conveniently, didn’t heed his rather obvious warnings of impending doom and continued to watch the movie with the boys. Just being able to do this without the nagging insistence on playing with the toy of the day should have been warning enough for me of what was to come. To make a long and unpleasant story short; when it was bed time and I took him for his walk, he didn’t go poop like he normally did. Then, from down the street I heard Josh crying and running up the hill barefoot. “Dude crapped in my room! I can’t go to sleep in there, it smells!”

So, I was bummed and so was Josh. Dude isn’t allowed upstairs in our house, like many Israeli households, and he must have just been trying to find a place outside of his normal terrain. OK, my fault, I know!!! We finished up with the unneeded walk and went to clean the mess. We walked up the stairs and yup, it did smell bad. Luckily it was on the carpet and all we had to do was carry the rug outside and to then squirt it in the morning. We ran some fans and cleared up the stink in no time, or so we thought. With Josh tucked into bed, and Zach off to one of his ‘all night-er’ shvita (school strike if you remember from a few blogs ago) parties, I decided to hit the sack as well, you know work in the morning and everything. So, I walked into my room and low and behold, the stench had returned. Dude was in real trouble now. He had also gone in my bathroom on the throw rug and just to drive his point home he left me a nice neatly stacked pile on top of my bed, right in the middle…. oy. (Good thing I am the bed-maker in the house) The next day Zach informed me that Dude had initiated his room as well. in the morning, when Zach had returned he also noticed the smell and, oy va voy, in the middle of the floor on the tippi top of the giant pile of mixed up folded and dirty clothes, Dude the dog had made his statement, just like a cherry on the top of a very long night.

The rest of the week went great for everyone, until the food that I had bought earlier in the week (you know the usual cheese, beer, cucumbers, pita and humus) ran out. That is a good way to clean the fridge because on Yom Reviyi (Wednesday) it was completely empty. I had planned on taking the day off of work on Yom Hamishi (Thursday) to celebrate my birthday and maybe do something like go to the desert for a mountain bike ride. Instead, I shopped, cooked, and cleaned. (Hence the picture above of all the amazing varieties of tea that I found stuffed in the cabinet cracks while cleaning) so now we have Cholent, Spaghetti, Lasagna, vegetables in the fridge, and plenty of tea! Yay! And just in time for the shvita to end too. Yup, that is what I heard, maybe on Yom Rishon (Sunday). That would really be a wonderful thing, even now that we have a fridge full of ready made food to eat for the kids during the day. You never can tell. Things really happen here when they want to. We really learn to let go of the reigns that we think we have and let Hashem take over.

For instance, instead of going riding by myself on Yom Hamishi, I went on a fun bike ride today with my friends Bruce and Andreas. We went to a Christian Monastery called Mukraka where Eliyahu HaNavi (Elysiah the Prophet) had created a sacrificial fire alongside of one from the Philistines that were praying to a Baal (Idol) of some sort. The two Prophets had a sacrifice- off and in the end, Eliyahu won (of course) and killed the Baal Prophet by a river that we could see down in the valley far below. We then rode on to Daliat HaCarmel (a Druze village) and back. It was fun!

Tonight, we are having Cabalat Shabbat (receiving the Shabbat) at friends and tomorrow we are going to more friends for Suda Shniya (second meal) we are being well taken care of… what did you all expect, we live in a country full to the brim with Jewish Mothers! But it will be great, though, to have our very own Jewish Mother back in Gan Eden with us; be safe Adele.