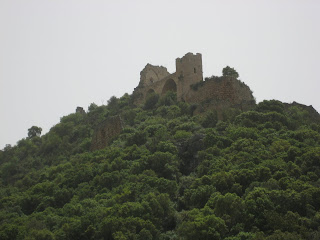 This is a story that starts about six months ago, when Adele and I decided that it was very important for us to become observant as Jews (Orthodox for those of you that need a translation). It wasn’t an easy decision and I spent some time looking out over Har Ha Ba’it (The Temple Mount) with tears of both pain and joy finding there way to the backs of my hands as I wiped them away. Some of the stories since have been chronicled in this pulp of both darkness and light, mazal and i.p. addresses, and adventures both in reality and in the mind, but today was a new day, or at least it started that way.

To begin this process of recounting footsteps and feelings, I need to back up to last week when Adele came home from Jerusalem after an evidently, particularly grueling descent (or assent as the case may be) into the land and headspace of datti-land (religious-land). She has a packed schedule in J-Town and all of her clients are the kind of Jews that you think of when you think ‘Orthodox Jew’ you know, Rabbi’s and Rebitzins, Teachers and only the deepest of thinkers and scholars. Well, Adele is a deep thinker too, but as you may already know, she has her own way of thinking deeply as well. Sometimes, I guess, it can become just overwhelming for her, as when she returned, she had become a very thoughtful, albeit a bit schizophrenic, version of Cru’ella De’vil. We fought, sort of made up, fought, sort of made up again, and then it was the fast of Ester (Ta’anit Ester) on Thursday that I mentioned in the last blog.

I was nervous about it as I had never fasted while at work before and didn’t really know what to expect. In the end, my fasting experience was really amazing. I had been learning the Purim Migillah (story of Purim) through an amazing little book by a Rabbi called The Malbim, which extrapolated the story of Purim into a novel like form with politics, character embellishment, and historical contextualization as well. As the fast day progressed, I really started to feel my soul lift into a realm of light and space. My physical self at first protested, but then fell into a mutual knowing that this was a time for the soul to play. By the time I got home from work and came up with a really funny costume to wear to the Purim party we were attending, I was really flying. And that is where the story goes astray, and I mean in a chaotic kind of Purim way.

OK sorry, I need to back up a little more. You see, I have a few friends and family that seem to feel like I am the type of guy that can just become fanatical and this being the case; I am going to don a black hat and move to Svat, leaving them behind for ever. A couple of these friends have actually had this experience with close friends and I guess it was fairly traumatic for them. Well, to be truthful, I guess there is probably some truth to the fanatical thing with me, but in all fairness, the only fanatical deal that really ever stuck was ‘trying’ to be an artist so… I understand their feelings and actually it is a real compliment for me to think that they all care about me so much that they want to keep me around… but this is all a side track, you see, this particular struggle has been the most difficult battle for me and I don’t think it is really over yet. So, back to the costume party; I decided to really show them all that I was really just being me and decided that for my costume, I would, you guessed it, don a black hat and then hang a sign around my neck that said, “Svat or Bust.” I thought it was really hilarious… in the end, Adele and I fought, some of my friends said that is what I would look like in a year or two, and to top it all off, Adele said that, “I should know that people dress up as alter egos and are really just trying to express their inner selves.” I guess I should have just gone as Batman.

Sound Chaotic? Well, the story doesn’t end there. Sunday morning I went on a tee’oul (trip) with my work to the North. We saw the Crusader castles at Acco and Monte’fior, and rode the cable cars down to the sea caves and grottoes at Rosh Ha’nikra on the border of Lebanon. This is where the Hagganah destroyed the train tunnel that the British were going to use to continue to supply weapons to the Arabs right before the War of Independence (sound familiar to you Americans out there?). We then had a picnic where the Germans supplied kosher food to the workers that were treated to this amazing tee’oul and then, full and tired, we headed for home.

Well, right before all this sightseeing and the amazing historical and political depth that is everywhere I look in Israel, I got a call from my wife about an irate neighbor yelling about his car or something. Evidently, Josh and his little cousin had an altercation with this guy the day before. You see, we live in a really upscale town, but on the wrong side of the tracks. We have cheap rent, just as long as we aren’t using the ever devaluing Dollar, but this has its down side as well. This guy drives too fast and thinks that kids shouldn’t play in the street. (Including his own kids which I reminded him of later) We are very clear that the kids need to be very careful and usually they are however this time, it was a near miss. Joshes cousin was sitting on the skateboard and hard to see from the driver’s seat of a car, especially for someone that doesn’t seem to feel like he needs to be looking for playing children. Josh, while not pulling over for the speeding driver as he went by in the first place, had told this guy to slow down because it was Shabbat and there are kids playing in the street (I.E. Joshes story after the fact), and I guess this guy heard only the part about how it was Shabbat and assumed that Josh was telling him that he shouldn’t be driving on Shabbat. He then called Josh a ben’zona (I am not translating this one) and then told his cousin that he should get a slap after backing up recklessly and just about running him over. Josh made an explicit hand gesture (as he, unfortunately, is sometimes known to do under situations of duress), and then the guy called him a ben’zona too and said that he would slap him as well. I didn’t hear any of this until after the tee’ule so all I knew that morning while sitting in the bus in the parking lot was that Josh had written, you guessed it, ben’zona on the windshield of the guys car with wood glue and that the guy was going to call the police or something. Just so you all know, when I got in the guys face about it all, he acted every bit the child that he seemed to be when interacting with the kids the day before and all the kids being safe (Thank G-D) it all seems to come back to a very sad phenomenon here in Israel that I have officially dubbed with this blog, Datti-a-Phobia (scared of the religious). Come on, what is the deal here? What are these guys afraid that the religious people are going to kung-fu them in there sleep with a Lulav and an Etrog?

In the end, Josh paid to Have this guy’s car cleaned, I watched my neighbor sink into his inner (arse) child as he tried to talk with me as an adult after behaving so poorly, the kids learned a valuable lesson, and I got to tell you all about it and process my so-called black hat fanaticism as well. I even got to put in a blurb about the Beit El tee’ule and just for the record, Adele and I actually made up for real this time! Well, she did just leave for J-Town again so we will just have to wait and see what the prevailing winds drag in this time.