Dreaming of Ladders and the Folding of Space Time 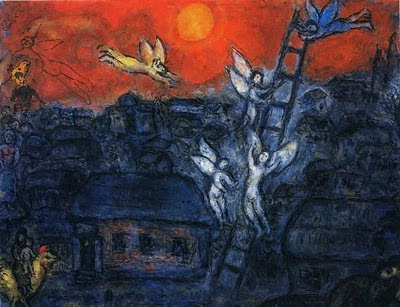 Did you ever have the experience of dreaming such a vivid dream that it was absolutely real, like your dream life was the real life while the life that you enjoyed when in a conscious state was only a vague and distant feeling, like a dream inside your dream? I have. I once had a dream that I drove my car backwards over a cliff. As I fell, looking up at the beams of my headlights that were bouncing off of the slowly receding cliff-top, I was absolutely aware that I was falling into the sea. I fell for a long time, as if time began to slow down, and then my life flashed before my eyes. I saw my family and friends and all my close relationships as they paraded across my ‘conscious’ mind. I was going to die and I knew it. When the moment of my death arrived, time came to a complete stop; I opened my eyes and realized it was all only a dream. I had this strange feeling, though, that lasted for a few minutes. I wasn’t quite sure which state was the dream and which was reality.

In this week’s parsha, Vayeitzei, Jacob has a dream. It is no ordinary dream, as we find out in the narrative, but what is so interesting to me about it is that it spans multiple dimensions. Here, let me explain: First, we can get the easy part with the spiritual world and the physical world. Jacob is dreaming of a ladder going from this world to the next that has angels climbing it. Something I read in the commentary of my handy pocket Chumash got me thinking about the other dimensions. I have always loved that dream story, but never really knew that when the Chumash says, ‘Upon which you are lying,’ it really means lying on the entire land of Canaan. It goes on to explain that Hashem folded the entire country under Jacob, so that, in effect, he was lying on all of the Land (Chullin 91b). Essentially, Jacob was in more than one place at the same time, which brings to mind amazing things like teleportation, time travel, and even black-holes, wormholes, and the folding of space time!

Yeah... still only a theoretical concept, the folding of space time and wormholes, however, do continue to bolster healthy debate and discussion in the scientific community. The noted astrophysicist Stephen Hawking once gave a lecture in which he stated that, “If you can travel from one side of the galaxy, to the other, in a week or two you could go back through another wormhole and arrive back before you set out.” So, theoretically speaking of course, we could not only go back in time, but we could teleport from one location to the next in no time at all. If we could do the same thing multiple times, we could, in fact, exist in multiple places at the same exact time. Are you following me? The bottom line is that when you put it in the proper context, what Stephen Hawking is saying is that it took a few thousand years for science to catch up to what the Rabbis have know all along (and Stephen is an Atheist too!)

OK, OK... getting back to my dream… when I died in my dream and in ‘reality’ woke up, I was straddling dimensions of a sort. Just a moment before I awoke, I knew, without any doubt, that I was going to crash into the waves at the bottom of the cliff and die. I even had the ‘mandatory – lifetime flashing before your eyes scenario,’ but then I woke up. The Rabbis tell us that this is a perfect example of how we know that the ‘reality’ that we live in is really just an illusion. The ‘real’ world is the one we wake up to, after we are finished ‘slumbering’ our lives away. This, at least to me, is a great way to understand life. If I can be so sure that I am alive and living, and then wake up to find that I was only dreaming, I am pretty sure that this ‘reality’ is only temporary.

In case you are thinking, ‘What a bunch of bull*&#%,’ most people don’t know that time travel has actually already been demonstrated. Scientists who studied passengers on the space shuttle proved that, because of the shuttle’s high speed, time moved more slowly for those on board. But..., ‘How does it work?’ you may be asking. Let’s put it this way. If you were a two dimensional being living in a two dimensional world, like a dot on a piece of paper bumping around on one plane, and the god of the piece-of-paper world folded the piece of paper in two, what would happen to you? You would end up right next to the dot-guy from the opposite side of the piece-of-paper world. That would be a dimensional jump through space and time. What that is doing is introducing the third and fourth dimensions to the second dimension. We happen to live in the third dimension, so in order to do the same thing in our spongy little world, we need to introduce the fourth (time) and fifth (let’s just call it La-la Land) dimensions. Simply put, masses (think black-holes) that put pressure on different parts of the universe eventually come together to form tunnels or wormholes and making what the Rabbis explained centuries ago, a cup of morning coffee as we put the real world behind us and continue to kid ourselves that we understand anything about the nature of the Universe.

Are we awake yet?