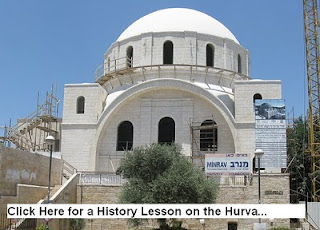 With all of the hubbub about peace talks or proximity talks (or whatever), illegal building in Jerusalem, and the rededication of the Hurva Synagogue in the Old City of Jerusalem, I thought I would throw in my two cents (or agarote as may be the case) on the issues. The way I understand it, these are the core issues for peace talks relating to the modern Holy Land:

1. Security for Israel
2. The Status of Jerusalem
3. The Fate of Palestinian Refugees
4. The Boundaries of a Future Palestinian State

Of course, a Palestinian Arab would reverse the order of these issues so, as a Palestinian Jew, I will address them in that order as well…

4. The Boundaries of a Future Palestinian State

This comes up in the news all of the time. The issue is that the Israelis (Palestinian Jews) are building settlements on the land of a future Palestinian (Palestinian Arab) state. This will prevent the Palestinian Arabs from having a contiguous state or even a state at all. The argument is that if the potential Palestinian Arab state becomes too small, it will not be viable as a state.

First we need to look at the actual borders of the land called Palestine. When the British named it after they carved up the Middle East with the rest of the European Colonialists, they took the name from the Roman Conquerors from 2000 years earlier when the Romans, in order to conceal their shame and anger with the Jewish rebels, tried to erase the Israelites, Samaria, and Judea, off the map by using the term ‘Palestine.’ Thousands of years later, Arab settlers moved in accompanying various Arab empires from around the Middle East and eventually (in 1948 at the founding of the state of Israel) adopted the name of the ancient Mediterranean tribe, the Philistines, which in Hebrew means ‘Invaders,’ to portray themselves as indigenous.

The same land that the Romans included in their designation ‘Palestine’ included all of modern Israel and Jordan. It was called by the British, Trans-Jordan. This was the ancient homeland of the Israelites with a little strip of land along the coast that was the ancient homeland of the now extinct culture and people of the Philistines. The British then drew arbitrary lines in the desert sand and called one piece Jordan and one piece Palestine (the future Jewish state). The whole area (Trans-Jordan) was filled with people that basically considered themselves Palestinians because of the name the Romans gave the region that they lived in—some were Jewish, some were Druze, some were Arab, some were Christian, some were Bedouin, and some others were there as well. Essentially the majority of the Muslims ended up in Jordan and the mixed multitudes that remained ended up in what the founders of the modern Jewish State called Israel.

When this happened in 1948, the Arab countries that surrounded Israel (whose borders were also designated by the same European colonial powers) didn’t like it at all. They attacked and what remained when the dust settled was what we see now on the map. Gaza, Samaria, Judea, and the Golan Heights, all fell into Arab hands. They went about destroying any remaining Jewish or Christian remnants, just like when the Israelis evacuated Gaza recently, and the Gazan Arabs destroyed all the infrastructure essential for a viable economy and populated, or polluted (Hamas) as the case may be, the land.

In another series of self-defensive wars, Israel won back the territory that they had lost, including the Holiest site in Judaism, the Temple Mount, and East Jerusalem including the ancient grave yard on the Mount of Olives where my father-in-law is burried. Any other country on Earth would be rightly entitled to the land that they shed blood over in a defensive war, but now we have a new people on the planet called the Palestinians! Um… am I missing something?

All I have to say about this is—don’t we already have a Palestinian State in the Middle East that is made up of 70% to 80% of self proclaimed Palestinians, a country that has been associated as Palestine for 2000 years, a country that the British colonialists called Jordan?

3. The Fate of Palestinian Refugees

OK, I am going to take it that by ‘Palestinian,’ the powers-that-be mean the Palestinian Arabs that were in the part of the land of modern Israel when Israel won it’s defensive wars and either fled, were kicked out, or stayed in Israel. For sure they couldn’t mean all so-called Palestinians because that would mean the Hashmonean-Jordanians, the Palestinian-Jordanians, the Christians throughout the region, the Druze, The Jews, and on and on… They mean a very specific group of people that (in the surrounding Arab states) have been kept in refugee camps until today. In Israel, these so-called camps have been small cities for decades. They have grown and prospered and many of the so-called refugees have become real Israeli Arabs (I know, it sounds like an oxymoron). Israel even has Israeli Arabs in its parliament.

So, how many refugees could there be anyways? Even if you were to add the kids of the kids of these refugees, it surely couldn’t be the same amount as the Jews that were forcibly ejected from almost every major Arab country in the Middle East and Africa when Israel defended itself in the 1948 (defensive) war of independence. Let’s just have all the Arab countries that violently forced the Jews to leave their borders without their valuables pay back, with interest mind you, all that they stole from the Jews and in return, the Palestinian Jews will let the so-called Palestinian refugees back in, with all of their children and their children’s kids too…

2. The Status of Jerusalem

Oy… This is going to take a book. Let’s just trim it down to how many times that Jerusalem is mentioned in the Holy Book of the Koran… 0… that’s right, 0. How many times is it mentioned in the Torah, the Holy Book of the Jews? 622 times. If you add that number and the number of times it is mentioned in the Christian Bible you get a total of 792! The Koran talks about Mecca and Medina but not about Jerusalem. The Muslim claim to Jerusalem is based on a dream that Mohamed said he had where he flew a white horse like creature to the farthest reaches of the kingdom and prayed there with all of the Prophets. Jews and Christians had been living in Jerusalem for many years before any Muslim set foot there, even in a dream of some far off land. Jerusalem was made the capital of the Jews 3000 years ago. I’d say that is good enough for me when it comes to final status talks…

Seems easy doesn’t it? If another country invades, you either fight back or surrender. What this government does this time around is anybody’s guess. That is why this is such a mute point. If we just did what G-D told us to do, we would already be at peace with the world. No Goldstone reports, no Hague accusations, no human rights abuse claims, no media whitewashing. Now we are getting into tricky territory because at what price does peace come? Keep Shabbat? Oh no! I would rather have the constant violent interactions in the news and around the world and consider it someone else’s problem! If I can just watch my TV on Shabbat and follow really closely all the idiots running the planet-wide nonsensical political extravaganza, I will be happy—and maybe one of those grape popsicles and a Maserati in my driveway too. Ya... that would be good. I would be happy then.

I will just leave you with a quote from the Jerusalem Post that I read recently that, if you read into it deeply enough, explains it all—both the Jewish perspective and the perspective of the rest of the world too.

“Pay no attention to malicious slander,” Metzger said. “All we are doing is resurrecting the Hurva, which was destroyed more than 60 years ago. We have no intention of rebuilding the temple, not this week—unless Almighty God sends it to us from the heavens.”


Shame on Ishmael’s descendants,
Shame on the descendants of Esau,
Shame on Abraham, Isaac, and Jacob’s descendants too for waiting for Hashem to do both his part and our part of the deal that we made together, so long ago...