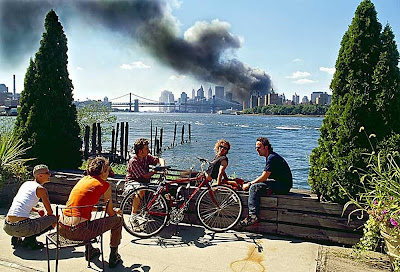 The other day, as I was praying, I looked out the sliding glass and saw one of the Arab workers, building a wall for a neighbor, across the street. We caught each other’s eye and looked briefly at one another, but right to the core. I realized, in that moment, that a whole world of ‘hidden to the naked eye’ information was flowing between us. My Tallit (prayer shawl) was up over my head with only my Tefillin (phylacteries) showing from under it. I knew that this man, this Muslim who was working across the street, saw deep into the nature of what I was attempting to do, that I was attempting to commune with the Creator of the Universe. He, after all, believes that there is ‘one’ Creator of everything too.

In the second that we locked eyes, a praying Jew in the Holy Land and an Arab construction worker somewhere in the Middle East, it reminded me of a story I heard once about how in the 1700’s, the Vilna Goan, Rabbi Eliyahu Kramer of Vilna, was accused of assisting a Christian in abandoning his faith. The story goes that the Vilna Goan just sat there in a courtroom during the entire proceeding, reading a book and saying nothing to defend himself from the accusations in the face of threats of years of imprisonment in Siberia. It wasn’t until his students tried to rally their teacher into saying something in his own defense that they all noticed his Tefillin, which had been covered by his Tallit. The Vilna Goan then pulled back his Tallit, exposing his Tefillin, and the entire courtroom began to tremble. The court members were paralyzed with fear and then immediately adjourned the court, telling the Vilna Goan that he was free to go.

In this week’s parsha, Ki Tavo (Deuteronomy 26:1-29:8), we read, "All the nations will see that God's name is called upon you and will fear you." The Talmud says that this statement refers to the Tefillin of the head, which is called the Rosh, and this line in the Torah predicts exactly what happened in that courtroom with the Vilna Gaon. What, you don’t believe me? This is actual history, not some fantastical whimsy concocted for our amusement. OK, here is another example of predicting the future from the parsha of ‘this’ week: "God will bring upon you a nation from afar as the Eagle flies. A nation that you will not understand its language, a brazen nation that will show no pity on old or young." (Deut 28:49)

Nachmanides relates that the nation mentioned here was Rome, whose symbol was the eagle, who came from afar, who spoke Latin, and was a nation that had no compassion on their subjects. What, that isn’t enough for you? How about this then: "Until the walls and fortifications that you depended on all fall down" (Deut. 28:52), which became a reality in 1967 to 1973 with the ‘Bar Lev Line.’ This ‘perceived’ line was only a ‘fairy tale of security’ that utterly fell in 24 hours during the Yom Kippur War, when it took Sadat only 24 hours to cross it. Interestingly enough, this same myth of fortitude and security was obliterated in America when the September 11th attacks occurred, which, coincidentally or not, happened ‘exactly’ 10 years ago this week.

What, still not enough? OK, now we have to get a little gruesome. In Deuteronomy 28:26, it says, "Your corpses will be food for the birds and beasts, and no one will chase them away." Roman Historian, Josephus Flavius describes this phenomenon exactly in The Jewish Wars when he writes about the cruelty of the Romans during the destruction of the Second Temple, when they left the bodies of the murdered Jews to rot in the sun, forbidding them to be buried.

Yes, there is a lot more: "And you shall be a proverb and a byword among all the nations that God will drive you there." (Deut. 28:37). This is anti-Semitism, plain and simple... Anti-Semitism is different than all other forms of discrimination, since it has lasted for thousands of years. It has absolutely no logical explanation either, not that any discrimination does. Anti-Semitism is, however, the mother of all discriminations and it is alive and well in the world today; just look at the Arab Spring flings going on around the Middle East. Last Friday’s attack on Israel's embassy in Cairo was caused by a crowd that was whipped into a frenzy by clerics attending Friday prayers, causing them to tear down the building’s security barrier and then to ransack the entire place.The personnel stationed there barely escaped with their lives.

Or… what about Iran, which had a ceremony on Monday to inaugurate the 1,000-megawatt Bushehr nuclear plant? The mullahs of Iran (same type as in Egypt that whipped the crowd into a violent frenzy) claim it will be used for peaceful purposes, but we can’t forget the statements made by their president to ‘wipe’ Israel off the map, now can we? And, I might add, in terms of anti-Semitism, this is just what we read about in the papers…

So, how does all this relate to our Moslem construction worker friend? Well, it means to him, and to the entire world, that the People of the Book, the Jews, are waking up and coming in droves back to the Holy Land, the land of their birth. It also means that the responsibility to fix the world relies solely on the righteous. What do 'I' mean? Well, there is a concept in the Talmud that relates the following:

In Ezekiel 9:4 it is written that, “God said to the angel, ‘Pass through the city, through Jerusalem, and mark the letter 'tav' on the foreheads of the people who sigh and moan over all the abominations that are done in its midst.’”

Said the Attribute of Justice (the angel Gabriel) before God, "Master of the Universe, what is the difference between these and these?"

God replied, "It is revealed and known to Me that if they had protested, the sinners would not have accepted it from them."

Justice then argued, "If it is revealed before You, is it (also) revealed to them?"

You see the dilemma here, don’t you? Well, actually there are two dilemmas; one is that an angel is questioning God in the first place and the other is, just because God knows the future, that doesn’t mean that everyone else should know it. The first dilemma I will leave to minds ‘much’ brighter than my own (something along the lines of ‘social justice’ and social ethics changing the world I think), but the second dilemma fits in nicely here. You see, God ‘did’ change his mind and He killed the righteous first. The righteous had the responsibility of at least trying to compel the others to turn to the good, but they didn’t. They sat in the comfort of the knowledge that they, personally, had made the right decisions, but what they forgot is that they, each and every one of them, also had the ability to change the world… Hey, that sounds like the first dilemma…

No matter; the world has been descending into collective apathy for an entire generation now. We fool ourselves into thinking that we ‘can’t’ make a difference. We fool ourselves into thinking that it is not ‘my’ fault that the world is the way it is. That Arab across the street understands that this is the way we are all operating and it is only a brief glimpse, a momentary connection to something deeper, that can compel him to a true understanding. When he witnessed me, the Anglo Jew, ‘trying’ to commune with the Creator, he was momentarily shocked out of his stupor, but only momentarily. I, as well, was shocked out of my self-righteousness, as we locked eyes that morning. When the moment was over, I dulled back down to my meat-like self and the Arab across the street narrowed his eyes and the spark left its momentary resting place, as he returned to making dust and noise, seemingly trying to send a shock back out to an apathetic world.