Of Cavemen, Politicians, and Regular Folk 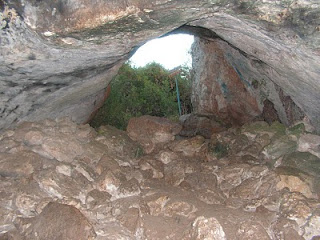 Rabbi Shimon bar Yochai was a beloved student of Rabbi Akiva. Rabbi Akiva was the spiritual guru during the Bar Kochba (Ben Kosiba) revolt in 135 CE against Rome and the only one of the four sages that entered the “Pardes,” which means Orchard in Hebrew, and came out whole, both mentally and physically. Pardes is also an acronym for Pshat (simple or plain), Remez, (hints or deep), Drash (inquire or seek), and Sod (secret or hidden), which are the four levels of Torah learning.

Rabbi Akiva passed on orally to his student, Rabbi Shimon, the Pardes of the Torah including the hidden level of Sod. Because Rabbi Shimon bar Yochai was a student of the spiritual guru of the revolt against Rome, bar Yochai was relentlessly pursued by the Romans and their politicians (it didn’t help that he hung out with Rabbi Jose and Rabbi Judah, whose parents happened to be proselytes; I need to be careful here... My ego might get offended...).

Rabbi Judah commenced the discussion by observing, "How fine are the works of the Romans! They have made streets, they have built bridges, and they have erected baths."

Rabbi Shimon bar Yochai responded, "All that they made, they made for their own benefit. They built market-places, to set harlots in them; baths, to rejuvenate themselves; and bridges to levy tolls."

Judah, the son of proselytes, spoke of the talk that they had, which eventually reached the politicians in the government. The politicians decreed: "Judah, who exalted us, shall be exalted. Jose, who was silent, shall be exiled to Sepphoris (Tzippori in Hebrew, located in the central Galilee). and Shimon, who dissented against the Roman Empire, shall be executed."

Rabbi Shimon and his son, Rabbi Elazar, hid themselves in the Bet Midrash (study hall), and Rabbi Shimon’s wife brought them bread and water to eat. When the decree became more severe... they left and hid in a cave.

A miracle occurred and a carob-tree and a wellspring of water were created for them to eat and to drink. They would remove their clothes and bury themselves up to their necks in sand and spend the whole day studying. When it was time for prayers, they came out of the sand, dressed, prayed, and then took off their clothes again and submerged into the sand once more, so that their clothes would not wear out. They spent twelve years in the cave.

Elijah the Prophet then came and stood at the entrance to the cave and proclaimed, "Who will inform the son of Yochai that the emperor is dead and his decree annulled?" So they emerged.

Seeing a man plowing and sowing, they exclaimed, "The people forsake eternal life and engage in temporal life!" and whatever Shimon and Elazar cast their eyes upon was incinerated immediately.

A heavenly echo (Bas Kol) then came forth and announced, "Have you emerged to destroy My world? Return to your cave!"

So they returned and lived like before for another twelve months and when they said, "The punishment of the wicked in Gehenom (Hell) is limited to twelve months," A Bas Kol came forth and told them to, "Go forth from your cave!"

Now wherever Rabbi Elazar harmed with his look, Rabbi Shimon healed. Rabbi Shimon said to his son, "My son! You and I are sufficient for the world."

On the eve of Shabbat, before sunset, they saw an old man holding two bundles of myrtle and running at twilight. "What are these for?" they asked him.
"They are in honor of the Sabbath," he replied.

"But, only one should suffice for you?" they asked.

The old man replied, "One is for remembering the day of Shabbat (Exodus 20:8) and one is to guard the Shabbat (Deuteronomy 5:12)."

Rabbi Shimon said to his son, "See how precious the mitzvot are to the people of Israel?" With this, their minds were put at ease.

During those years in the cave, when Rabbi Shimon studied with his son both the revealed Torah and the hidden or secret levels of Torah (Torat HaSod), also known as Kabbalah, Rabbi Shimon wrote down the material for the first time, in a book called the Zohar, meaning Splendor or Radiance. This mystical tradition was kept alive by the Ramban with his commentary on the Bible and came alive again in the sixteenth century with the Ari, Rabbi Yitzchak Luria, and their followers, in Tzfat, Palestine. Later, in the eighteenth century, Israel ben Elazar, the "Bal Shem Tov," embraced these mystical traditions again in Eastern Europe.

So, what about the bonfires on Lag baOmer? The story that I heard was when Rabbi Shimon Bar Yochai died, sometime between 170-200 CE, he was in a house, communing with G-D and the heavenly court, when the light and power of that which was revealed became so unstable in this world that the house exploded in flame. Bar Yochai died in the flames and his final teaching to his devoted students was "Now it is my desire to reveal secrets...The day will not go to its place like any other, for this entire day stands within my domain..." the domain of light—of the light of Torah! Bar Yochai handed the Zohar to his students and passed, as a Tzaddik, into the next world. The Zohar, which some also say was begun by Abraham Avinu in a book called the Sefer Yitzirah (Book of Formation), was finally published in its current form by Rabbi Moshe de Leon sometime before 1305 in Spain.

All I have to say is what a lot of work to figure this all out and, in the end, I am still confused... I guess the secret level of Torah is destined to remain secret, despite the modern craze for Kabbalah and its self-help spin-off droppings, landing in a town near you!