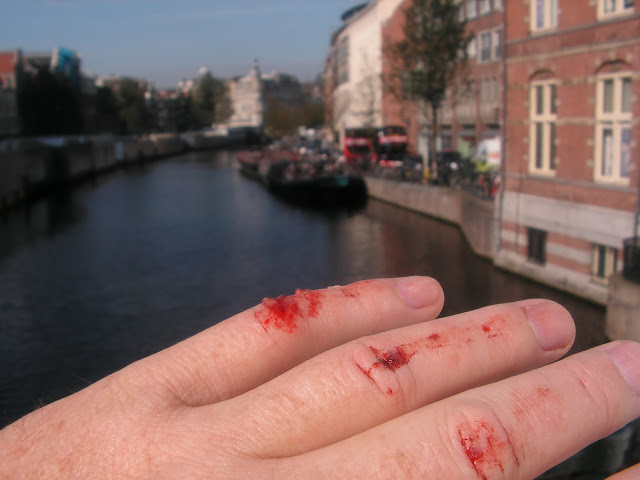 After leaving my mother’s hospital bedside last week, I traveled south to visit my dad. I hadn’t really visited him since his funeral in October of 1996. We had some trouble finding his gravesite, as a marker was never installed… I sat on a bench, after finding the location of his grave, and talked to him about his wife, my mother. You see, she had decided not to be buried in their duel plot. She wanted to be in the mountains, closer to her ‘new’ life and her ‘new’ husband. I called her on the phone from the gravesite, looking out at the green fields covered with plaques and flower pots, and asked her again what she wanted to do if she was not to make it out of the surgery that she was due to receive in a day or two. I still don’t really understand her decision.

Growing up, most of my friends, having come from broken homes, considered ‘my’ family the perfect family unit. I told my mom that she was going to have to explain her decision to Dad when she met him on the other side. I cried and apologized to my father for everything. I have no idea how everything got so twisted. Even though I always felt, while growing up, a lacking or a kind of fog that had descended upon my head, I still believed what my friends were saying. I mean, when I looked around, things for everyone else seemed ‘really’ messed up and I had nothing to complain about.

One of my best friends, for instance, was a White-Anglo-Saxon-Protestant surf rat like me and had a father that was known to wear six-shooters on his belt. He was a treasure hunter and quite eccentric. I will always remember the day he was arrested for walking into a bank with his guns strapped to his hips. I guess that is illegal in California… We hung out with another one of our best friends, a Vietnamese refugee. He is a Buddhist, but was taken in by and lived behind a local Episcopalian church with his family. He had some stories to tell, and still does, of a world absolutely upside down, stories of last minute escapes from a war-torn land and leaving an entire life behind.

Another good friend of mine, who was a Jehovah’s Witness that happened to introduce me to the Hare Krishna temple, was diagnosed with cancer when he was a young child. Children’s Hospital wanted to amputate his leg, but his mom took him to Mexico instead for a special diet and a year of holistic treatments. He survived his cancer and would do these dietary fasts throughout my relationship with him, where you could see his eyes getting bluer by the day, as he exfoliated through his pores and orifices all the toxins that he said had built up in his system. I lost track of him and can’t find him on Facebook or Google, so I don’t know if he is still with us. He was an amazing artist, even way back then…

Another good friend of mine’s father, a German professor, was caught cheating on his mother, a French Catholic housewife, with a Chinese graduate student. The father was disgraced after the divorce and moved back to Germany, where he died alone. I also had a Pilipino neighbor that was a chef at a local Hawaiian restaurant. Evidently they were Muslim before immigrating to the US, but had cast it all aside in favor of secular values like the rest of us. I understand that the father lost everything due to gambling and alcoholism.

One of my best friends when I was in grade school ended up in Juvenile Hall with his older brother for breaking and entering and theft. Their mom grew marihuana amongst their tomato plants right in front of their trailer house behind the school. We went there for lunch sometimes. Nobody knew, including me. I haven’t been able to find him or his brother either…

There are many more stories about how my entire generation was seemingly doomed to disintegration, so I always thought that my brother and I were some of the lucky ones to have escaped such pitfalls and depravity in the world. When I speak to my old friends, they are always amazed and how things could have changed so much. They would even visit my parents, while my dad was still alive, just because they were remembered as a source of stability, I guess.

So, being this time of year, right before Rosh Hashanah, I shouldn’t be surprised to still be feeling the ground pulling at me. I tried to do the right thing with my mom, by encouraging her to dig deep with the little time she may have left in the world of action, and to make her decisions in life mean something lasting for her and for us all, but I left feeling that she was probably incapable. It was like that fog had just consumed what was left of her, as she headed into surgery to have the muck of cancer removed from her innards. It was like years of the sludge of built-up toxic waste had accumulated and was now overflowing into all of our lives, especially hers, I guess...

As you can probably sense, I am not telling the whole story here. Maybe someday I will share it with the world, but for now, I am going to try and cling to the light in the world and not dwell on the darkness. As a case in point, while traveling back to my home in Israel, I had a layover in Amsterdam for a day. I thought, “I should go to a museum or visit a café. I could wander around and see Amsterdam again.” I was tired from the long flight, but thought I could do it anyways. I thought that maybe I could even visit the synagogue where the Ramchal (Rabbi Moshe Chaim Ben Lutzato) prayed with his family. He had been banned from Padua, Italy for being dangerously close to the light, a real Mechubal, in a time that was still reeling from the escapades of Shabtai Svi, a false messiah that led the world into darkness in the 17th century. The Ramchal wrote some amazing books that explain our purpose here on Earth, as well as outlining the entire spiritual world and all its denizens.

So, I had a plan. I was going to find the Van Gogh Museum, find a little café, and visit the Ramchal’s synagogue. I got off the train and made my way to a tourist shop to purchase a map. I found the Van Gogh Museum on the map and began to make my way there. I was immediately assaulted by drug paraphernalia and sex stores along the street. I tried to cross the street and tripped on a train track, tumbling to the pavement and ripping holes through my pant-legs and into my knees. My knuckles dragged across the rough pavement and my glasses flew out of my shirt pocket, sliding to a stop a few feet away. I recovered, somewhat, stood up, and ran out of the way of an oncoming bicycle. I stood on the other side of the street, bleeding profusely from my hands and knees, while someone helped get my glasses from the path of oncoming traffic. I then wandered aimlessly, blood soaking my shirt and pants, until I finally found a beautiful public restroom to clean up in. I went into the men’s room, which glistened and gleamed, and attempted to relieve myself. There was no door and while urinating, I watched as people strolled up and down the promedade. The young woman in charge of the restroom kept circling behind me, stocking the toilet paper, as I tried to go. I was still bleeding. I washed up and left, tried twice to attempt a recovery of my Amsterdam plan, but ultimately, disgruntled from the darkness all around, caught the train back to the airport and fell asleep on the floor in a corner, waiting for my plane home.

I am very happy to be back home, in the land of light, even though I am still quite jet-lagged and my fingers can't type so well. So, just to finish up this year's commitment to tie each week's blog entry into the parsha, this week’s parsha is called Ha'azinu (Deuteronomy 32) and for obvious reasons, I have no idea what it is about. Maybe I will read it over the next few days and let you know next week…