All the Little Things 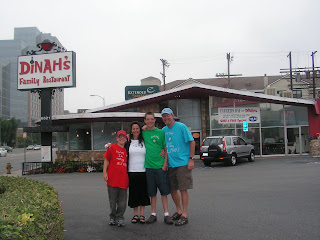 When we got to HaAretz we were all spinning from the journey we had just taken. This journey, which had started in Boulder, Colorado and brought us all the way to Netanya, Israel, where my gracious Mother-in-Law Ruth shared her home with us, was really just about to begin. But I am getting ahead of myself. Back in Boulder, my wonderful wife Adele, had been busy for one whole year stocking up on the essential things that we were going to need like Zip-Lock bags, Lawry’s garlic salt, lotions and oils, pancake batter, and a whole assortment of must have, can not live without items. I also had my moments like the time that I just couldn’t do without the nice little bike tool kit that I would need for sure because, after all, we were moving to the desert, a virtual no-mans-land. And since I was going to need to do all of the bike maintenance myself, I got a bicycle maintenance book too! Oh yeah, and the how to make cement countertops book was also a must because it is common knowledge that everything in Israel is made from concrete. We were as ready as anyone could have been for the boldest adventure we could have embarked upon. We worried that we forgot something important from the moment that we stopped worrying about whether we remembered everything. And then… Baruch Hashem…we were in Israel.

Actually it wasn’t that fast (although it sure felt like it). After the whirlwind of the movers wrapping everything up like a bunch of berserker spiders preparing for the winter (we unwrapped the weirdest stuff when we got here), we had a delivery of some special massage lotion by Laura Chizali’s parents… just as the moving truck, loaded and locked, rolled down the street. We stayed in Boulder for a while, to paint and clean the house for the new renters that were moving from Holland, and then with our two, exactly, 50 lb. duffel bags each (loaded with absolute essentials of course), we flew to L.A. where we stayed at the beach in Malibu with Adele’s sister Marsha. We were there for about a week and also spent some time with my brother Trent and his family and my Uncle Bob and his. On the last night before we left to the airport we painted Alyiah t-shirts to wear on the flight and toward the end of our time together, my Brother brought out a tattered American flag that needed to be retired. We burned it in the traditional way of the American Boy Scouts (he was a troop leader at the time), said our goodbyes, stopped in Westchester to wolf down a Dinah’s pancake, and the rest is exactly one year of history.

I don’t remember how I felt during this time; I just remember some of the little things. I remember when Zach stepped on something in the water at the beach in Netanya and cut his foot. We took him to the hospital and the doctor gave him a shot to numb his foot so he could dig around for something that might have been lodged inside. I remember that while we were there, a woman came in that had sprained her foot running for cover in Kiryat Shmone, a city in the north. I remember being worried that if the sirens went off while we were at Baba’s apartment I would have to half carry Zach down 7 flights of steps to get to the mamad. I remember sitting on the beach holding melting ice creams, one in each hand, while I perched a cell phone between my ear and shoulder to speak to a friend in the States that was very worried about his family, which had also just arrived to Israel.

I remember hearing the sirens while cleaning the upstairs bathroom in our new house in Zichron and running down four flights of stairs to the mamad in the basement. I also remember, about a week later, how we spent some time in the mamad with a cable guy who lived in Haifa and was so tired of running for shelter that we had to insist that he come with us until the sirens stopped. I remember when we were at Hof Dor (Dor beach) and heard the booms of missiles hitting the Port in Haifa, 30 minutes away. I also remember having all our stuff that we shipped from the States being stuck in the same Port until the war was almost over. Adele and her sister Kate braved the empty streets to try and get the container released and by an act of G-D were late because of a missed turn and weren’t in an area that was hit with missiles, just as they were supposed to be passing through it.

I remember when one of our new friends had to go into Lebanon to fight and during this time he lost some close friends of his. I remember being disgusted at how the English speaking news like CNN and the BBC, the only news that I could understand, were so biased against Israel. I guess some of these things aren’t so little; however looking back on these experiences is what gives them some life. While I was there, they were just happening. It was like riding a gigantic wave that started in Boulder, Colorado, and brought my family and me to a crossroads, a place to make a stand and to make a life. We were finally here, in the cradle of civilization, in the place where it all started. To quote my wife Adele, “we had left Paradise to move to the Promised Land.”

We are having our one year celebration soon and we have made so many new friends here that our house (G-D willing) will be overflowing with them all. I wish that some of the friends and family that are not in HaAretz with us now could be here as well. Maybe next year will bring some of you our way. We have room and everyone is always welcome.