Where the Wild Things are 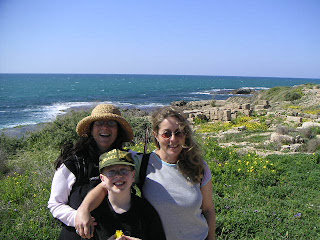 My family and I came to Israel for my son Zach’s Bar mitzvah only two short years ago. At that time, and every other time that I had visited, I felt something soothingly familiar. In the past this feeling proved to be quite elusive as upon returning to my home our lives just seemed to creep back in and wipe away, what I can only call, the aroma of this ancient and holy land. With lots of things to do and think about – kids, businesses, school, friends, house, the experiences became memories and the feelings we had of a tangible connection between our Souls and this place just seemed to melt into the unconscious. We talked about Israel and loved and supported it, but it was not the same thing. It was just too hard to grasp and to hold the substance of that feeling. It slowly vanished like the smell of a gourmet meal that has already been gulped down.

Two years ago, upon landing at Ben Gurion Airport I was greeted by my son Zach in one of the most amazing ways. I had left the United States a week after my family because of work and when Zach ran from the car he hugged me and looked at my face, into my eyes, and said, “We love it here, we want to move here!”

I was very tired from a long flight and just laughed it off but because of this interaction and my subsequent awareness I was able to contemplate the possibility of actually moving to Israel. By the end of the trip my family and I had become so used to the idea that it had grown into the bud of a plan. We held it for the next year while we prepared to move. We had many moments of, “no we can’t! And what are we thinking?” my business was one of the biggest dilemmas for me. I had just achieved a life long goal of having a fully functional woodshop and studio with every tool I ever… well, maybe not wanted but surely that I needed, a custom spray booth, a waiting list of clients… just everything. When these thoughts crept in I would just remember my son’s eyes on that day in Tel Aviv to keep my stride, to remember what was real and what was really fiction. On the plane back, Zach decided to wear a yarmulke all of the time. I told him that if he did then I would also and we both did for the entire year that we prepared. Maybe this served as a reminder for us about our experience in Eretz Israel and a reminder for when everyday life tried to creep back in and fuzz over reality.

When we were on our trip in Israel we spent a day at the beach at kibbutz Nachsholim with my sister in law Barbara. I think that this was a pivotal moment for both Adele and I and I have often wondered why. It was, after all, just a barbeque on the beach. We drove through the kibbutz on the walking paths to get there because the road was blocked with a barrier. We parked next to the sand and carried all our stuff a little ways over to some rock outcrops and cooked shishli, kabab, veggies, and pita on a little (as they say in Hebrew) “Grriille.” Josh was happily snorkeling in about two inches of water and we all just watched the crazy beach dogs roam around. Maybe someone owned them, but maybe not. Phoenician and Roman ruins were everywhere, on the cliff above us and in the water. Arab fishermen were bringing in their catches. The occasional kibbutsnik would wander down the beach and we were just living. It felt like the Wild West. It felt like I could do what ever I wanted to, with no rules or laws or restrictions. Yes there are laws, and to be more specific, there are Torah laws. Here in Eretz Israel we seem to be more on our honor. We live inside our souls and are constantly reminded of the tremendous history and cultural breadth just under our feet.

Here in Eretz Israel we all have a lot of faith it seems. Maybe it emanates directly from the ground or it is just in the air. The people that migrated in The States out west a hundred years ago must have had a similar faith. I guess I had to go east in order to go Out West. There are people here with guns stuck in there belts. There are soldiers with M-16s and Uzis on the streets. There are wild animals that I have seen for myself on quite a few occasions. Animals like boars as big as Rottweilers, Weasels or Mongooses, Hedgehogs, crazy Raptors and scavenger birds, Geckos and Tortoises, Octopi, Parrot Fish, Lion Fish, Coral and sea creatures, deadly Asps, little Jackals that howl outside my bedroom window, feral animals like Parrots, Dogs, and the family of Cats that live under my front steps. This is the real Wild West with good guys and bad guys, yeah just read the news… with savannahs, dessert highlands and undersea jungles. Snow and surf are here too, but most importantly for me, this is the place where life can really happen. The place where East meets West, where good meets bad, where the rules are there as, “more of guidelines”, to quote the movie Pirates of the Caribbean, and we are allowed to live from our Souls.

I barrowed the title for this piece from the children’s story Where the Wild Things Are by Maurice Sendak, because it speaks of so many hidden things and places. Here, in Eretz Israel, there are wild things, hidden and also seen. There are places that jar the senses with haunting beauty and places that exist only in our minds. There are creatures that, with a quick snort, disappear into the imagination. This is a place of ideas and of pure Soul. In it we can slide and we can tumble, we can float and we can also fly. We are caressed and soothed by its roughness, by its wildness. Here we can discover things that we might not have even dared to dream of. Eretz Israel is a place that allows the deep places inside us to come out and play… where all the other wild things are. In one Month we will have been here for one year. I am continually thrilled by the immensity of this experience.