Beit El, Bicycles, and other Beezwax 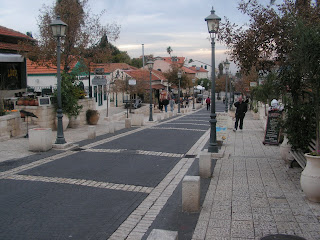 This story starts about 4 months ago when I got a call from my son Zach. He sounded out of breath and a bit manic and I had to have him repeat a couple of times what he was trying to tell me, his bike was stolen. Yup, this was the bike that we had bought in The States before the big move to the ‘wild wild east’ especially so that, with the help of G-d, he would grow into it both in size and in skill. Zach was talking to his girlfriend (at least that is the official story) with the bike leaning against a wall about three meters behind him. His friends had been riding it around a bit and so no one noticed when someone else decided to do the same… and kept on going.

I told Zach to look for it some more and talk to everyone he saw about it in case someone saw it happen and could identify the thief. No luck whatsoever… yet that is. The bike was gone. Zach walked home from the Midrachove (our mini Pearl St. walking mall) and did some serious pouting. He spent the next two weeks walking around town instead of biking until his Baba Ruthie (Grandmother) took pity on him and helped out with the cost of another bike, albeit a much cheaper one. Thanks Baba! (ve bahatslacha eim ha regel)

So now the story turns to about three weeks ago when Zach called me on my way home from work one day. He saw the bike! Some guy was riding it around and when Zach approached him he said that his Uncle gave it to him and then he rode off as fast as he could. I told Zach to follow him but he was regrettably on foot so he lost him but the story is not over yet! He described the guy to me and I drew a picture of him. It didn’t really look like him but just enough for a friend/neighbor to recognize him. She has had some similar problems with this guy and knew where he lived and with some searching gave us his name! We went to the Mishtarah (Police) with Abeles’ sister Barbara and filed a report. Long story short, the Mishtarah went into the guys’ house, took back the bike, and now we have it back! It was in pretty good shape too. It still had all its licensing stickers from Boulder on it, which really amazed the Police (evidently they don’t do that here) and it only had a bald rear tire, a couple of scratches, a ripped up seat, and a bent up rear derailleur. Oh well, its only money, right?

So that is bicycles and now we move on to Beit El. That is the community of Notsreim (Christians) that I work for. If you want to know more, here is a positive link: http://www.apologeticsindex.org/news1/an011022-20.html, and here is a negative link: http://kibbutz-beth-el.blogspot.co.il/2007/12/kibbutz-beth-el-inside-look-by-former.html. Actually, we are going to have to regress to the driving thing again. Yes, it is still ongoing. They told me at work that I need to have a Rishoui linhog malgisah (forklift driving license). Oyy, not this again, I have been driving forklifts since I was 25 years old! I now have to do 3 lessons for 4 hours each in a town about 20 minutes from here called Amicom! After that I can take the mifchan (test) which is who knows how long! Beseder, so be it… at least I don’t have to pay for it. I guess it is quite expensive.

What else? Oh yeah, Beezwax… Josh got a bee sting at the pool and it seemed like nothing but for the last two days his hand swelled to the size of a small cantelope. I think he is getting better now though, Baruch Hashem. There are lots of weird bugs here. We found a black spider in our bedroom that had a bright red lighting bolt on its back. Also, the other morning I got up and on my way to the bathroom stepped on something that crunched. I looked down and low and behold… a black beetle about the size of my thumb was wriggling under my barefoot with its guts squished out all over the place. Eyooww! And not to try to top that but we have been battling one of the 10 plagues for a couple of weeks now. Guess which one yet? I am just going to say one word… Keeneem! Sounds like one of those really trendy and healthy Boulder breakfast cereals doesn’t it? Well it’s not and, just as a precaution mind you, I have a shaved head to prove it! Are we all grossed out yet? I just had to talk about some more wild things. Sorry, couldn’t resist.

Be well everyone,
Blessings from the Holy Land,
Drew.
Posted by Dnoll at 21:21
Email ThisBlogThis!Share to TwitterShare to FacebookShare to Pinterest
Newer Post Older Post Home