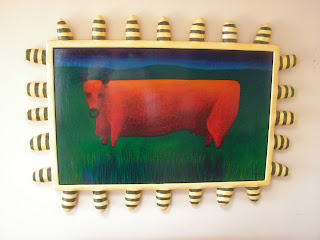 Since I am an artist, both by training and by, Baruch Hashem, G-D given artistic genetic coding (we can just call this G.g.a.g.c. for short) I have lived my entire life with the goal of indulging the creative process. Since my third grade class with Mr. Gillespie, I have been producing above average artistic extrapolations from the world around me and from my own inspirations. Throughout the later stages of this process (about the last 20 years) I have wondered deeply about the dichotomy that seems to be present in the Torah regarding this. It wasn’t until recently when I read the first part of this apparent dichotomy again in Parsha Yitro, in which the fourth of the ten commandments which were given stated, “You shall not make yourself a carved image nor any likeness of that which is in the heavens above or on the earth below or in the water beneath,” that I began to really get a little nervous about this G.g.a.g.c. deal.

I asked around a little and looked up some different translations as well. One translation was given as, “It is forbidden to worship an idol by means that is unique to it.” Another translation was, “do not represent (such gods) by any carved statue or picture of anything in the heaven above, on the earth below, ext...” a literal translation is “Do not make.” A later commandment (20.20) also states that we are not to make anything representing something that is ‘with G-D’ such as Angels and replicas of articles from the Mishkan (Tabernacle) such as the Menorah. One of the more strict explanations that I was given was that if G-D tells us not to do it, we don’t, and if G-D tells us to do it, such as with the construction of the Mishkan, we do it. Well, that doesn’t really solve the problem of what ‘it’ is and what about all that raw G.g.a.g.c. that Hashem doled out? What is that for anyways? Well, I am getting a bit ahead of myself now.

You see, in the last two Parshiote, we read about Betzalel. We read about how his G-D given inspiration (or maybe G.g.a.g.c.) would enable the Israelites to design and build the Mishkan. We also read about how the Israelites made a golden calf and proceeded to worship it (avoda zora, idol worship), causing many to perish. It seems that these Parshiote along with a few around it are all about art and craft both of the most high and the lowest of lows. Hashem goes into incredible detail about how to construct the Mishkan and then gives divine inspiration to a few to lead the others in the crafting of the greatest masterpiece ever produced by man… a home for G-D. By the way, he also tells us again to rest on Shabbat right smack in the middle of all this, but that is another story…

So where do I go from here? At the moment I am as mystified as I was when I started writing this. We seem to have been given all the tools to sort this out and yet, I keep getting all kinds of different ideas and interpretations about how to deal with this apparent dichotomy and we know that there are no real dichotomies in the Torah, just inability to completely decipher G-Ds words. Maybe I should just stop trying so hard and start painting again; put some of that G.g.a.g.c. to use. Yaaa, that sounds like the right path and don’t worry, I’ll stay away from images of you-know-who and everything ‘with’ him. I have a really great Post Modern, Deconstructionist, Minimalist idea that I inadvertently got from the same guy that gave me the very literal advice about how to read Hashem's commandments. (Via the G.g.a.g.c. network delivery system I am sure) Now I'm feeling it... (Can you sense the smile on my face?)