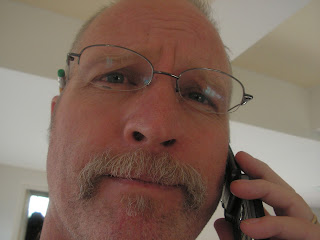 I decided that my 50th year on the planet in this particular incarnation of mine is going to be the best year ever. Number 49 seemed to be a really bad one, as bad years go for me, so I am going to get back up and do it higher than ever. The first thing I did was to shave off my white beard, leaving a ridiculous looking mustache (yeah, I'm smiling right now). Now maybe I am going to take after one of my childhood heroes, the Danish vagabond Eiler Larsen, or more commonly known as the Laguna Beach Greeter. He was always waving and smiling at people, even people he didn't even know! I heard a tale recently about how Yochanan ben Zakai, the leader of the Jewish people during and after the destruction of the Second Temple in Jerusalem, would also go out of his way to say hello to passersby, even before they could say hello to him. What an amazing thing to do!

Speaking of the dastardly number 49… that is also the level that the Jewish people sunk to in Egypt, before they were swooped out, just in the nick of time, by Hashem and a plethora of miracles. Segue into this week's pasha: Shmot (Exodus 1:1-6:1). Yeah, we are about to embark upon the Exodus, baby! I'm just going to try to catch that wave, if I can… It's like when we count the Omer; we never count the 50th day, since it is just beyond our ability… or something like that. 50 is the realm of Heaven, not of this Earth. We are leaving the exile and traveling into the bosom of Heaven, strait to the Land of Israel!

Hey! This year is the 6th year that I have lived in Israel and, yes, 6 is a good number, too… You know: the 6th Day and all that? Adam ha Rishon was created on the 6th Day (it must have been Rosh ha Shana too, so Happy New Year…!) and the world was perfect then, without darkness to ruin the paradise that we were meant to enjoy with the company of God. It was Friday afternoon, just like right now for me, and Adam ha Rishon had already asked for a companion that was separate from himself. He had already asked to have Eve extricated from his back, splitting Him/Herself right down the middle, and creating Adam and Eve, male and female. It could all have been perfect, if only we hadn't let our ego run amok. We were partners in the Garden with Hashem and, due to our selfish pride, we allowed the Snake to be born, then to sway us down the path of darkness, away from perfection, the sublime relationship between each other and God, and then swirling into chaos…

Well, I'm not going to do that (bisrat Hashem!). I figure that if I am friendly to everyone around me, waving and smiling as much as I can, it can only be a good thing, don't you think? Well, I hope they don't lock me up or something… OK, since I don't have too much time before Shabbat comes, I have to go and get ready. When Day Six ends, I want to be as ready as I can be for Day Seven, because once it begins, there is no going back. Day Seven is my recharge day, the day that I push the big reset button in my life (yes, I'm smiling again…!). Can you feel it? Hmmm, yeah, I'm waving too!

I love all of you out there! Shabbat Shalom!!!
Posted by Dnoll at 15:20
Email ThisBlogThis!Share to TwitterShare to FacebookShare to Pinterest
Newer Posts Older Posts Home
Subscribe to: Posts (Atom)