Madagascar and the Mora Mora 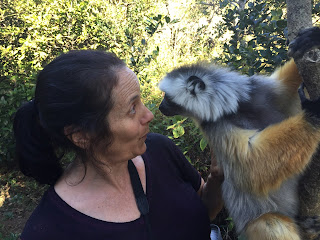 I always thought of Madagascar as a big island with weird creatures inhabiting it. Actually, I wasn’t too far off from that assessment, my understanding having come from spending more than a month traversing its girth and length in road cars, dirt cars, water cars, boats of all sizes, planes that almost didn’t fly (Air Madagascar, you know…) and by foot, huffing it up and down steep wooded hills, crawling through dark geologically fascinating tunnels, cringing over rope bridges, wooden bridges and piers, and broken-down automobile bridges, too. We traversed as much as we could (barring the heavily touristic areas, of course), starting in Antananarivo (Tana), the capital city, where the head honchos rule, it seems, with a titanium gavel and inequity from everything physically binding including gravity, or is it gravidity. We met amazing people from all over the world, including … yes … from Madagascar. We chose our travel destination with a sense of logic, but you know how that goes … “What am I thinking now, how are the neurons firing in my brain based upon input that was seemingly randomly inserted, but wasn’t random at all, at least that I can ‘explain’ to myself…” It was August; Israel is miserable then; there is not a lot of work happening then, since (almost) everyone leaves; we needed someplace wintery, since (yes) it’s miserable in Israel then; we needed someplace with interesting animals, cultural phenomenon, and adventure; I wanted to lay on a beach, the Mrs. wanted to ‘not lay on a beach,’ I wanted to have inspiration, and the Mrs. wanted to relax. These were our requirements and Madagascar fit the bill, perfectly.

We had big plans to fly through Istanbul, since it was affordable for us that way with Turkish Airlines, and since I hadn’t spent any time in Turkey before. We were to spend a couple of days exploring the museums and sites. I really wanted to see the Paleo-Hebrew Shiloah (Siloam) inscription from the tunnel of King Hezekiah that the Turks took when they ran our part of the world during their occupation of it, but it wasn’t to be, it seems… There was a coup attempt and police, military leaders, and teachers were being thrown into jail, so we had to cough up some more cash to limit our time in Istanbul to a quick connection in the airport. On the flight the entire coup attempt was explained with Fascist efficiency using a glossy magazine that passengers were (almost) forced to read out of boredom while sitting on the tarmac. They explained that, you know, there was a broad range of individual leader insurgents from all walks of life, religious, secular, right wing, left wing, intellectual, anyone with a question for the teacher, and, of course, terrorists, lead mostly by some guy living in the US (a real rebel-rouser lefty ex-Turk), that were trying to subjugate the proud people of Turkey and take advantage of the freedoms Turkey has to offer. So, I guess I’ll have to save the plaque for another time, but the real adventure was Madagascar, anyways, so here we go!

We hit the ground running in Tana, having been picked up at the airport by our guide and driver. We arranged the trip from Israel by using Trip Advisor and, by far, the best, most reasonable guide, by our judgment, was Belaza from Gassitours. If you work with him you’ll see what I mean. We were whisked off to our hotel, with me shooting cellphone pictures out the window from the back seat at the incredible cacophony of visual imagery coming at me faster than I could even process. The urban landscape was peppered with rural enclaves; rice paddies abounded, but with smoking kilns of drying bricks interspersed with, seemingly (at the time), shacks and makeshift structures. There were drying clothes laid out perfectly in matching outfits that brightened every riverbank, and human drawn carts that pulled heavy loads of everything from thatching to hand made bricks, interspersed with the occasional zebu-cart filled with smiling people or wares to the market, or bicycles loaded higher than the rider with charcoal bags or produce. I couldn’t believe my eyes. And it didn’t stop there. Madagascar is a place that will sit in my subconscious forever. Here, let me explain:

In my world view the world has always been a battle between the spiritual and the physical. We have seen throughout history that the physical has mostly prevailed, since the spiritual almost always seems to get bogged down in religion. Let’s just say, for the sake of this piece, that religion has become the fringe territory of the physical, as it tries to capture the minds and souls from the spiritual. Oy. I know. That’s just too obtuse to follow… Okay, let me start again. I would say that the most difficult part of my adventure in Madagascar was the communication gap with everyone and everything. We are forced to use language, be it body, verbal, or otherwise, to communicate and in Madagascar I just always felt that I went misunderstood. The way I tended to gravitate in order to overcome this was to smile, be patient, and adopt a Mora Mora attitude about things; and I hit the nail right on the head. What is Mora Mora, you may ask? Well, this is the essence of both happiness or perfection, and the Malagasy (people of Madagascar) way of life. By adopting this strategy the result is generally a sense of pleasure, or longitude. Mora Mora means, literally, slowly slowly. In Hebrew it is le’at le’at, but it’s really a different kind of thing. Le’at le’at is said only when there is a sense of frustration in the air, while Mora Mora is a way of life, seemingly known from birth. The people in Madagascar have suffered some of the worst possible abuse from the world and from themselves. Their leaders are some of the most corrupt on the planet, or at least we can see the abuse, unlike other countries where the leaders are so, so slick that we can’t as easily. It’s just obvious in Madagascar, kind of like Turkey, I guess…

The people are simple, smiling a lot, and they really seem to love life. There are many tribes with different cultures, as well as many religions, such as Catholic, Protestant, Muslim, Animist, and even Jewish. They don’t fight among themselves about who is right or wrong, even in the far reaches where people are poor and totally tribal I saw Muslim girls playing with others, Animist, Christian or otherwise. I could tell only because of the head covering on the girls, but everyone I talked to seemed surprised at my questions about their religious leanings. They were happy to explain, regardless … however. They have all, it seems, adopted the Mora Mora strategy in life, you know: easy goes it, slow down, think long term, don’t worry … it will all work out. I resonated with it completely. This is how the entire world should operate: Mora Mora. I just wish we could get our leaders on board, who all, without exception it seems, opt for a different mantra altogether. Me’a Me’a is just such small thinking, especially for the leaders that we elect to rule in our stead.

Shavua tov, kulam, and enjoy some select pics from our adventures in Madagascar!

If you have any questions or you'd like to contact me directly, please visit me at www.doronoll.com and go the the contact page. I'd be very pleased to hear from you!
Posted by Dnoll at 10:48
Email ThisBlogThis!Share to TwitterShare to FacebookShare to Pinterest
Newer Posts Older Posts Home
Subscribe to: Posts (Atom)