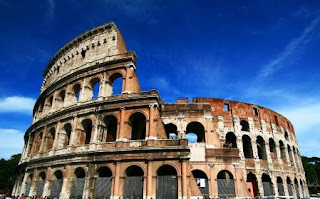 My favorite band of all times is coming to play in Israel! They are coming to an ancient Roman theater in Caesarea where 2,000 years ago, they used to do all kinds of unspeakable things… But next month, I am going to see Led Zeppelin! I had great plans to get the best tickets that I could but… ended up not getting out of bed early enough to stand in line. You know how it is, the alarm went off at 2:00 in the morning and it was soooo cold out! I figured that I could stay in bed until 5:00 and still get really good seats. Then at 5:00 in the morning, it was still really cold, so I figured that I could just get up at the normal time and still get in. I knew that I wouldn’t get the best seats but, hey… it was cold!

When I got to the ticket booth the line was wrapping all the way around the Coliseum and down the gravel road a bit… oy! Well, I waited for about 4 hours and eventually the line started to move. In the end, I got standing room only tickets on the far side of the theater up in the back. Well, at least I got in; there were a few people behind me that couldn’t get in at all! One of the guys was talking about how maybe he could get a job sweeping or cleaning the bathrooms or something, just so he could at least hear them playing.

I’m imagining what it will be like when I walk in to the Roman amphitheater. They let people in down by the stage so, I will be able to see all of my friends sitting in the front row as I walk up, up, up, all the way to the back... I am not looking forward to that. I spoke with one of my friends and he was really disappointed that I didn’t get up on time. Oy, I am disappointed in myself! I had one chance at it and I blew it... What was I thinking anyways?

So, the concert is this weekend and now I am almost dreading going. The closer it gets, the more dread I feel. Maybe I should just not go at all. I bet I could scalp my tickets out front on the night of the concert, but then I wouldn’t even get to see anything! STOP.....

For those of you that think it’s still possible to see Led Zeppelin in concert, I am just telling you now that it isn’t. This is an exercise in thinking ahead; you see, this is what it is going to be like when we move on to the next world. Just for the purposes of this little metaphor, Led Zeppelin is G-D. Because I slept in when I should have jumped at the chance to be as close to Hashem as possible, I get to sit way up in the back and I can’t even complain about it! What am I going to do, ask Robert Plant if I can come closer to the stage so I can see them play? “It’s not fair! All my friends are right here in the front and I have to be so far away. Why are there even seats so far away that you can’t even see anything?” Then I thought about the guys that were willing to clean the toilets, just to be able to hear a muffled murmur as it echoed around the tiled walls and paper strewn floors of the bathrooms.

What is the moral of the story? If you know it is the right thing to do, just do it! Don’t wait, don’t vacillate, don’t judicate, just do it! I knew it was the right thing... and when I decided to sleep in because it was cold; I listened to my most trusted advisor. You know, the one that is always whispering, “You deserve it. You have it coming to you. It will all work out in the end. Go ahead, take what you want now. Life is short; live it while you can.” Now I am in standing room only... in the back.

All I can say is, “Thank G-D I figured it out with enough time to (just maybe) make a difference!”