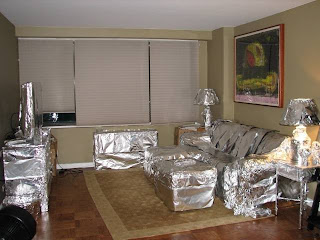 It is that time again... Pesach! And that means searching, uncovering, removing, and the elevating of each little moment in life from the past year. Because I am a regular person, just like everyone else, I can’t remember every single moment of fluff and hot air that I stuck under my hat, I am just going to do what the other regular people do... search around until I find some Chumetz (that hot air filled fluffy risen bread like stuff that makes me think I am really something special in the world) and obliterate it with a passion!

In the big scheme of things, the Chumetz that we are supposed to uncover, we will inevitably be able to find. Hashem only tests us as far as we can handle it, so we never find something too large to deal with. This idea reminds me of when I was just a little tike and me and all the neighborhood kids (picture The Little Rascals with skateboards) built a double-decker fort in the backyard. We styled it out with rock-n-roll posters (not quite triple-x, but close), wall to wall shag carpeting, a double mattress on the second floor, and multiple secret hiding places in the walls and floors for our treasures. The problem was that we didn’t really give it an adequate roof-job and, lo-and-behold, when the rains came, we stopped meeting there.

The double-decker fort just became an occasionally thought about memory, until the sun came out again a few months later. I was warned by my friend one morning that I needed to see something in the fort. He said it was something alien and didn’t want to tell me more about it. I just knew that whatever it was, it scared him. We got my little brother Trent and another friend that helped with building the fort and slowly opened the door. It was wet right through and left a film on my hand when I let go of it. A waft of musty fluffy old hot air stuff hit me in the face. I peered in, not knowing what to expect and didn’t see anything at all. I waited for my eyes to adjust to the gloom and... still I didn’t see anything.

I thought at the time that it was just a big joke and someone was going to jump out at me or push me in so I backed off a little. But when I saw my friends’ faces, I knew that it was real, whatever it was, so I looked again. This time, I looked down where my friend told me to look, insisting that it was there... my eyes adjusted and I saw something. It was the color of a kelp ball, kind of snot yellow, just like the seaweed that emerged from the deep and onto the beach after a big storm. As my eyes adjusted further, the alien thing began to take shape. It was about a meter long and was ruffled at one end, while smooth and round at the other. I didn’t know what to make of it—it looked alien, whatever it was.

Interesting enough, I thought of this story today as I was cleaning the Chumetz out of my stove. I have this weirdly designed stove top that has these flanges that you can never clean under. So I got my screw-gun and unscrewed the things to get under them. When I removed them, I found something really quite disgusting. Food had been gathering in one little corner for probably a year, since the last time I looked for the deep dark Chumetz strewn places. It was also an alien thing and seemed to pulse with a life of its own. It had been absorbing everything that had been spilled on our stove-top for the past year and did not want to move. It liked its moist little hiding place.

Seeing this alien thing, growing on my stove-top, I thought how, on Pesach, we all cover everything with tinfoil. It seemed to me that this is really backwards. We should cover everything with tinfoil all year long to prevent the Chumetz from getting into those deep dark places and then, for Pesach, we could uncover everything and, walla, we are Chumetz free! The problem is that we are just regular people and the whole idea is to find the Chumetz in our lives. We can never prevent it from sinking in and grabbing hold, waiting for the life giving moisture that allows it to grow and sprout and develop into something pompous and self-appreciated... the Chumetz of our lifes.

The alien growth inside our double-decker fort gave me the chills when I saw it. I thought that it must be a joke and was just some kind of a chunk of seaweed. Nobody wanted to go into the fort and see what it was, so I manned up and did it. I had to duck to get through the door and when I stepped inside, the smell was overwhelming. It was like a deep dark hole in the ground with growing and rotting things everywhere, returning to the earth and sprouting anew. The floor of the fort was old plywood that had rotted and crunched and broke under every step, revealing the under belly of the place where the alien thing seemed to emerge from. With my feet, I found the rafters that we had put under the plywood and balanced on those so I would not step into one of the dark holes I was making with each footstep. As the alien thing got closer, I could see the light glint off its shiny surface in a perfect outline of the door behind me (my only exit) and as the outline of my silhouette grew when I approached the alien object, one careful step at a time, I had to let go of more and more to proceed any further.

My friends were all peering in through the opening, yelling at me to tell them what I saw, but I couldn’t tell what it was yet. So, I kept going and got right up close to it. The sweat started to drip off my head as the moisture from the dark hole gathered on my skin. I reached out my foot to touch it very slowly and at the moment of contact, it crumbled and disintegrated, right before my eyes. It must have been some kind of strange fungus that had grown from under the rotten plywood floor of our double-decker fort and had nothing but moist, fecund air inside of it. The chills I had earlier, now were overwhelming me, so I stumbled backwards and tried, in vain, not to fall in the footstep holes that I had just made. We all ran as far as we could get away from that fort and didn’t return until the next day, when we discovered that the alien growth was totally gone. Nothing remained of it and we all began to wonder if there really was an alien fungus to begin with. The physics of those fungus particles had insisted that they deflate and return to the unknown nothingness that they had come from.

Pesach is a time of personal accounting, a time of artificial ego deflating, and a time of release and freedom into the world. We spend all year trying to figure out who we are and fill in all of the deep dark places of our minds, bodies, and souls, with the fluff of that search. Then, all of a sudden, we have to quickly pack only what we need for our lives’ journeys to continue, can only take the bare minimum of our possessions, and only what is absolutely necessary. Mitzraim means two things in Hebrew. It means Egypt and it means ‘place of narrowness’. In order to get out of that place of narrowness in our souls, we need to cut loose all of the hot air that we have gathered, and just like the alien fungus on the floor of the double-decker fort crumbled and disappeared at the slightest touch, the hot air that we have gathered will crumble, as soon as it realizes that it no longer has even the pretense of a foundation to grow in.

Freedom and liberation from all of the hot air filled fluffy risen bread like stuff to everyone!