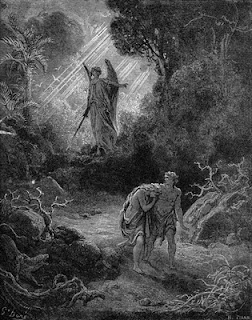 Think about this:
When G-D made Man, Man was One with the Universe. The Angels, according to the Midrash, even had a problem telling the difference between Man and G-D. Then what happened? It seems that G-D took pity on Man, saying, “It is not good that Man be alone,” and made man and woman from the original Man. This was the first cell division and from there, it has been a series of cell divisions, leading to more, and more, and more. We are now divided in so many ways that you have to wonder, did G-D intend for us to have degenerated so far when He made that first split? Having been made in the image of G-D, we had the free will to decide to eat from the tree and that caused the second split—when we were expelled from the Garden and forced to split by the ‘stress’ (generally mistranslated as pain) of child birthing and rearing and by the stress of the toil of the earth to survive. Then we split again when Cain killed Abel. Then we split again and again and again, all because Adam was... pitiable?

This must be that darn pesky paradox thing again. How can we say that G-D made Adam whole and then, after He noticed the pitiable nature of the separate-from-G-D-being that Adam was, He decided to split Adam some more? I know, I know, Hashem is beyond understanding. All we can see is the results of Hashem’s actions in the world. So, why already, did Adam have to be split into two? Why, already, does the world seem be a constant spiraling downward spin into... WHAT!?

I know... It sounds like I have a beef to pick with Hashem. Let’s just take a moment to calm down and talk about a seemingly paradoxical element to this week’s Torah reading, Va’yera. Abraham was one of the most significant people in human history, the father of Islam and of Judaism, which begot Christianity. He was known for his righteousness, sense of justice, and also for having an intimacy with Hashem that was not seen again until Moshe. When G-D approaches Abraham and tells him that the wicked people of Sodom are going to be destroyed for their evil ways, Abraham passionate

ly argues with G-D, appealing to His sense of mercy and justice to save the people. Remember, these are people that Abraham knew were bad, didn’t really even know them personally, and still he barters G-D down: save the city if there are fifty innocent people, forty, thirty, and so on.

So, then we come to the Binding of Isaac, when he is to slaughter his own son on an altar. Abraham just says... OK. He does not say a word to save the life of his own son, the miracle child of his old age that he loved above all others? Abraham is universally noted for his silence at this point. Sounds like a paradox, doesn’t it? Why wouldn’t Abraham stick up for himself aga 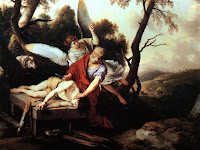 In the end, Sodom is destroyed regardless of the effort that Abraham made, and Isaac is spared, regardless of the silence that enveloped Abraham. Now it sounds like it doesn’t matter what we do... It is always going to end up going the way G-D wants anyways.

Or, maybe we can make a difference. Maybe the response that Abraham gave in both scenarios was what Hashem was looking for all along, maybe it isn’t always about what we ‘think’ we want.

Now think about this:

What would you do if you received ‘inside information’ that something bad was going to happen to someone you hated?

Is justice a universal phenomenon, or is justice different for you than it is for others?

When you judge yourself, do you judge more severely or gentler than you judge other people?

And last, is it OK for innocent people to suffer for the greater good?

I have got some deep thinking to do if I am going to be OK with this seemingly paradoxical reality, before I can ever try to understand why we were split in the first place... Well, let me just add that when G-D created the universe, everything was good up until one point. God finally declares “It is not good,” when He saw that Adam was by himself. Biblical commentators also add that this verdict was meant to give qualification to all the previous positive verdicts. All the things G-D created are good, but only if they are shared. It seems that ‘Man’ was created as a social animal and had to become ‘man and woman’ in order to share life with its full meaning. It takes two to tango, so to speak... That must be another reason that the Torah starts with a Bet at the beginning of Bresheet (Genesis). A bet is the number two and gives us all an inherent choice to make, “Should I be haughty, selfish, and alone, or should I be selfless, loving, and together with others—ultimately One with the universe?”

Maybe that is why Isaac’s name in Hebrew is Yitzchak (to laugh). He had to have noticed, first hand, the cosmic joke of th 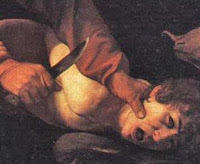 e paradox of the universe as his father’s knife was descending to slice his throat.

OK, you can stop laughing now, (you know who I am talking about)...