Flotilla the Pun and Da’Ass Boat 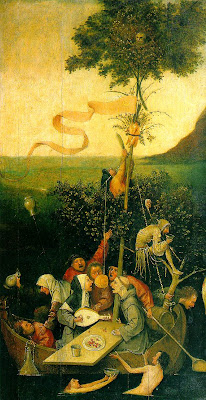 I tried to explain to some of my work colleagues, the German Christian Zionists, the other day, how it is that God could have created both the ‘good’ in the world as well as the ‘bad’ in the world. I know you are all enlightened and don’t need such a simple explanation, but for the sake of the title of this blog alone, I feel I need to elaborate. I used the simple analogy of God holding his hand in front of a light bulb, causing shadows to fall on a wall, where we, simple two dimensional ignoranimuses, happen to live. It was a difficult analogy for these folks to catch, since they believe that there is a kind of duality in the world between a malevolently black evil and a brilliantly white good and they tend to discard completely the grays and sloppy moss covered joinery connecting the two. At the end of a somewhat exasperating conversation, they seemed to comprehend, but the next day I found myself beleaguered with questions... and unremittingly so. I think that ultimately, I seemed to communicate to them, but I really can’t know for certain, which is precisely my point. We are all playing in the gray matter between luminosity and murkiness at any given moment. The problem is that sometimes, we tend to fall into an ill prepared for supercilious ambush. In our two dimensional world, it is easy to presuppose that the illumination and obscurity that dances on the wall around us ‘is’ the omnipotent, supernal being, God and we are caught in the middle, mere pawns in an unbeknownst to us illegitimate reality.

How can we resolve this conundrum? This is the real difficulty... Really, in order to accomplish a task such as this, we will need to reverse our insatiable desire to classify every friggin thing into a vast array of categories and recognize that the light and shadow business on the wall is simply, ‘the writing on the wall,’ just the end result, the manifestation of God’s dealings with the world, the mark left behind, or the skid marks that God left on the asphalt of our consciousnesses as He attempted to abruptly slow His pace out of his pure love for us, in an apparent attempt to accommodate for our imbecilic natures. It seems that ultimately, in order to even ‘seek’ truth in the world, we need to suspend our desire to label everything and catalog it into specific, comprehensible file boxes stacked painstakingly on a shelf. We need to open our mind enough so that we can see the light and dark within the gray and be OK with it. We need to know that God made evil because he loves us.

Take for instance the flotilla that is just starting to break free of the quagmire of international hoopla that has plagued it for weeks now. Its intension is to sail towards Gaza, attempting to make some more supa-dupa-stupa-hoopla and maybe kill some Jews along the way. The organizers have made it very clear that the ‘Freedom Flotilla,’ as they are calling it, is intended to set right a wrong that has been committed in the world. I heard the other day a quote, I think from Netanyahu, calling it the ‘Provocation Flotilla.’ Both of these flotilla names are categorically true, but each based solely on the particular facts that we are willing to incorporate into our world views. For the Freedom Flotilla organizers, the facts have been weeded down to what fits their particular political agendas, things like, um… I really don’t have any idea why they want to break the legal maritime blockade of the violent, mega-maniacally run, terrorist state… a lack of building supplies, medical supplies, and food stuffs? Not likely, considering that International statistics indicate that Gazans have a higher standard of living than people in nearly all of Africa, including South Africa, as well as parts of Asia, and in the Middle East. Actually, Gaza faces a surplus of goods, not a shortage of goods, according to recent press reports.

I don’t know where they are getting their ‘facts’ from, but the facts that they don’t seem to see are things like the new Gaza shopping malls that have been freshly built, the stunning beaches that are filled with a burgeoning middle class population, and the grocery stores that are brimming with brilliantly colored produce, consumer products, and sweets. All of this is not accessible to western reporters and the photographs of these realities on the ground have had to be smuggled out of Gaza, because of their counter productive nature; after all, their economy is fueled by a vast majority from international donations and good will. They don’t have any export, industry, or even any educational system, accept maybe the hate that is peddled towards the Jews, the Christians, and the Infidels everywhere...

I guess what ends up happening, though, is that the world only sees what they want to see, just like my workmates that just couldn’t get past their own world views to see the truth, even if it was wearing a shoe for a hat... It seems that about half of the world wants to believe that Israel is an oppressor operating to sever the supply lines of democracy, peace, and normalcy for their own political gain and in the process, starving old people and small children. This half of the population even tend to look the other way and, maybe not say, but think, ‘They had it coming’ when missiles are launched at kindergartens and school buses, killing, maiming, and really freaking out the local Israeli populations.

The only thing that can explain this totally irrational mindset is what I am going to call the ‘Da’Ass is Talking Syndrome.’ In general, we don’t identify with being donkeys unless it is a cartoon, like the donkey from Shrek or something. Remember that talking donkey with the voice of Eddie Murphy? Where do you think they got that idea from, anyways? Yup, they got it from this week’s parsha, Balak (Numbers 22:2 – 25:9), in which Bilam is considered the prophet of the non-Jews and apparently (by some commentators) as great as the greatest Jewish prophet, Moses! Yup, we know that Bilam was no schlepper... and yet, he didn’t think anything was out of the ordinary when his donkey, the same one that he had raised and lain with since he was young, wouldn’t move forward upon Bilam’s insistence. Even when his bosom barn buddy spoke to him, with lips quivering and everything, Bilam still didn’t discern a thing that was atypical, unusual, abnormal, or even extraordinary! It was only after Hashem had to forcibly lift the vale from Bilam’s eyes-wide-shut that he was able to see the ferocious sword wielding angel blocking the path of Bilam’s ass, causing the awe-un-inspiring prophet, Bilam, to fall flat on his face...

This whole episode reminds me of another story from Midrash Rabbah, Vayikra 4:6. It begins with a tale of a group of people that were all traveling in a boat. As they got further out to sea, one of the passengers removed a hand drill from his luggage and started drilling a hole beneath his seat. The other passengers, noticing what the man was doing, asked him, “Why are you doing that?”

The man with the drill replied, “What do you care? I purchased passage on this boat and this is my seat, not yours!”

The others replied, “But, but, but... you’ll flood the whole boat and submerge us all beneath the waves!”

This is exactly what Bilam was doing. He was so focused on his mission to curse the Jews that he was blinded by the reality in front of him. Bilam was a prophet, but he was blind as a bat ignoring its’ own radar when it came to something that went against his world view. We can all learn from this man’s ass and from the man himself... We ‘do’ tend to cut our grooves deeper and deeper, as we move through life and eventually, many of us may have what we might even call a ‘midlife crisis.’ We can call it whatever we want to, but in the end, this can only be our spirit, psyche, heart, essence, or soul, trying to redirect our lives before it is too late.

Just like the other day... when I was perusing the hearsay on the news and noticed first and foremost, on the same exact front page, a story about the discovery of a 16th-century temple in Sree Padmanabhaswamy Trivandrum, India of a 22 billion dollar treasure trove of gold and jewels. Then I moved to a story about Israel's cabinet decision that approved extending daylight saving time in 2012. Then, and only then, did I notice the first story on the page about an Israeli Air Force strike on a trio of Palestinian terrorists in Gaza who were preparing to launch a 'projectile' into Israel, which killed two of the terrorists and injured a third. We just seem to block out the stuff that we don’t want to hear about or are just too inundated with, plowing our groove a little deeper, scratching into that old broken record just a little more, and ignoring what doesn’t fit precisely within our current disposition or worse, our world view.

Don’t you wish sometimes that the world would have an immediate impact on us when we refuse to listen, when the ass is insisting that we pay attention and we pretend that we didn’t hear a thing? But, of course, we are entirely too occupied within our own egotistical engorgement to take note... If there was only some mechanism to correct our path midstream, before we see the bubbling squirt of the sea through the bottom of the boat, to find it necessary to endure a midlife crisis, before we fall on our faces like Bilam did. It could be... maybe, something simple, something like our toes curl or our eyes flutter. It could be something like a buzzing that goes off inside our heads, like a warped siren singing the blues, warning us of impending doom while skipping down a mistaken path to nowhere, arm-in-arm with a drunken piano.

It could be like Pinocchio, whose erectile proboscis grew when he lied; come to think of it, didn’t he disregard the obvious woody growth popping out in front of him, right between his eyes, even while everyone else bashfully noticed that something was up? Oh yeah… in the end he turned into an ass as well, blowing off the Blue Fairy and shipping out to a fairytale far off land… Well, maybe that means we already have a way of knowing when we are bearing down erroneously toward a hot flatulent brain bath. Maybe we are just not paying attention to it; maybe we have a kind of sixth sense! Maybe our intuition is telling us in every moment which direction to travel in. Maybe we already know which roads to avoid like the clapping of a thunderous woodsman’s axe as it descends onto our panic-stricken gaseous craniums. I know it has to be more complicated than that, seeing as the world hasn’t figured it out yet. I just hope that when the guy drilling under his seat starts hearing the rest of us tell him that he could go blind as a bat and to discontinue his impetuous desire to merely blow smoke up his own ego, he will see, once and for all, that he is on a ship of fools sailing to a far off fairytale Gaza-land, while trying to constrict the world’s collective vision by amplifying the scope and breadth of its blind spots…