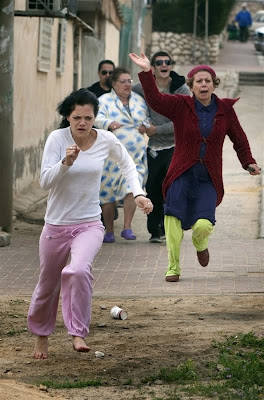 Well, this has been a doosie of a week, hasn’t it? Technically, of course, this week began on Friday with last week’s blog post; so, I’ll start there. When we woke on Friday morning, right up to our arrival in Beersheva two hours later to visit our son at the base, we weren’t sure that we would be able to even see him due to the terror that was afoot – well, unless you ask the United Nations, which will ‘not’ condemn the entire episode as ‘terrorism,’ after Lebanon's representative rejected the measure. He said that Lebanon would endorse a condemnation of the (terrorist) attacks if the council condemns Israel, as well, for killing the ‘terrorists’ who planned the attack. Um... isn’t that circular logic? Actually, I have no comment on that idiocy... But, no surprise there, really, since it is no coincidence that Lebanon – the only member of the Council that blocked the measure – is ‘itself’ controlled by Hezbollah, a Palestinian terrorist organization. By the beginning of the week, Hamas (the terrorist rulers of Gaza) declared a ‘cease fire’ from the violent terror that had claimed at least 8 innocent people (including woman and children shot at point blank range), at least 30 innocent injured people, and over a million innocent people in the south, who were traumatized to one degree or another, my entire family included...

So, what do you suppose all of ‘this’ hubbub is about, anyways? Maybe if we employ the Jerome Glenn (a recognized expert and speaker on Future Studies) Futures Wheel, we can work backwards to predict the cause. You see, to every ‘change’ there are ‘consequences,’ second, third, fourth, and so on. We can often see the consequences, (like waves that have travelled far and wide) but it is sometimes difficult to track backwards to the initial changes. This entire approach is intended to ‘see’ the future, but we are going to try to use it to ‘see’ the past instead. Let’s look at this current wave of ‘consequences’ and see if we can find the ‘cause.’

The consequence, within this case study, is the terror that is plaguing all of mankind, with the focus on the world’s hotspot, the middle of the Middle East, Israel. Let’s try and see if it is something intrinsic to Arabs in general; you know... the death and mayhem that has followed their existence throughout the last 12 centuries of Islam?

Maybe it has something to do with the beginning of Ramadan, the ninth month of the Islamic calendar. Ramadan began only a couple of weeks ago. It is the Islamic month of fasting, in which participating Muslims refrain from eating, drinking, smoking, and having sex during the daytime. This abstinence from physical pursuits is intended to teach Muslims about patience, spirituality, humility, and submissiveness to God... Well, considering that we should be seeing a heightened sense of social responsibility, this must not be the initial cause.

Here is another possibility though: Maybe the cause is related to the events that led to the latest Zogby poll (Arab Attitudes in 2011), which has revealed that President Obama’s ongoing appeal to the Muslim world has utterly failed. His speeches promised to restore America’s international reputation, but now the Arab world hates America more than it did under George W. Bush, who was dropping bombs on them. Now, since Israel is the first stepping stone to the West and happens to be located in the center of the Islamic Empire... you get my drift.

No, as annoying and stupid as this is, this last scenario is probably just another level of ‘consequence.’ I think we need to look further back. Actually, I learned that the cause could actually be a sort of Arab anniversary celebration of the Jerusalem and Hebron Massacres, which began on Friday night in 1929 (83 years to the day), before Thursday afternoon’s terrorist attacks in the south. The story goes that after the Arab neighbors went on a rampage, inspired by the Grand Mufti of Jerusalem – Hajj Amin El Husseini – and Hitler’s genocidal Palestinian partner, the bodies of the murdered Jews were laid out in a Jerusalem morgue for Shabbat. On an interesting side-note, upon entering the morgue to begin the mass burial at the conclusion of Shabbat, a small cry was heard. Shmuel, a one year old, had only been unconscious after having his eye gouged out by the frenzied Arab neighbors that had rampaged through the town, killing his mother and killing and maiming scores of others. The following day the madness continued in Hebron, while the British police stood by doing nothing, until the slaughter began to overflow to threaten ‘them’ and was stopped with ‘one’ bullet fired into the air...

Somehow, as plausible as this story is in explaining the cause of the current terrorist mad-dogs prairie-dogging their ugly heads up, I think it must be deeper than this as well. Let’s look into this week’s parsha, Re'eh (Deuteronomy 11:26 - 16:17), which means the command, ‘to see,’ and let’s just ‘see’ if we can shed some light on these shadows. Here, Deut. 13:2 - 4 warns the Israelites against becoming fryers (suckers) to ‘miracles’ performed by false prophets, "If there should rise up among you a prophet or dreamer of dreams and offer a sign or a miracle. And that sign or miracle should then occur of which he has told you, and he says to you, 'Let us go after other gods whom you do not know and worship them,' do not listen to the words of this prophet or dreamer of dreams because it is God who is testing you to know if you love the Lord your God with all your heart and with all your soul."

This sounds like the schmaltz to me... Yep, we are finally getting to that one. Schmaltz is made from chicken or goose fat, to keep ‘kosher’ laws by replacing butter or pork lard, which was the common method in Germany and Europe for cooking. Traditionally, Jewish cooking oils were always olive oil and sesame oil, but that was when Jews lived primarily in the Middle East and the Mediterranean basin, thousands of years earlier. Anyways, ‘the schmaltz’ is a good way of describing how the Jews stayed together for thousands of years as one people, keeping one set of laws, and adapting to their varied situations and locals, while still connecting to God every day in a tangible and meaningful way. If anyone started to follow a false prophet, the entire people could become fractured and fall into oblivion.

God (via Moses) even told us, in this very same parsha (Devarim 14:1-2): “Do not slash yourselves nor make a bald patch between your eyes for the dead. For you are a holy people to the Lord your God...” How does this relate to fracturing as a people? Yes, we should understand from this verse that we should not mutilate ourselves because of a loss, but the Sages see something else. In Yevamos 13b, it is written, “Do not slash yourselves — do not form factions.” And, not so coincidentally, this is exactly what happens when a false prophet begins to convince people to ‘see’ the miracle and ignore the ‘truth,’ ignore the Torah or change it in any way. This is why, way back in the 7th century C.E, when Mohamed was strafing the land seeking converts or killing everyone within striking distance, the Jews died by the thousands. Ultimately, the Moslems let the Jews live in a lowered status called Dhimmi. The Jews were strong as a people and held to their convictions, something that the Arabs respected.

There is an old Arab proverb that says: “When people see a strong horse and a weak horse, by nature they will like the strong horse. This ‘strong-horse’ view of power is dominant in the Islamic world, which relates back to Obama. He is considered a weak horse for bowing down and apologizing for American power. This is an affront to the Arab ‘strong-horse’ view of power and we are seeing the ramifications of this attitude all around us today. This, however, is still only a ‘consequence,’ not the source or the ‘cause’ of it all, but it is getting closer, don’t you think?

OK, so, let’s go back to the schmaltz. We already learned a bit about it, but now we need to sink down into the fat of it all; we need to learn how it is made… Step number one is to cut the chicken or goose fat into small pieces. Then you melt it inside a sauce pan over low to moderate heat. Oh, and one more thing; don’t forget to add the onions! Now, after the majority of the fat has been extracted from the goo-yummy concoction, you need to strain the glistening, melted fat through cheesecloth into a container to store it for all your later cooking fantasies. Now, the stuff remaining, wadded unceremoniously into the cheesecloth — the stuff you may be tempted, (because of its powerful odor) to throw immediately into the garbage outside of your house — is all the leftover brown, crispy bits of skin, onion, and whatever and this, my friends, is the gribenes…

The gribenes is the result of the cause — to create kosher cooking oil in a non-kosher world — and we can make interesting parallels with this to our dichotomous world of the physical and the spiritual. The spiritual is definitely the schmaltz, the stuff that goes on to live another day. The gribenes is, well... to put it plainly, both loved ‘and’ despised.

This brings us back to the feeling we get when learning a certain Midrash. It says that, as we approach the ‘End of Days,’ initially religions other than Judaism will be answered by God. Other faiths will prosper and seem to be on the path to the One, the Creator of the Universe. It will appear in the world as if the Jews had it all wrong, all along...

This reality will cause the ultimate fear in the hearts and minds of the Jews. It will be an awesome fear that burrows to the core of everything, becoming an ultimate test of faith in the Torah. In the end, Judaism will be vindicated, but this will be the true turning point for all of mankind. We will ‘all’ see, once and for all, Who runs the world.

There is another Arab proverb that says, “A falling camel attracts many knives.” Weakness, it seems, makes Arabs want to stab the falling camel. That means that bowing down, apologizing, or just being indecisive in their eyes is, essentially, a death wish. They are not going to stop and as we can see from the Midrash, it may appear to very intelligent people that they are correct when all they are really seeing is the leftover gribenes. The true ‘cause’ is our own ineptitude. The true ‘cause’ is our inability to stand together, as one race of Human Beings, and know Who runs the world. The schmaltz of it all is, we are all on the same boat, riding the same ride, living the same reality. Maybe if we just start to work together, we could actually accomplish something good, something right, something real. All I can say is, ‘If you want to ‘see’ the future, all you need to do is to ‘listen’ to the past and then DO something about it!

May Mashiach come in our time and during our days!