Inner Truth and the Maelstrom’s Gullet 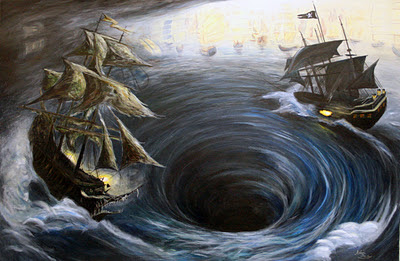 Quite often, when I sit down to write one of these blog entries, I swear under my breath, since my laptop is almost 10 years old and has become somewhat of a ‘hated’ machine. I purchased the thing from Costco (when they still had the return policy intact on computers), but ended up lugging it with me to Israel when I moved anyways. This computer has been through a lot. I used to strap it to my back, while pulling Cody, my three legged dog, in a Burley trailer behind my full suspension mountain bike (another antique that I still use) in Boulder, on my way back and forth to work at my custom cabinet shop. I never fell, but Cody did once. He tried to chase a prairie-dog and pogoed out of the trailer, but since he was leashed in with a harness, the trailer just flipped over on top of him. When I looked back, I thought he had snapped the leash and run away, since he was thoroughly hidden by the turtle-shell of a trailer, running along beneath the upended red and yellow thing that was now dragging along the ground on its aluminum safety bars…

Having visited the States recently, I was once again overwhelmed at the resources that are available. In Israel, it is just not the same. You can find anything and everything in the US! It is just so, so…, comfortable; and when I say comfortable, I mean the ‘sitting on a couch’ type of comfortable, not the satisfied kind. What? You didn’t know that satisfaction was a result of completion and not comfort? OK, OK, take the name Noah for instance; you know… the guy with the big boat, animals two by two and all of that? In Hebrew his name is Noach, which ‘means’ comfort. His wife’s name was Na’ama, which means ‘nice’ (Yeah, they were nice and comfortable, I’m sure!). The boat or Ark in Hebrew is called ‘Tevach,’ which is also a word for container, a controlled space that separates from chaos, or it can even mean a ‘word’.

Yes, words are also containers. Think about it. A word is used today to describe something, right? Well, how do we know what to call the thing we are trying to describe in the first place? If no one ever taught a person anything, a ‘rock’ would be named for its intrinsic qualities, as perceived by that person; the rock would ‘speak’ its name first, so to speak…

This is how Adam ha’Rishon (you know, the half man / half woman proto spiritual being) was able to name the animals. They all ‘spoke’ to him on a kind of spiritual level. He was able to see right into the genetic nature of each creature and the name of the animal ‘jumped’ out at him. This is all a great theory and everything; but, what I am trying to figure out is that when Adam named the animals, were they really animals in the sense that we understand animals today? I mean, how is it that the snake wasn’t slithering on and eating dirt yet? This happened to the snake only as a result or ‘consequence’ of attempting to fool Eve into having a fling with him, while Adam was reportedly snoozing in the bushes somewhere nearby. The snake, based on the consequences of his actions, goes on to be the oh-so-phallic, slithering, dirt eating, ‘extremely’ physical creature that we see today.

I guess I gotta bring in the heavy hitter, the Rambam, who explains that the animals in the Garden were humanoid in form, but with very specific animal traits. The ‘snake,’ therefore, must just have been another one of those Cro-Magnons running around with a club, I guess. Well, there is that whole, “Likeness of God” thing to consider here, right? "And the Almighty said, 'Let us make Man in Our image, as our likeness...' “(Genesis 1:26). This verse, seemingly, is about an 8.7 on the Torah Richter Scale of strangeness. I mean, how is it possible to say that a finite human being is in the image of an Infinite, Formless, ‘Everything’ Being?

Is it time yet? Yup; it’s time to bring in that whole... ‘levels of soul’ deal. "And the Infinite, Almighty, formed the man as dust from the ground, and He blew into his nostrils a living soul, and the man was life for a spirit" (Genesis 2:7). Human beings are a combination of a physical self (dust from the earth or a ‘Nefesh’) and a spiritual self (a soul or ‘Neshama’). The physical self was created from the ground, from physical matter or form that God had already created in the universe. The spiritual self or soul was "blown into" human beings by God Himself.

So, these “animals” or “Cro-Magnons” running around must have only had the first level of soul, the Nefesh. Adam ha’Rishon, and later on Adam and Eve, had both levels of soul, which explains the reason that God had to send Noah and Na’ama into a big boat-like container and spend exactly 365 days on the high-seas. The world was inhabited by Neanderthals and Cro-Magnons… running amok and challenging God with all sorts of nonsense, like Babylonian towers and cave-man technology (the likes that only Thomas Crapper’s mother would have appreciated!), murder, and emptiness. Mankind had united ‘against’ God. They chose the lowest valley that they could find, so as to not utilize any of the God-given hilltops or mountains to build from, and began their technological feat from bricks, not stone (for the same reason). Mankind had lost its connection to the Creator and the only reason for existence in the first place.

OK, back to comfort; maybe we can understand what comfort is in a different way. In Psalms 105: 3-4, it states, “The heart of those that seek God shall rejoice. Seek God and His might, constantly seek His countenance.” Yes, this is, apparently, a very comfortable position to be in, rejoicing in God, but it also sounds suspiciously like effort to me… Yeah, it definitely is; but, didn’t I already say that comfort wasn’t akin to a slacker on the couch, but success through effort? I read that Rabbi Simcha Zissel of Kelm stated that the above Psalm can be explained like this: “Spiritual quests are qualitatively different from physical ones. In worldly matters, a quest is futile if one finds nothing and the disappointment is frustrating (think tower to nowhere). Not so in one's search for God, wherein the search itself brings joy, for the very inquiry elevates the searcher!”

Noah, it seems, was named ‘Comfort’ for a reason by Lamech, his father. It would appear that his father knew that he was going to be the last man on Earth to know God... in a world that had utterly abandoned Him. Noah was named Comfort so that all the future generations could have the ability to feel the success of becoming aware of meaning, of becoming aware of our purpose, the continual search for meaning throughout human history, of our collective awareness of God; but, it isn’t until this very generation that meaning has been reduced to things like down-time, vacation, killing-time, physical comfort, and couch-time... Oy... ‘Killing time...’ Can you imagine what a dying man would give for just one more day?

Seemingly, we are living in a time where the Tower of Babel is rising rapidly in the world, bringing ever wider gaps between the generations, between individuals, between the right and the wrong, the Left and the Right, and the East and the West. Technological development has become so rampant that we can never get enough of the latest and greatest, since there is always the next big thing perpetually right around the next corner. And yes, our level of satisfaction with the latest and the greatest ramps off suddenly ‘exactly’ as we rejoice in our new ‘time sucker, space filler’ of a thing. I fear that our collective container, our Ark, has burst its seams and is beginning to let in the dark, murky abyss that has been swirling around us, waiting patiently for us to forget.

We, as in the Human Race, are being scattered to the far reaches of our collective understandings. We, as in the Human Race, have forgotten how to let the inner world speak to us. We, sadly, as our predecessors in Mesopotamia once did, seem to be progressively forgetting about our Creator, as we easily glide down the slip-and-slide gullet of a maelstrom of babble and ultimate nothingness. I guess maybe that my broke-down and hated machine is teaching me something after all. Maybe being comfortable is overrated. Maybe it is all written in the words, written in the containers of everything around me. Maybe it is all meant to be and I just forgot how to actually see into it, in order to name it with truth...