THE Tong, THE Sound Machine, and THE Lost World 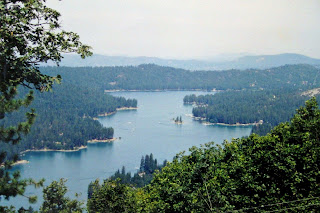 The word THE is THE most frequently used word in THE English language. I looked it up on THE internet. I thought that I might, just for fun, make note of THE wide use of THE word THE by capitalizing all THE letters in THE word THE that appear in this blog post. So, to get started, THE blog post is about an island in Sweden and, yes…, more. I saw a map of THE island THE other day that, when I peered into Google Maps to view it more carefully, caused my heart to stop for at least a beat and a half. It was an aerial view that some friends were showing me, friends that live in Sweden, but love Israel. They live in Malmo, which is THE same place that you hear about occasionally with regards to Muslim extremism, anti-Semitism, and Left-wing / Palestinian aggression 'towards' Israel. My heart skipped, because THE island reminded me of a lake that I used to visit when I was growing up, near Yosemite National Park, called Bass Lake. My father, you see, was really interested in building a family. He got a pretty good job, after serving in THE military and going to university, and in his long-term vision of THE untimely foreshortened future, bought an old cabin on THE lake there. We spent a few summers, much to my chagrin at THE time, wandering around THE wooded hills that extended behind it.

One summer, I decided to spend my time, of which I had plenty, building a path and a patio on THE leaf and pine needle strewn landscape out back. I actually woke up at THE crack of dawn one day, rolled available rocks up THE hill to use, and began to dig, only to stop short at THE abrupt discovery that someone had already been there, someone had already built it… what THE &%^$! It was like discovering dinosaur bones or something. THE more pine needles and ancient dirt that I cleared, THE more terraces and rock-hewn staircases I found! In THE end, instead of building walls and paths, I only discovered them while clearing them of 50 years of debris. Later, when my dad developed an interest in my discovery, I found out that THE Tong or Chinese Mafia informants had been harbored there by their lawyers, awaiting trial in San Francisco and that they, evidently like myself, had lots of time on their hands.

THE paths and staircases meandered everywhere, going nowhere. It reminds me, now, of a story by Roald Dahl called THE Sound Machine. I saw a Twilight Zone / Outer Limits genre movie about it once when I was young, but never really knew that it was a short story before. THE story starts with a guy named Klaussner, who is obsessed with sound. It unfolds with his theory that there are many, many sounds in THE world that humans are just unable to hear because of THE high frequencies involved. Klaussner, having built a machine to tune into those frequencies, attempts to explain to his doctor one day that THE machine will allow him to tune in and convert those high pitches into audible sound. THE doctor is not interested and thinks him a bit of a loon. Klaussner doesn't give up, though, and he tries THE machine out in his yard, where he cringes as he hears shrieking in his headphones while his neighbor cuts roses from her garden. Each time a flower is cut, he hears a shriek. Klaussner is intrigued and abhorred at THE same time, so, THE next day, he tries a bigger experiment. He turns on THE machine, puts on THE headphones, and swings an axe into a large beech tree. He is subsequently horrified to hear THE deep and pathetic moan that THE tree makes in response. Klaussner, wanting to share his discovery with someone, rushes back to THE house and calls his doctor again. "Please come. Come quickly. I want someone to hear it. It's driving me mad!" he says. THE doctor agrees to come over and listen to THE headphones, but just as Klaussner takes a second swing at THE tree, a large branch crashes down between them and destroys THE machine. Klaussner is deeply shaken and, in a moment of grief, asks THE doctor to paint THE tree's cuts with iodine. THE doctor claims not to have heard anything, but he agrees to Klaussner's strange request and dresses THE poor beech tree's wounds.

THE strange thing about this story is that everyone involved (and 'my' inner voice confirms this as well) is perfectly happy to have such a phenomenon go unnoticed in THE world. It just seemed to open up too many unanswerable questions… I mean, how are 'we' supposed to eat then? How will 'we' survive, knowing that we are causing such pain and distress to THE world, just to live? So, in our infinite ability to justify and ignore, we just move on… It is a question that we are unable to answer, a question that is out of our range, out of our vision, and we just turn the channel, pretending that such a machine never existed in THE first place. It is just like those staircases to nowhere, buried under years of dirt and refuse, somewhere outside of San Francisco in THE hills behind Yosemite National Park. I was so excited to find them, but at THE same time I was overwhelmed that I had lived and dreamed on top of them for multiple summers, without knowing a thing, without knowing how far they really went. I stopped uncovering THE staircases when I became overwhelmed by THE history of it all (actually, I think I probably just ran out of time) – I still visualize to this day… Chinese rail workers toiling in fear, as their lawyers debated inside THE screened lake house with THE ruthless Tong relentlessly searched for THE traitors that had run and hid among THE mountains.

I guess that we just have to move on and forget about THE pain sometimes, which is what I am going to have to do. When I saw THE island in Sweden, there was a split second that I remembered how I once believed that my parents would always be there for me.  You see, THE man that owned that island was given it by his parents. He was in a family business with them and they had a relationship, a real relationship... THE island was nothing special, covered in patchy snow and scattered, ramshackle out-buildings; accept, maybe, that it represented what I have somehow lost. My father died many years ago. He left THE cabin at THE lake to my mother. My mother decided to sell it at a tidy profit and, after she died, give what was left to her new, younger husband, as if those stairways to nowhere 'actually' went nowhere, after all. I know different now. Those hidden stairs and paths were created out of THE desire to be, THE desire to live. They represented THE world of action, our world. Those ruins were put there for me to stumble upon, if only to give a voice, however small, to their builders. Now I just need to remember them, remember that they existed. THE cabin by THE lake is gone now, just like Klaussner's machine. Now… THE nature of THE thing exists 'only' in my mind and I have to remember.  I cannot forget that THE entire Universe is made up of waves and particles, including me. But, even more important, I cannot forget that I am more than just that, I am alive for a reason, I exist, if only, to ask why.