Mouthing the Words and Babbling Towers 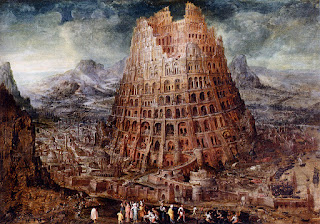 When the ball drops, do we really care? In that specific moment, when the drop-sound reverberates off of our self-awareness, we seem to be so engaged with our own expectations that we 'literally' convince ourselves that it is of utmost importance to pay attention, but we don't... We just say, "We did!" and then come up with a 'really' clever excuse to ourselves as to why we had to 'understand' it after-the-fact. That is living, but it seems that it is a not so much of an 'in the moment' type of living...

As a case in point, for the last few months, I have been overwhelmed with the atrocity that continues to exist in the world, but have utterly 'refused' to acknowledge it… inwardly, that is. In Syria, for instance, the dictatorial government has recently waged an 'unrelenting' campaign of arrests and murders that has consumed tens of thousands of human beings, humanitarian aid volunteers, as well as most of the men and boys from the towns that the Syrian Army has taken upon itself to besiege. I think that I saw the border of Syria, just last Friday, while rafting down the Jordan River rapids. It looked peaceful enough as I bounced and laughed down Lebanon’s runoff, but I knew, deep down inside, that right on the other side of my line of sight, just above the tree line, death and mayhem was raging on, unchecked by anyone, including me. Last week, as another case in point and if you are to believe the news reports, Iran evidently degenerated to declaring war against the entire Jewish people – and Egypt was accepted as a Muslim Brotherhood State by the West, after which it promptly declared an ideological war against the Zionists (read Jews here), regardless of the words being mouthed to the West and regardless of the collateral damage to the Human Race that is looming on the horizon; and, in the West, even The Color Purple has poked its liberally regal head above the clatter of chaos to side against the Jews, once again, to side with the fury of darkness and its love-child, the inevitable decline of the human condition, guised as equality for all and to all a good night.

Phewww… I think that last week, instead of finding my happy in-the-moment place to dwell within, I ignored the world (and my true-self) in the process of seeking that very same place! I took a deep breath and changed my mental subject. I mean, “How can I do anything about it. We humans seem to know it all, don't we? We seem to have it 'all' covered, until the boogie man, the very same demon within, the Shayde of fireside yarn, reveals its maniacal mange and reverberates hatred and gut instinct across existence, across the Earth and in a flash of would-be regret and ignorance, the boogie man turns its eyes inward, revealing the true partner in crime, the true reason for 'our' collective mellifluence… the proverbial 'me.'

Balak (Numbers 22:2-25:9) is upon us. We are now faced with that unbelievable essence of miracle, smack in the kisser; the donkey’s kisser, that is. Are you familiar with the tale? No, not Shrek (but that is a good one too), I am talking about Balaam, as he ignores the dimension that gave him a say in the world, the spiritual dimension and the unknowable dimension of Hashem. Balaam is an interesting word. It means: Be = In – Lo = No = Am = People. In other words; Balaam was of no people. The text itself says that he is from the land of his people by a river, but does not make claim as to where that is. The commentaries claim that it is the land of Ammon (you know… the capital of Jordan?). Jordan, although there aren’t any recent consensus figures to consult (that I could find), is estimated to have at least a 75 percent 'Palestinian' population today. What is a Palestinian? A Palestinian is a descendant of the immigrants to the land of Palestine (renamed by the Romans 2,000 years before) from mostly Turkey and Egypt during the 1800s and early 20th Century.

They came for the work, you see. I suppose, if the Syrians today could cross the border into the Promised Land, they would be coming in droves to get away from the atrocities over yonder, kind of like the Somalians have been over the last few years. You know what has been going on in Somalia, don't you? Well, let's leave that for another time. They are coming through Egypt, which is shooting them as fast as they can, and crossing the Negev Desert  and the (currently) non-existent fence in that region. Are you reading between the lines yet? That, my friends, is the reason we are here. We aren’t just supposed to take things at face value; we are supposed to delve deeper into the realities that exist 'here,' between the lines, which brings me to the fate of the Jewish nation.

If the Jewish Nation, we learn from the actual lines themselves, abandon God (specifically described in Leviticus 26, Deuteronomy 28:15-68, 29:17-28, 30:1-10, 31:16-21, and much of Isaiah and Ezekiel, we see that most of what was forewarned has,  throughout history, actually occurred. The Torah states that the Jews will be thrown out of their land, that they will return, and then they will be thrown out again. The Torah then foretells that the Jews will come back to Israel, much, much later: Enter the Jews of the 18th, 19th, and 20th Centuries. Well, let's not forget the 21st Century either… And that is not to say that Jews haven't been living in The Land throughout history, because they have.

This brings to mind another interesting story of old yore, the story of Migdal Babel (the Tower of Babel). Am I babbling yet? Let's just break this one down a bit. We think of language as a way of verbally describing the world that is already around us, but it is something entirely different. Language is the process of bringing into physicality, into being, the inner essence of what was always there. Language fixes the ephemeral in time and space, making it static. By speaking a word, our perception of that thing that we spoke becomes real. Before that, it was an infinite possibility. Before speaking it, that word had ultimate potential and could be anything at all. After speaking it, it was fixed and stuck exactly as it was spoken. The Migdal Babel was built during a time when words were more than just syntax and grammar. The Migdal Babel was built when words were spoken from the inside out, not the other way around like today. Those speakers created as they dwelt and built their tower. The problem is that they attempted to create a power-grab (if you will) from Hashem. So, since that didn't really fit the Creator's plan so well, He took away that ability to create with words, leaving us with an extremely pale and hollow version of language. Now we have to label things with words like, 'discovery' and 'explore.' These are the words that admit our ignorance of the truth. These are words that make me want to cry over the loss of all the infinite potential. These are words that even make me want to SCREAM at the idiots calling the Higgs boson particle the god particle. Haven't those geniuses ever read Ramban…?

I guess I am babbling again…