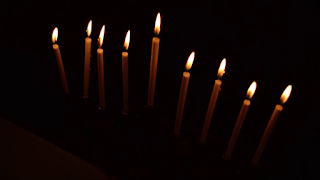 In the real world we dream. In the dream world we create with our legs spread wide across a chasm of despair—at least perceived “despair;” since, after all, in reality it’s only a dream. The first dream that I remember … was a repeating dream that happened over and over as a child, but repeated itself throughout my life as an adult, as well. Back in reality, as a young teen, back in Laguna Beach, California, we would gather at the mouth of a drainage culvert next to our Little League baseball field with candles and matches. The concrete pipe was only a meter and a half high, so … being the tallest of my compatriots, I had to duck the entire way or else scrape my head on its top. They later installed a pirate jail-door type of grid over the entrance to our underground maze, but back in the days of my youth we were free to roam the tunnels there as we dared to do so. Flashlights had already been invented, but we were young and batteries were expensive … so we used candles instead. Hot wax would drip onto our skin as we descended into the concrete tunnels, causing brief discomfort and collective grins after conquering the temporary pain from wax burns. We descended beneath streets and parking lots. We descended below earth that had been installed after a canyon had been filled to create usable land, covering an inland waterway where sailboats had once moored and skipped about. The mall that was built above us was called Boat Canyon, for just that reason. As we traveled the tunnel’s length, we passed feeder pipes that were too small to enter, dripping water that pooled down to the larger pipe’s trough at the bottom. The entire way we had to walk spread-legged on each side of the tiny stream meandering down its center, or get wet-feet and have to return topside asap. We continued through the darkness, all the while attempting to visualize the real world above us, and where we were. At some point, off in the distance, we could just make out tiny streams of sunlight breaking down the darkness that was candlelit around us; so, eagerly, we continued on…

The stark depths that we had journeyed only solidified the answers we sought, which were just under the surface of our ‘real’ thoughts … waiting to open and to blossom unto the world. I’ve seen it first-hand as my eldest son, then only three, sprinted to the front window of our suburban home in Boulder, Colorado, emanating the sounds he had heard from a passing garbage truck … Bbbrrrerrr … bbbrrrerrr… and with naked abandon looked at the machine that changed his world view, or, no matter … meshed into it with ‘perfect’ precision. I’ve seen it as the shuk salesman, in the Arab quarter of the Old City in Jerusalem, came out of the backroom smiling, wearing an Ivy League hoody ready to bargain in English on a really bitchin lighting fixture that now hangs over a semi-mural covering my kitchen cabinets. And … I’ve seen it as I’ve read the words that have been handed down for generations, for thousands of years, from a time that has been so removed from our daily lives that it has been launched into the realm of dreams and of nightmares for all ‘practical’ purposes; in the Torah.

As a young teen I had many problems with societal norms. My legs had been casted and braced for Osgood-Schlatter’s disease for years, causing me to separate from the world at large. I was incapable of team sports. I was shunned on the playground. I was labeled a freak. So, when I found friends that accepted me I found that they were all younger than I was—which is one of the reasons that I was the tallest as we explored the tunnels under Boat Canyon. The next canyon over was called Laguna Canyon, and there resided the Boy’s Club, an after-school hangout with a gym, a woodshop, and other meeting opportunities for young teens. Mostly I loved hanging out in the woodshop, but my father was a college basketball star and wanted me to play too. My brother and I joined the league and did our obligatory team sport. We sucked, for the most part. I was always the tallest, so always put as the Center. This was the time just before my Osgood-Schlatter’s kicked in, so I was unable to use that as an excuse for my incompetence as a basketball star … which, actually, caused me to rebel and to seek attention in other ways. I became a ‘problem child.’ And … the principle of the Boy’s Club became my nemesis, and I his. So, as it turned out, a lifetime of reliving, over and over, my revenge upon the principle of the afterschool became my subconscious feeder-tube. I emerged from a manhole and lobbed a hand-grenade at him. He exploded, but then morphed into a gazillion tiny versions of himself, which I then tried to squash underfoot. Eventually, after saving many of my younger compatriots as they were overwhelmed with the gazillion tiny principles of the afterschool, we ran away back to the safety of the tunnels below.

The tunnels always lead downwards, to the open expanse of the Pacific Ocean. The way led us under the mall that was built upon the canyon of boats, and we passed manholes letting light in from above. At each vertical pipe junction there was a maintenance ladder installed that would allow workers to descend into the tunnel we now traversed. We crisscrossed against traffic, as all ‘young’ teens should, and ascended the ladders, catcalling and finger poking through manhole finger-holes at passersby. Rarely would we hear a response, and more often than not we would recoil as a passing car would threaten to smash our fingers poking through the manhole cover-holes, just like white worms expressing existence to the air above. The water in the bottom of the tunnel became thicker as we descended downstream, with moss and debris collecting at its edges. The sound of traffic overhead became a distant memory as we inched our way downwards, deeper and deeper into the backfilled and artificial earthen tomb. The worry was always that we would run out of matches, or our candle would go out and we would be left in utter darkness. There was an extra-long expanse as we tunneled under the Pacific Coast Highway, and we all feared the time we’d spend completely isolated from the universe there. All we had, then, was each other. The candle-glow on our faces was theatrical from the bottom up, causing adrenaline to rush at every glance. The path was long before us, and after, with no light in sight, but we continued on in spite of the younger one’s protests. I was the tallest, so I went first, ducking, hopping, and skipping as I went, hot wax creating abstract sculpture down to my wrist. I was the first to see the light, but not the first to boast of its existence. The tunnel was coming to an end, and the ocean waves began to resonate around us and bounce off of the tunnel walls … Wwwishhhhwaah, wwwishssswaah… We emerged from the concrete tunnel and stepped onto the warm sand. The ocean stood before us, as if waiting patiently the entire time. We emptied out into Diver’s Cove, a place I knew intimately from snorkel adventures and blowhole diving. The sea air drove its way into my lungs and I breathed a sigh of gratitude for all that existed in the world. It was ‘truly’ the beginning.
Posted by Doronoll at 17:05
Email ThisBlogThis!Share to TwitterShare to FacebookShare to Pinterest
Newer Post Older Post Home