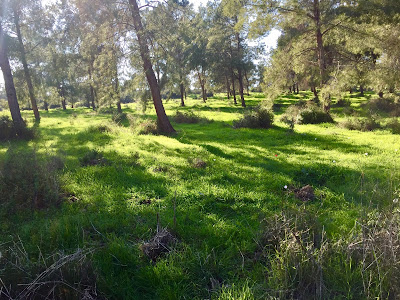 Through ruins from not too long ago, I descend into a glen daily on my way to teach. The way leads me past an Arab artifice now destroyed, Christians who built a mosque for visitors now gone. The way leads onto a path between cacti, grown to each side and interspersed with carob, straw, and incense. Oak sings down below, I always know, as I walk down step over step to the work I’m learning to know; but … this time was different. Tingles I felt from the sides of my path, tickling me along arms, cheeks, and brain. Something was different, something was wrong. Looking down I saw nothing, looking down there was nothing to see; just tingling in my mind. My sense and learning said spiders, but nothing was to be found. I wiped the sensations away each and every time, but remembered it to teach as I finished walking down to my new norm, that morn.

Arriving at school I met students willing themselves to learn, and spoke of my walk down to school and said more, or less, not too sure. For, I realized what it was that was tickling my head. In my educated mind I said spiders, but deep down I knew. I told the story to my students who all stopped to listen, and at the end of my spin I told the truth of what happened. I knew not what occurred based upon reason. I knew that what happened was a break from the norm and a step forgotten. What I found on my path helped me to understand about living, and it tore more. I told my students what it was that I felt, I told them and then stopped talking and looked all about. The class then paused as I revealed the truth of their wishes; the classroom stopped when in truth I said: fairies.

We laughed, one and all, of course, but each of us knew that a truth had been spoken. So, I left that afternoon wondering about many great things. And, the very next day I took the same path, down through the ravine. Walking, I wanted to see if it was only me or just in my mind from the beginning. The tingling started sooner, I noticed as I strode down, like they were all waiting for me to cross the same path—nothing to see, as was expected, so I questioned it all the way down to the very bottom—where ancient ruins abound. The longest active spring existing in the land, with water welling up from the ground, exists in this specific realm. I walked down, like every other day, to the bottom where I found a tiny beetle on my thumb. It looked up at me, I could swear, as I freaked and flicked it like a hitchhiking ghost never once being.

I kept this to myself, up until now. But, later that day I walked home from work on the path I felt from the morning. I forgot it all until I saw what reminded me of a new norm. Step over step I ascended from the Hellenist ruins at the bottom of the hill. I passed the cave that sprung the spring I drank from on occasion. I U-turned quickly on the stairs under a carob. I passed, after turning again, the skeleton of a stone bird cage in ruins. Columbarium drawings to show what was once there. Up the stairs. Then from the sides of unknowing, they came together in rows. A parade ascending with me over a path I now know, NO! But that little blip is only in my head—beside me on all sides fluttered creatures singing the way for us all. I smiled. I laughed. Smiling up the hill I watched from each side as tiny faces sang—flying with me up the hill. Flutter-byes sailing with me. A rainbow of living … with me up the hill. Fairies.

Posted by DTNoll at 22:27
Email ThisBlogThis!Share to TwitterShare to FacebookShare to Pinterest