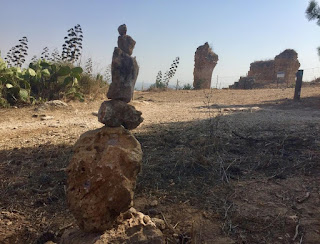 It’s moving so fast, damn, sailing past me as I run to do its bidding the whole day long. It’s as if my head was not my own to hold onto, while standing in an alley in front of my house; where a conversation ensued about construction planning. With my head already hurting from trying to squeeze coronafied students into a form that had already come, the English with my wife was the most familiar thing to grab. Hebrew flew in hesitant spurts between the four of us, a Christian, a Muslim, and two Jews pretending to belong. Arabic poured out into cement bonding the air between them … and a plan was formed. But, my head was still flying overhead, not mine at all. So I left to walk to work through the ancient ruins left behind. Past the sparkling white tower, evil lurking inside, I kicked through the gate leading down. A new sewer had also been planned, so diggers pounded in step with each footfall descending, each step stolen from a world gone wrong. Guilty for leaving my wife home, I thought about how to mold young coronafied minds into healthy beings to lead the way into a future unknown. I thought about my own sons singing a life of their own. And, I thought about myself and the path that I’d shorn. I sang along walking until I found it, a place needing attention, a place to be born. 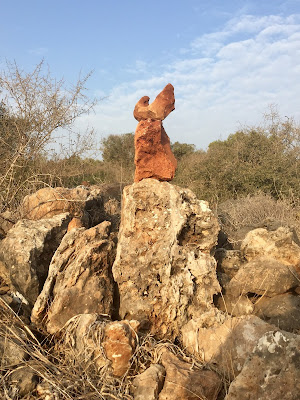 There’s a certain shape that speaks to me, a shape that elevates the world and defies gravity at the same time. It’s hard to give over the idea of what I’ve seen, but to try I could say that there are edges unworn. In everything we see, whether up, sideways, or down, there’s a pattern of being, and all at once being born. The rocks strewn about have been sewn by a heaven unyielding, with time filling in between and stretching out into our norm. A chip here and a roll-down there, dirt uncovering and then spilling out guts of the world, the stones tumble down. So on the path I move upon I stumble down, looking and waiting for inspiration born, on my path to work well shorn. Breathing deeply and stopping time, I find one or two stones. A base emerges from beneath the brush and then stones reveal themselves one at a time. Into my mind I eject myself as my ego rips out tendrils undone. I move silently into a realm without me being strung. Plucking my cords and tickling each string, my song then erupts into one. Time stops for a moment each time, and I lift my life up to gather up strength to sing down. For, the world beckons each moment and then it moves on. 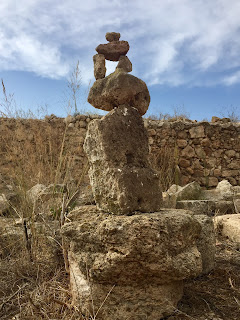 Down into the glen I weave my mind, stepping down with each grin I sing to the world all around. A fountain spurts out from the ground there, water living and moving down, sound all around; trickling down. Canals have been opened and dug in, letting the water move around, dropping into a world unknown, and eventually disappearing into mind. And, I follow it all back to work, where minds open wide to receive the next world coming down. Yes, coronafied minds only need moisture to bloom, and to blossom into one. We are all looking back as we think about now, but the future is growing always more young; everyday it becomes. The cacophonic cultures that I witness all around only inspire me to build. That’s the world we all know, a place where anything is possible and everything is undone. We live in a world where life lives in every moment but will never be won. We live to begin and to end, a life to be lived and a life forever worn. Like a coat with many colors or a grey one that shone, life is a gift from the heavens beyond. We live to have life and that is all that will come, nothing exists beyond. So live on and on, until 120; we believe will be won, until ... we all are witness with One.

Posted by DTNoll at 20:58
Email ThisBlogThis!Share to TwitterShare to FacebookShare to Pinterest