The Atlantians Did It! 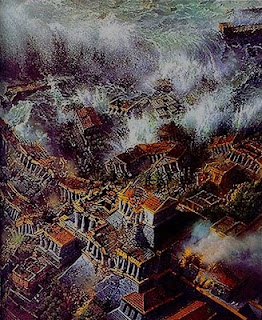 When we look around the world and see the ever decreasing space that separates continents and cultures, it is quite evident that something batty is going on. I mean, are we living on the Moon? Maybe for clarity purposes, click here to read a blog by Alan Dershowitz that illustrates the issue quite well.

It kind of seems like we are grabbing at straws in order to explain what is happening in the world. It makes me wonder, was it always like this? When the Romans took over the world, did they blame all their problems on the Jews? What about the Greeks, the Byzantines, the Moors, the Spaniards, the English, and the Germans? Now the Jews are even blamed with Global Warming by the Cult of Environmentalism?
I guess the thought is that, if a civilization has been around so long, virtually unchanged in terms of its moral, ethical, religious, and cultural, characteristics; it had to have had something to do with all the problems that the world now faces. After all, the Jews have been there through it all, since the beginning. The ancient cultures that were in the world when the Jews first came on the scene were peoples like, Ancient Egyptians, Persians, and Babylonians, who have since become Nomadic Arab and Farsi Tribes roaming the desserts, until about 800 years ago when they became Muslims and only in the last 100 years have they become the City States that we see today like, Iran, Iraq, and Egypt. The Jews have always maintained their Jewishness, regardless of whether they lived in Ethiopia or Russia and all came from the same little people, smack in the middle of the world (look at a world map some time for Jerusalem).
I am sure you have all heard of Plato, the ancient Greek philosopher. He was the first to write about Atlantis (which in Greek means, ‘Island of Atlas’). The legend began that one of the fabled Titans of old, Atlas, lived on a land bridge that connected Africa and Spain and tended a magical garden there. The monster slayer, Perseus, was the son of Zeus and Danaë and after killing Medusa and slicing her head off, set out to where the Sun sets, to the west. As the story goes, Atlas the Titan would not let Perseus rest in his garden, for fear of having his magical golden fruit stolen, and refused to be hospitable. Perseus, tired and cranky after his long journey, showed Atlas the head of Medusa, who we all know turns anyone that looks into her eyes into stone, and the mammoth Titan, Atlas, transformed into a giant mountain; his hair becoming a great forest, his shoulders into cliffs, and his bones turning into solid rock. The Titan slept there until Hercules, who a little later in our story, was in the process of performing the twelve labors, had to cross the mountain that was once Atlas the Titan. Instead of doing the sensible thing and climbing the titanic mountain, Hercules split it in half with his indestructible mace. This is how Hercules formed the Strait of Gibraltar and connected the Atlantic Ocean to the Mediterranean Sea. He left behind the remnants of his impatience, the Rock of Gibraltar in Spain and Monte Hacho in Africa, and ever since then, they have been known as the Pillars of Hercules.
What Plato wrote was that a civilization that existed "in front of the Pillars of Hercules" and had conquered many parts of Western Europe and Africa, after trying and failing to invade Athens, sunk into the ocean "in a single day and night of misfortune." There have been many Atlantis seekers since then, as the Atlantians were rumored to have great technology and treasure. Over the years, historians have mostly held Atlantis as a myth; however, most historians also conclude that if it existed at all, the precise date of the destruction of Atlantis would have been in exact parallel with the ending of the Pleistocene age or the last Ice Age. This is when the mountains known today as the Andes in South America, the Alps in Europe, the Rockies in the United States and Canada, and the Himalayas in Asia, geologists tell us, all became much larger in a short period of time. It is also the age that most of the large mammals such as the hairy mammoth, wooly rhinoceros, and sabre-tooth tiger became extinct. At this time, the American Anazazi Indians that were a great civilization, building cliff dwellings all over the South West mysteriously disappeared. In Europe, prior to this there had been a steady trickle of Cro-Magnon Man into the Hinterland and they mysteriously stopped then as well.
One other thing... Archaeology tells us that the paleolithic period (old stone) was followed by the mesolithic period (middle stone), which was then followed by the neolithic period (new stone) which was finally followed by the bronze age, iron age and, you get it.... Paleolithic peoples used crude chipped stone tools. Mesolithic and neolithic civilization introduced pottery, weaving, domesticated animals, and agriculture. Usually the transition between these different ages was fairly smooth and non-abrupt. But the transition from paleolithic to mesolithic was immediate and abrupt and it was abrupt everywhere there was civilization. No one knows why but we do know when this strange worldwide cultural revolution occurred. Yep, the same time that Atlantis sunk to its watery demise.
Are you getting the chills yet? If not, don’t worry, then you are probably a sensible human being that weighs things rationally before making a judgment that could affect who-knows-what and you-know-who. If you did get the chills, then... um... I love you too!
Shabbat Shalom!
Posted by Dnoll at 21:53
Email ThisBlogThis!Share to TwitterShare to FacebookShare to Pinterest
Newer Post Older Post Home