How to Understand Man and His Ego 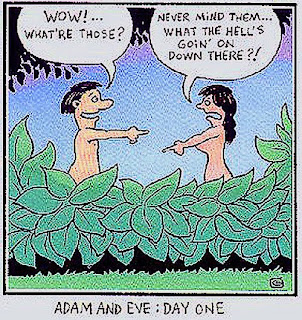 In Genesis, it says that G-D uttered only one thing to Adam before both Adam and Eve ate from the tree. He said, “You may certainly eat from every tree in the Garden, but from the Tree of Knowledge of the difference between good and evil, you shall not eat from it, for on the day that you eat from it, you will certainly die.”

G-D didn’t say a word to Eve about it; however, Eve knew that she should not to eat from the tree when the snake asked her about it. She told the snake, “But of the fruit of the tree that is in the middle of the Garden, Hashem said, 'You shall not eat from it, neither shall you touch it, lest you die.'"
This is how we know that Adam made up the part about ‘touching’ the fruit when he told Eve about it and when Eve touched it, she saw that she did not die, so naturally she ate from it. Adam saw that Eve did not die and he also ate from it. That is how we know that the first time that Mankind made a mistake was because Adam attached his own little white-lie and exaggerated for the benefit of his ego. He had begun to create his own worldview, instead of relating to G-D’s worldview, connecting him to Hashem, and now... mankind is constantly fighting to stay above the proverbial floodwaters. I wonder... would we be in the same predicament if Eve was created first?
Sorry Guys... It was bound to come out eventually anyways...
Chodesh Elul Tov and get moving on repairing that connection with Hashem!
Posted by Dnoll at 19:22
Email ThisBlogThis!Share to TwitterShare to FacebookShare to Pinterest
Newer Post Older Post Home