Dreaming of Zombies and Vertigo Paradox 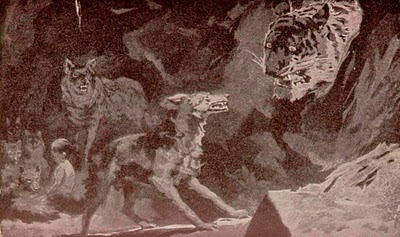 The night of Motze Shabbat (Saturday night), I had trouble sleeping. All night long the dogs in the neighborhood were barking and yelping. Once in a while, I could also hear the calls of the jackals that run in packs in the wilderness near my house. Something, it seemed, was not quite right in the neighborhood. Eventually, after finally falling asleep, I woke with a start from a dream into which I had descended. It was a gruesome dream, a dream that scared me wi

de awake in the dead of the night. When I sat up in bed, there was a silhouette, still afloat in my subconscious mind, of a zombie ripping the flesh from a woman’s neck with its pointed yellow teeth. In the dream, I had been trying to save her and her family from the raging creatures while driving like a bat-out-of-hell, screeching around corners, looking for other people to help escape the zombie mobs. The front cab of the pickup truck that I was driving had been organized to accommodate as many people as I could fit in and I remember wishing that I had the shell on the back of the truck to protect the survivors that were clinging for their lives there. We raced into the night, plowing right through the mad creatures, headlights glinting off their ghostly faces, as they flew to either side of the pickup truck, screaming laughter like stalks of shriveled corn in a farmer’s field.


Once I awoke, I tried to calm down and enter a new, more rested sleep phase, but the dream kept coming back, time and again. Then, in the wee hours of the morning, when the recurring dream loop finally stopped, I began to dream of a house on top of a mountain that my wife and I were looking at to rent. The real estate agent showed us the amazing view out the back door and I noticed a path that lead down the cliff-face from the deck that perched over its edge. I couldn’t help myself and began to explore its depths, climbing down the rickety ladder. The path was slippery and unsafe at the bottom, so I decided to return, but when I started climbing the ladder, I became gripped with a paralyzing fear. I clung to the ladder, as it creaked and pulled from the rock face with grinding acceleration. I looked down into the bottomless chasm that I was precariously hanging 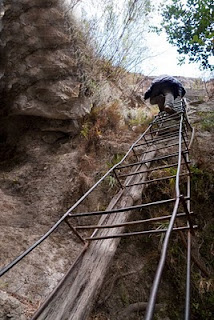 above and the whole image began to spin and go out of focus. I shut my eyes, willing myself to climb. Slowly… I ascended the rickety ladder, still creaking and pulling from the cliff, until, at the top, I was hauled by my shirt and shoulders over the upper most edge of the cliff face and sprawled onto my belly. I groveled some and then slowly crawled into the house, rolled up into a fetal ball on the hardwood floor, and wept.

Once again I awoke with a start, as my dream sobs translated into a sense of breathlessness. Usually I don’t have such lucid dreams that I am able to recall so vividly in the morning. Maybe it was something I ate on Shabbat. Maybe it was work stress or something like that. Or… maybe it was something that was meant to mean something, something I should listen to and interpret into my life somehow... I do remember that upon awakening, I immediately recognized character traits from inside my ‘dream’ state that are very much alive and kicking inside my ‘awake’ state. According to Hirsch’s commentary on this week’s parsha, Vayishev, he states that, “Our Sages speculate about whether there is any significance to dreams (Berachos 55a) and conclude that Devine Providence uses this half-conscious state to plant thoughts in a person’s mind and thereby to devise a whole series of events.” So, what events should I be pondering based on my relationship to zombies and vertigo anyways? I have had experiences with vertigo, like when I had to crawl along a knife edge ridge while climbing a 14,000 foot peak in Colorado. Or the time when I got stuck on a scissor lift, swaying back and forth 30 feet in the air, while rigging for an art exhibition at the Museum of Contemporary Art in Los Angeles.


I haven’t, as of yet, run into any zombies (other than my boys on occasion after too many hours playing World of Warcraft on the computer!), but I have had the opportunity to sacrifice my own safety in order to help others that were in danger of drowning under the rapids of a river in Colorado... um… but, I’m not going to get into that, since I was the one that put them in danger in the first place, so it is a bit embarrassing ‘and’ it doesn’t really count... let’s just say that the more I think about the back to back dreams that I had, the more I realize that they were connected. Even though they represented completely different scenarios – in the zombie dream, I was the hero… sacrificing my own safety to save others from a world gone mad and In the mountain-top house dream, I had to rely on others to save me from my own irrational fears, to save me from myself – what I learned is that we all have a responsibility to care for each other ‘and’ to care for ourselves. We spend so much time on one end or the other that we never really see how interconnected we all really are. We are one human race on one planet, our spaceship flying through the vacuum of outer-space. We don’t know where we came from and we don’t know where we are going. All we know is to either embrace the paradox of life or not to. All we can glean from the world is that there are many ways of understanding ‘who’ and ‘what’ we are; and at the same time, we know that we are all human, one species, one organism, with one purpose: to understand ourselves on whatever level is possible, individually and as a group, just a little better when we finally ‘arrive’ at our destination then when we started out on our journey.

We are instructed by the Sages to keep one piece of paper in each front pocket. On the first should be written, “I am but dust and ashes,” the words of Abraham in Genesis 18:27. On the second piece of paper should be written, “The world was created for ‘my’ sake” (either Sanhedrin 37a or 38b depending on which source I looked up). The trick is to know when to reach into which pocket. Each of us share being human, yet each human being is completely unique, possessing an absolutely unique combination of traits and circumstances. There is one thing that brings the two extremes together though and this one thing also lets you know which pocket to reach into – humility. This is the one thing that transcends the paradox, making these opposite ideas whole. By both believing that I am only ‘dust and ashes’ and understanding that the world was ‘created’ for me by Hashem, I keep my ego in check. Rabbi Noah Weinberg once said, “The higher a person becomes spiritually, the more humble that person becomes.” I would humbly add that, ‘In life, the more humble a person becomes, the more ‘whole’ that person becomes both in this life and the next one too. Yeah, there is a next one (actually more than one), but I will leave that for another time. 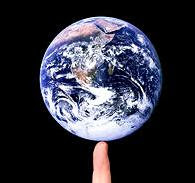 So, the next time you find yourself falling from a mountain or fighting vicious zombies to the ‘oh-so-gruesome’ death, just remember, ‘you have a choice how to view your predicament and in every moment that you exist on our little blue spaceship, you have a choice from which pocket to pull yourself: ‘I am nothing’ or ‘I am everything, but nothing compared to Hashem.’ I have it on good authority that they are both excellent places to be in!

Embrace the paradox baby... and have a good week!
Posted by Dnoll at 21:02
Email ThisBlogThis!Share to TwitterShare to FacebookShare to Pinterest
Newer Post Older Post Home