The Rorschach Underbelly under Our Noses 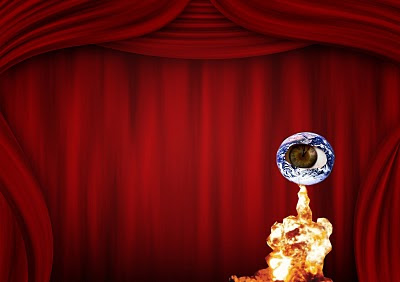 When the latest round of Middle East peace talks began… again…, I thought to myself — hmm… what’s happening here? There isn’t any ‘peace’ on the horizon that is any different from the last time the sunrise set over the evaporating ozone rainbow. These supposed ‘talks’ are just the usual talking heads of state, desperately trying to reflect the rainbow that had already disintegrated into tiny holes left from the secretly squeezed blackheads that now pock the night sky. When the interviews and commentaries began to dribble out of the sides of their mouths, I knew (actually we all knew) that it was only a charade of flimsy tinsel set design, intended to lull us to a deeply disturbed sleep. Yet, we all slogged forward; we were hopelessly hoping that it would become the normal daytime drama TV show that it conjured itself to be, definin 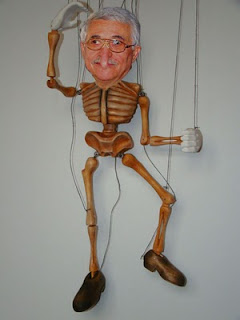 g and refining our intellects with smooth jazz, scratching out of elevator speakers, buried somewhere beneath the acoustic panels that we wore as a hat. You would think a saying like ‘under our noses’ would mean ‘it was so obvious that it was impossible to see.’ I mean, it seems to me that we just couldn’t stomach inhaling even a whiff of the fecund puppet show that was desperately trying to become a real boy, all the while dodging the mucus dripping from beneath the collective shadow of our frantically snivelling noses.

It reminds me of Pharaoh in this week’s parsha, Shemote (Exodus 1:1). Where was that guy when his daughter scooped up a ‘Jewish’ child riding in a tarred little basket, bobbing down the Nile? Pharaoh’s daughter even called the child Monios, the Egyptian word for ‘withdrawn from the water’ (Moses in English). I mean, where did Pharaoh think his daughter’s new son came from, squeezed from a pimple on the crocodile god’s chinny-chin-chin? When Moses was a tike, you know that every time Pharaoh yelled at him to clean his room, it went something like this: ‘Hey Monios! (Name translation = Jewish kid pulled from the Nile while I [Pharaoh] was tossing them in by their ankles upstream.) Get in here and pick up your little idols before I step on them!’ Not only his name gave away his origins, but every time that Pharaoh saw the little stinker getting his papyrus diaper changed, he had to know that Moses, the circumcised within the womb Jew, had been scooped from the Nile by, according to the Midrash, the first Inspector Gadget-Gumby arms in history when the princess’s hand maiden reach

ed out to snatch the floating child from certain death in a hand basket. Pharaoh must have been too busy throwing Jewish babies into the River to notice. That is all I can think... Kind of like us, I guess, listening to elevator music emanating from our stylish and ‘oh-so in-fashion’ acoustic panel hats... The puppets are dancing on the stage in front of us, their noses growing into wooden clubs jockeying like swordsmen, while we sway to the metronome of desire and disdain, and the band plays on with spora

dic out-of-tune bleating of the cornucopia of consumerism, honking comfort from a psychedelic pastry tube.

What, you didn’t notice? I think you did... We are all so busy with the things that we ‘think’ we have control over, we just let the show go on around us. I mean, how can I change the world? It is way too big to comprehend how to overturn that wrecked semi-trailer of humanity that landed in the middle of my driveway, blocking my access to everything that I define as ‘Me,’ so I will just go around it and let the grinding metal and plastic spew out smoke and steam until it disappears from my mind’s eye. Eventually it will be consumed by the landscape that I perceive all around me — I will even wonder, one day, just how it got there in the first place. Of course there was no driver... it 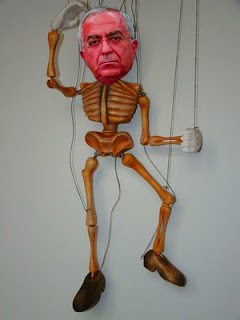 was just how the world was made... and I am wasting my time thinking about it, so... back to the grind...

Now, while ensconced in my cocoon of grind-mode, I can safely wonder if Pharaoh knew that he was hedging a midlife Middle East crisis, a crisis that gave birth to them all. I can wonder if he saw it coming. I can wonder about how it all has been brewing and stewing, growing a hot air conscience and is now becoming calamitous, ready to POP, or so the talking heads tell us. I can even wonder about why, meanwhile back in my driveway, I am still waiting for that semi-trailer of truncated chemical humanity ooze to sink below the surface, where I cannot see it, and to disappear forever. I keep waiting for Pharaoh to notice the Jewish kid that lives under his gold egg hat. The extra kid under foot that Gumby arms snatched from the jaws of the river god, the circumcised member of the uncircumcised tribe, the one he keeps swearing at for leaving his tops and toys strewn about the palace of the one true demigod. And now... finally, I can wonder, once and for all, why the jagged edges of my perceived reality are not blending wi

th the music bleating from under my hat — I can even wonder about why it just isn’t working... at all... again...

So, where does this story end? I am going to propose that we know the answer already. Somewhere, at the end of this page, there will be a clever little line to clue us all in. Somewhere, where we usually find the jet black numbers of the overdue bill circled in a blood red inkblot that has bled right through to the backside, the underside, the underbelly, we will be presented with a choice. When we see there, what our options are, we will feel both glee and horror, like a slasher film gone as campy as a carnival worker’s yellow pokadot bowtie. We will know that the play we had witnessed, the play that we took part in, wasn’t all for naught. We will still have a choice to make, but... alas... no time left to make it.