Tikun shveelim and someone else’s garbage 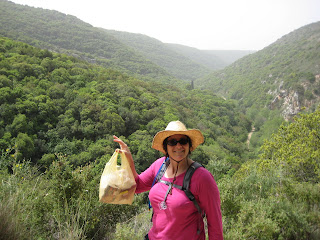 Recently, Adele and I went on a hike to a very nice part of the Country up in the north. It was a long hike and we pretty much covered every topic we could think of while on the way up and back to the same castle that I had visited with the Beit El teeule a few weeks back called Monte Fiord. This was a castle that was built in a canyon instead of on top of a mountain because it was meant to be a kind of Fort Knox for the Crusaders about a thousand years ago. They needed money to conquer the Holy land and this is where they kept it because it was very well protected from invading Arab (pre Muslim) armies. It was very interesting but the most interesting thing turned out to be a little trail maintenance that we did along the way.

We decided to pick up garbage on our trip up to the top and among all the variety of trash we found ample amounts of plastic bags to deposit it all in. as we picked up the trash, I noticed that people were taking notice so I decided to make a show of it and found myself hovering over some little stash of chip wrappers until the approaching hikers would notice what I was doing. As these hikers got closer, I noticed that they were Arabs. They looked at me with what I thought were curious expressions. My mind went through all kinds of variations on what they must be thinking. They seemed to be a family and when the last of them where just about to reach me, the man at the back with his little boy spoke to me. He was really happy to see us cleaning the trail and wanted to impress upon his kid how great it is to do what we were doing.

This really caught me off guard because all we had ever heard was that the Arabs litter like mad. I had even seen it happen once when I rode my bike past a group of picnicking Arabs and upon my return I saw that all of their trash was right where they left it. Then I really was caught off guard when the Arab said that he could tell that we weren’t Israelis because they just dump their trash everywhere and that they were the real perpetrators. We politely said that we have seen everyone littering and that we all need to clean it up. He said goodbye and I couldn’t help notice that he started to scan the ground as we parted ways.

A little further up the trail, we overtook a young Israeli couple having a rest. They also noticed us picking up trash and were very impressed. They each got a bag and walked with us up the trail to the top. We all felt so great to take care of the trail and even happier to see that people were noticing. At the last hair pin turn that wound up to the top the Israeli guy said to me that the Arabs are to blame for so much litter. I kind of snickered and told him what the Arab guy had just said. He got a shocked expression that then relaxed as he said, “it must be the Haradim then,” (those are the guys with the black hats and everything).

In the end, I learned something valuable about human nature. It seems that when it comes to litter, it is always someone else’s garbage…