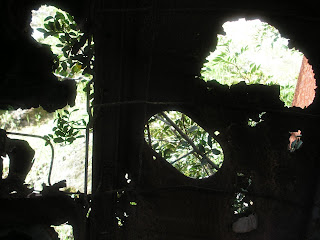 About a month ago, I got sick. It was not fun, starting with vomiting and ending with explosive diarrhea. I stayed home from work for a few days and towards the end of this stint answered my cell phone. Since I was home I wasn’t wearing my fancy new phone holder on my belt and when I finished the call, had no choice but to put the phone in my pocket… where I forgot about it. Then, about ten minutes later, was shocked to realize that I had had an accident… you know.

Well, I just stripped down to nothing, slammed the whole bundle in the washing machine, took a shower, changed clothes, and remembered my phone. Not again!!! I ran down the stairs, stopped the cycle, drained the washer, and eventually recovered my phone. It was a little wet but when I turned it on it worked. I dried it out and continued to use it. Whew… almost had to cash in on the stupid insurance thing I had to buy the last time to get a new phone, but the story isn’t over yet. You see, there is something called corrosion and when it gets into the electronics of a cell phone… see you later, alligator. And that is what did eventually happen. The phone made a flash of schizophrenic light across itself, before eventually freezing up for good.

I drove down to Hadera to get the phone fixed or replaced right after davening and cleaning the house for Shabbat. I knew exactly where to go and walked right in hoping that it wouldn’t be to long. I was able to conduct the whole conversation in Hebrew and felt like I understood everything that I needed to know, even the part about how the stupid insurance I had to buy didn’t actually cover if I lost the phone or if I had corroding problems. So, they charged me for a new phone. Now I was really getting pissed. I started to yell at the poor girl behind the counter (this is all in Hebrew by the way) and told her that if I threw my phone in the ground, stomped on it with my foot, and brought it to her in tiny pieces inside a plastic bag, that my insurance would cover it. I told her that all I wanted was to be happy with the phone and service and could she please see what she could do about getting the price down. She said she would see what she could do and left to speak with her manager.

When she returned she had a smile and said that she could knock the price down a-bit. It went from 152 shekels down to 144 shekels. Wow, at least it was something, I said. Ok, I gave her a nice smile, wished her Shabbat Shalom and Chag Sumeach and left to get my car. I pulled out of the lot and the guy at the gate took my parking pass that I had remembered to get validated, and promptly said that I went over the limit for Cellcom’s stamp and needed to pay 8 shekels. So…as far as I know, the time I spent haggling with the girl behind the counter was the time I went over for the parking.

On Yom Kippur we are told that the books are sealed as to how much money we will make in the coming year. I guess I was just not meant to have that 8 shekels, even though I tried hard to get it. Well, I did cause it to go from Celcom to the parking guy. Maybe that was what was really supposed to happen and if I really want to go mashugana about it, maybe that was why I got sick in the first place. Next time, maybe I will just drive by and give the guy 8 shekels and avoid all the hassle… well, then I would have missed all the fun wandering around the Hadera Shuk (open air market) practicing my Hebrew, almost getting ripped off for thirty shekels when I tried to buy a paper, and in the end, having this little blog to shoot out to all of you…