Anarchy, Gratitude, and the Well of Souls 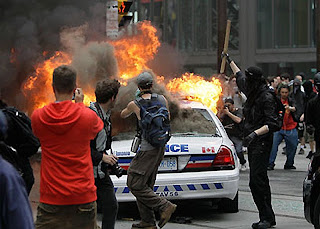 The G-20 Anarchy that recently broke out in Toronto is, I believe, only one more tiny, little step in the declining ability for western ideals and traditions to appease the masses. We are inundated with the mixed message of peace activism = protest, protest = opposition, opposition = violent upheaval, or in other words, if A = B and B = C, then A = C… Peace Activism = Violent Upheaval!!! And this is perceived by many as deserved, while most of the rest view it as maybe only a distraction from apathy…

This is exactly why a flotilla of armed mercenaries can pass for peace activists. If we muddy the translation enough, i.e. put legitimate peace activists together with violent protesters, our inclination is to either accept the violence as deserved, think about how this is just wrong and continue to feel helpless, or turn the channel and ignore it out of a desire to have fun and the fluffy surface of a lightness of being…

Last Shabbat, we discussed many things in the Holy City of Jerusalem; one of which was the concept of gratitude. We went around the table asking for each other’s opinions, little children and esteemed rabbis alike. The overwhelming focus from everyone seemed to be that without gratitude, all we can expect is a sense of entitlement, degenerating into a sense of apathy. I would like to take this (predicted by young and old) degeneration one step further and contribute that ingratitude will eventually lead to non-existence.

I know... "What 'is' non-existence?" you may ask. Well, we think we understand existence because we learned in science class that we are evolved from lesser life forms. We started as amino acids and randomly changed to single cell organisms. Then we split and became multi-cell organisms. Then we randomly developed... and developed... and developed... over millions of years into monkeys... Then, either an alien from outer space or Hashem (equally unbelievable) added our spark of soul or what in Hebrew we call a Nesham.... sscrieeetchh!!! Sorry, I was talking about non-existence and I seemed to have gotten off-track.

Let’s just continue with... If the world has any meaning at all, then we have to assume that there is some sort of purpose to it. And likewise, if there is no meaning, than there is no purpose either. Many, it appears, seemingly live without purpose; you know, live fast and die young. If we think about it, do we really believe that there is no purpose to life? If this is the case then why would there be something as random as the speed of light or even the end of the universe for that matter? A truly random world should appear much more like Alice in Wonderland where anything is possible... just because! It seems, if we decide to think about it, there are real consequences to our actions and real boundaries to existence.

So, this is the segue I have been waiting for; if our actions have consequences and the consequences mean something, than there is reason to exist! Are you following? So, if there is reason to exist, than it is our job to figure out what it is, so that we can do what we are supposed to do in this life. Since this life is really just a series of tests and challenges to reach our potential, then if we choose to watch it go by, we are really missing the point.

Now, back to gratitude... If we understand that we exist so that we can meet our challenges and grow ourselves in order to understand meaning, then we need to understand where it all comes from first. If there is an Infinite Being out there that needs absolutely nothing, all that Infinite Being can do is to give. We humans, being the ultimate receivers, are hardwired to take. In order to find meaning, we need to give and what is the first thing we try to teach our children? I believe that after we teach them to say Mama or Dada, we teach them to say please and thanks (they usually say no somewhere in-between, which really points at our natures as takers and not givers). We need to learn to give and when we do give, we feel great! We feel like we are the center of the universe! And then when we hear "Thank you," the whole struggle to give is made worthwhile. If that same Infinite Being didn’t ever hear thank you, how long do you think we would continue to exist? Not that that Infinite Being is petty, just that the reason for giving (our growth) would no longer exist. Our reason for existence would then disappear, along with us.

So what is The Well of Souls? If you look at the picture of the Even Shtiah (the Foundation Stone of the World that is currently under the little dome on Har Ha Bayit) real close, you can see a hole. This is prophesied to be the Well of Souls. Once upon a time, about 30 years ago, when I was a non-Jew, I went into the little dome on the Temple Mount and saw the Stone and the Well of Souls. It has a stairway that goes down, carved in the rock, and ends in a mysterious room. Many say that there is a crack that 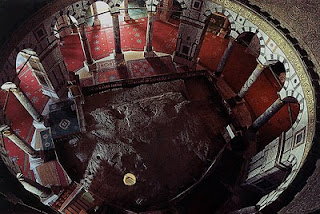 goes down from there to reach the belly button of the World. This is the place where, when Mashiach comes, will flow with fresh, sweet water, tumbling down from the Temple Mount and pouring into the canyons that surround the place that Hashem rested his presence in the world, thousands of years ago. One canyon is Gehenom or in English—Purgatory, the place where the Canaanites supposedly sacrificed their children and later, the Jews sent the azzazel ram off the cliff to wipe away their sins for the year. The other canyo

n to the east is the Valley of Souls, where the Mount of Olives, a massive mountain completely covered with Jewish graves of prophets, kings, and rabbis, descends to a barren plain at the bottom. A bridge once spanned this canyon that was built so as to temporarily create a barrier under the arches so that the Kohenim could travel across it without becoming impure. It is a place of deep wonder and soulful memory. It resonates with history, culture, spiritual highs and lows, and the depths of the unknown. The entire area pulsates with a tensioned calm, seemingly waiting for something almost miraculous to occur.

OK, now that we have a minor understanding of the Well of Souls, aren’t you thankful that there is meaning in the world? Without the Foundation Stone, we would not be here; so, the next time someone asks you how you are doing, say to them, “Thank God” or in Hebrew, “Baruch Hashem,” then, with out a doubt, you will really be living.

For you Jews out there, have a good fast tomorrow, and for all of you humans out there, remember that there is meaning in every instant that you exist and make the most of it!